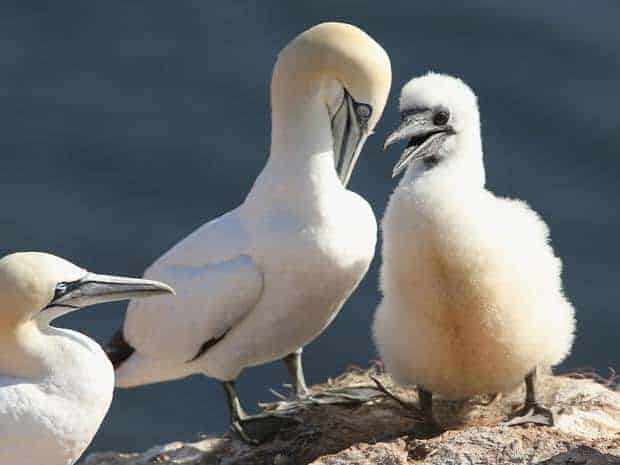 The first “world championship” for eating pickled baby gannets, known as “guga”, has sparked new calls for a total ban on the Hebridean tradition of hunting chicks by clubbing  them with sticks.

The inaugural world guga-eating contest takes place tonight at Ness Football Club on the Isle of Lewis. Its social club is staging the competition despite opposition from animal rights campaigners, who claim the hunting method is cruel.

Twenty contestants will race to eat half a gannet chick with a side dish of potatoes in the quickest time.

The birds are hunted on Sula Sgeir, a rocky, uninhabited islet 40 miles north of Lewis. It takes the first part of its name from the old Norse word for gannet, and residents of Ness district are awarded a special licence to cull 2,000 gannets each year. It is the only place in Britain that hunting seabirds is still allowed after a ban was introduced in 1954.

The chicks are killed with a stick, decapitated, singed in fire and then pickled – producing a delicacy that has been enjoyed by islanders for hundreds of years. Fans describe the taste as something between duck and salted mackerel.

The Scottish Society for the Prevention of Cruelty to Animals has repeatedly called for the annual hunt to be banned, saying: “Brutalising animals in this way under the guise of tradition has no place in modern society.”

The charity says it is concerned that many of the birds will not be killed by a single blow. But hunters insist the deaths are quick and humane. The chicks are eventually sold for more than £20 a pair. Hunters also send the dish in vacuum-sealed packs to relatives around the world with demand so high that the gugas have to be rationed.

Libby Anderson, of the Scottish animal protection charity OneKind, said: “We have no objection to people having fun with food but not when it involves unnecessary animal suffering. The guga hunt is no longer carried out for subsistence reasons but to provide a delicacy that is eaten by a fairly small number of people.”

Donald Macsween, the football club’s vice-chairman, who is organising the championship, said: “The hunt is still as fiercely defended in Ness as it ever was, although criticism of it today seems to arise from far-off places – from people who appear to have little clue what they are talking about.”

Writing on his blog, he added: “I suppose it is a sign of the times and the reactionary social media culture that we have, that these ‘campaigns’ raise their heads, disappearing as quickly as they appear. The ill-informed rants that appear don’t worry me at all, only anger me. I am an animal lover. I rear plenty myself and care about their welfare. I personally have no issue at all with the methods used to dispatch the guga.”

Although the practice of eating pickled gannets is rare, Gordon Ramsay promoted the dish while filming The F Word a few years ago. The chef was served guga and black pudding at Digby Chicks in Stornoway during his trip to Lewis for the Channel 4 show.

Libby Anderson, from Scottish-based animal protection charity OneKind (corr) said yesterday/on Friday: “We have no objection to people having fun with food, but not when it involves unnecessary animal suffering. OneKind has raised the animal welfare issues surrounding the guga hunt over the last decade and we support the Scottish SPCA in calling for the licence to be revoked.

“The guga hunt is no longer carried out for subsistence reasons, but to provide a delicacy that is eaten by a fairly small number of people. The fact that it is to be the subject of a competitive eating event only confirms that it is no longer a matter of necessity, but an anachronism.”

We invite you to vote FOR or AGAINST the banning of the gannet chick-eating championships. Even if you’re not from Scotland, please vote and also leave your comments at the bottom of this page.

Ban Gannet Chick Eating Contest on the Isle of Lewis

The editorial content of this article was written and published by the Independent.