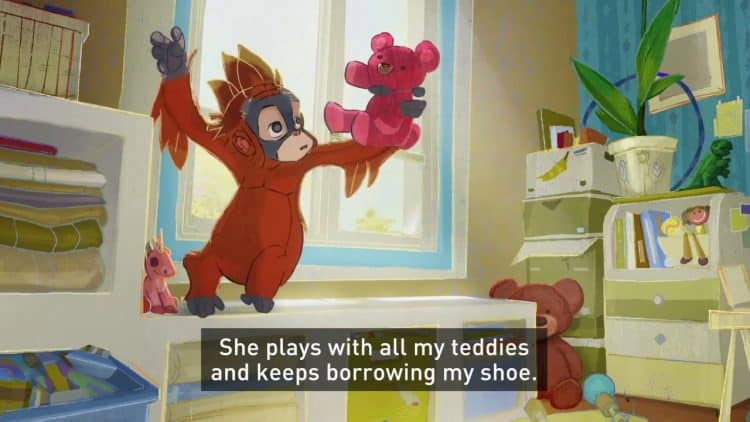 Major retailers enter a battle every Christmas to make us cry with their saccharine seasonal ads – but this year we already have a clear winner.

Concern about our planet has never been greater, thanks to last month’s UN report warning that we have 12 years to stop irreversible damage to the Earth. Yet, one month on, a supermarket’s Christmas advert showing the damage palm oil is doing to the natural world has been deemed too political to put on TV. If that doesn’t make you weep, I’m not sure what will.

Iceland repackaged a short film by Greenpeace showing the destruction of an orangutan’s rainforest habitat due to palm oil growers. Palm oil is about as unsustainable as it gets, and contributes to habitat loss and the endangerment of species, including elephants, rhinos, tigers and orangutans.

In a move that has been widely criticised, Clearcast, which approves ads on behalf of broadcasters including Sky, Channel 4 and ITV, says it couldn’t clear the Iceland ad against the rules of the Broadcast Code of Advertising Practice. The Advertising Standards Authority, which has the authority to rule on Clearcast’s decisions, says it has had “no role” in this case.

But rather than protecting the public from insidious political messages, Clearcast has prevented a crucial message being broadcast to millions of viewers, many of whom buy products containing palm oil without knowing the devastation it’s causing to animals and global warming. Protecting and restoring forests would achieve 18% of the emissions mitigation needed by 2030 to avoid irreversible climate change, a group of 40 scientists said last month.

While deforestation is “just as urgent” as eliminating the use of fossil fuels, the scientists warned that the importance of forests risks being overlooked by the world’s governments. And there is evidence suggesting this isn’t likely to change in the near future.

This year, Greenpeace’s Unearthed revealed correspondence between the Ministry of Defence, the Department for Environment, Food and Rural Affairs, and the British high commission warning that supporting an EU ban on the imports of palm oil in biofuels could put at risk defence deals with Malaysia – one of the world’s biggest producers of palm oil – to replace its fleet of fighter jets with British-built Eurofighter Typhoon aircraft.

You won’t see our Christmas advert on TV this year, because it was banned. But we want to share Rang-tan’s story with you… 🎄 🐒
Will you help us share the story?https://t.co/P8H61t6lWu

While fundamental change needs to happen at a political level, businesses also play a massive role in enacting structural and social change, and Iceland is leading the way by putting its money where its mouth is. It will be the UK’s first major supermarket to stop using palm oil as an ingredient in all its own-label products by the end of 2018.

That’s no easy feat, since palm oil is found in thousands of supermarket products, from biscuits to cosmetics to cleaning products, and is integral to the global supply chain. Latest Greenpeace research found that 25 palm oil groups had cleared more than 130,000 hectares of rainforest in the last three years, while companies including Nestlé, Johnson & Johnson, Unilever, Mondelez, Mars and Kellogg’s buy palm oil from companies deemed destructive by Greenpeace.

In the fight against palm oil, money has been the clear winner so far. This is exactly why arguments against the human destruction of the planet shouldn’t be silenced, and why Iceland’s animated film of a friendly orangutan shouldn’t be banned for being too political. What’s really political in this scenario is the banning of a video containing facts that are in the interest of viewers, and apparently against the interests of some politicians.

Iceland has uploaded the video to YouTube instead, but the damage is already done. Clearcast’s response sends out the message that businesses can’t shout about the good things they’re doing to be more sustainable.

Iceland’s managing director, Richard Walker, says its Christmas ad was the retailer’s “first chance to prove we can put commercial interests to the side in order to make the changes required to save our planet in the aftermath of the landmark UN report”. But, he says, it failed.

Businesses aren’t the most obvious winners in a battle for environmental consciousness, but, in this case, Iceland is setting a shining example of how a retailer can attempt to help the planet, and shows that commercial interests and climate change don’t have to be in conflict. There are massive failures here – but not from Iceland.

This article was first published by The Guardian on 09 Nov 2018.

We invite you to share your opinion whether Iceland’s Christmas ad about palm oil should have been banned? Please vote and leave your comments at the bottom of this page.

Thank you for voting and please sign the petition: Save Rang-tan. End dirty palm oil..