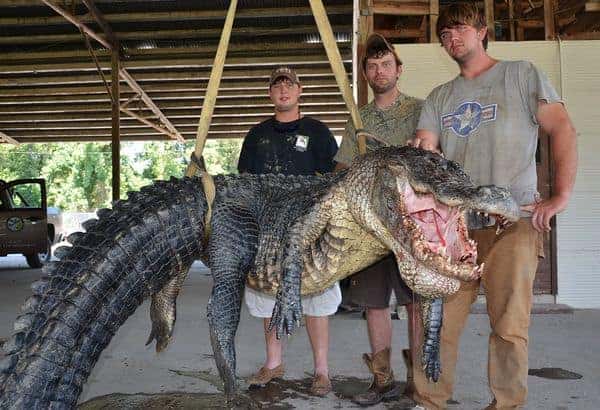 Two record-setting heavyweight alligators were killed by hunters in Mississippi this weekend, just three days into the start of the official gator hunting season. One animal, a male, was 13-feet and 6.5-inches (4.13 meters) long and weighed 727 pounds (330 kilograms).

“When we finally got an arrow in him, it took us another two hours to get him up close to the boat,” Dustin Bockman, one of the hunters, told the Associated Press.

“He broke all the lines we could get in him. Finally we got a snare on him and pulled him up high enough and got a shot on him. All in all, it probably took us four-and-a-half hours to actually catch him from the first time we saw him.”

Both alligators broke the previous weight record of 697.5 pounds (316 kilograms).

Once considered an endangered species, the American alligator population has bounced back in recent decades and was delisted in 1987.

We spoke to Greg Robbins, a senior animal keeper at the Los Angeles Zoo, to find out more about the species and whether it is normal for them to grow so large.

What did you think of the record-setting alligators caught in Mississippi this weekend?

It’s unusual to find alligators that big now. In the old days, it was fairly common. You’d read books from back in the day, especially when they first started settling Florida, and some people described alligators as being bigger.

Our largest gator was a male that passed away several years ago. He was under 500 pounds (227 kilograms), and he was a big gator. But this thing was nearly 300 pounds (136 kilograms) heavier than ours. It looked like a good-sized alligator.

How big can American alligators get?

They can continue growing their entire lives. When they’re older, the growth is very minimal. But generally for alligators and crocodiles, they’ll grow a foot a year for the first five or six years. And then they continue growing, but it’s usually at a slower rate.

In captivity, people can make that happen faster through diet and feeding them more often.

Are males always bigger than females?

In crocodilians [which includes alligators and their crocodile cousins] males are always bigger than females.

Is it legal to hunt alligators in the U.S.?

American alligators were taken off the endangered species list a few years ago. It kind of shows the success of the wildlife management that the alligators have come back.

In most of the southern states now, there’s legal hunting and they have tags, kind of like deer hunting season. They usually have a certain number of tags a year that people apply for and then they can hunt [the alligators].

Do you agree that it should be legal to hunt alligators?  Please vote and also leave your comments at the bottom of this page.

This article was written by Ker Than for National Geographic.