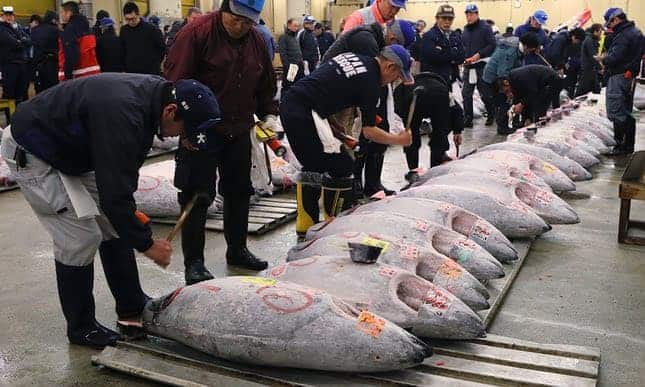 Conservation groups have called on Japan to abide by international agreements to curb catches of Pacific bluefin tuna after reports said the country was poised to exceed an annual quota two months early – adding to pressure on stocks that have already reached dangerously low levels.

Japan, by far the world’s biggest consumer of Pacific bluefin, has caused “great frustration” with its failure to abide by catch quotas intended to save the species from commercial extinction, said Amanda Nickson, the director of global tuna conservation at Pew Charitable Trusts.

“Just a few years of overfishing will leave Pacific bluefin tuna vulnerable to devastating population reductions,” Nickson said in Tokyo on Monday. “That will threaten not just the fish but also the fishermen who depend on them.”

Decades of overfishing have left the Pacific bluefin population at just 2.6% of its historical high, and campaigners say Japan must take the lead at a summit in South Korea this summer.

In 2015, Japan and other members of the Western & Central Pacific Fisheries Commission agreed to curtail catches of immature bluefin, halving the catch of fish under 30kg from the average caught between 2002 and 2004.

But Japanese media reported last week that the country would reach its catch limit for younger tuna for the year through to June two months early.

Some fisheries workers have ignored the restrictions, aware that they will not be punished and can fetch premium prices for Pacific bluefin in Japan, where it is regarded as an important part of the country’s culinary heritage.

Campaigners support the fisheries commission’s aim of rebuilding stocks to at least 20% of unfished levels by 2034 – a target Nickson said was “realistic and attainable”. She said further inaction could revive calls for a two-year commercial moratorium on catching Pacific bluefin.

“No country in the world cares more about the future of tuna than Japan,” she said. “Japan can take the lead, but it must start by committing itself to the 20% rebuilding plan.”

If that fails, she added, “then a full commercial moratorium could be the only feasible course of action”.

Aiko Yamauchi, the leader of the oceans and seafood group for WWF Japan, said it was time to penalise fishermen who violated catch quotas. “The quotas should be mandatory, not voluntary,” Yamauchi said. “That’s why the current agreement hasn’t worked.”

About 80% of the global bluefin catch is consumed in Japan, where it is served raw as sashimi and sushi. A piece of otoro – a fatty cut from the fish’s underbelly – can cost several thousand yen at high-end restaurants in Tokyo.

This article was first published by The Guardian on 24 Apr 2017.

We invite you to share your opinion whether Japan should be sanctioned for exceeding its bluefin tuna quota? Please vote and leave your comments at the bottom of this page.