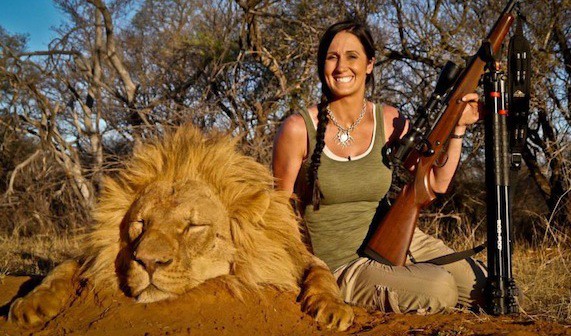 International indignation over the canned hunting of lions in SA is growing, writes Martina Polley.

Lions are majestic animals, the alpha predators of the African bush. We think of them as roaming wild and free across the plains. But this is far from the reality.

South Africa has a population of about 2750 lions in national and private game reserves – and almost twice that number caged in pens.

Since 2007 the conservation spotlight has been focused on rhino poaching. But looming as large is the intensive breeding of lions and other predators for the hunter’s bullet.

These animals are being bred specifically to be shot in relatively confined or enclosed areas with little to no chance of escape. Canned hunting or ‘captive hunting’ as the breeders and hunters call it, is still legal in South Africa.

“In this day and age is it appropriate that we breed lions in cages and other confined enclosures so people can shoot them for fun?” asked Ian Michler, who has been researching and campaigning against these industries for over a decade.

When Michler started his research at the turn of this century, “there were 500-800 predators in cages in South Africa. Iin 2006 it was up to 3500 and now there is anywhere between 6000 to 8000 predators in confinement.” Most of these are lions.

Pieter Potgieter, chairman of the South African Predator Association said the breeding and hunting of captive- bred wildlife was acceptable, “an international practice in line with the principle of sustainable use of wildlife resources.”

According to Potgieter about 200 individuals and institutions have permits to keep and breed lions in South Africa. About half of them are members of the predator association.

His views are supported by the Professional Hunters Association of South Africa.

“We have raised the bar higher than is needed,” said Adri Kitshoff, CEO of  the association in an April interview with Financial Mail. “Among standards set, a lion must be released at least seven days prior to a hunt in an enclosure of at least 1000ha.”

In 2012 about 617 lion were hunted for trophy purposes, with fewer than 10 estimated to be wild lions, according to the Department of Environmental Affairs.

Who is responsible for regulating the shooting of lions? No one it appears.

The department has said that “the hunting of captive-bred lions relates to an ethical matter that does not fall within the legislative mandate of the minister of environmental affairs.”

Michler said: “Other than provincial fencing requirements, there seem to be no rules or regulations governing canned lion hunting. That is why the government can wash their hands of it.”

Lions also don’t fall under the auspices of the NSPCA because they are not categorised as domestic animals. “Everyone can expolit them,” said Michler.

The department tried to put the brakes on the industry in 2005 by introducing legislation prescribing that captive bred lions had to be released into a wildlife system for 24 months before being hunted. The South African Predator Association – formerly the South African Predator Breeders Association took the then minister of environmental affairs, Marthinus Van Schalkwyk, to court to challenge this. It lost the first round, but in 2010 the Supreme Court of Appeals ruled in its favour on a technical issue.

Since that case the department has taken no further steps to address the breeding and hunting of lions.

Tourism professionals such as Colin Bell, co-author of Africa’s Finest, a listing of responsible and sustainable safari destinations, is concerned about the impact of the breeding industry on what he terms Brand South Africa. “Are we going to allow a small number of people to tarnish South Africa’s international reputation as a responsible tourism destination and have a negative impact on our international long-haul tourist arrivals?”

International indignation is growing. “The fact that it’s actually legal here . . .   this horrifies most international audiences,” said Michler who travelled to Europe and Australia this year to speak to governments about the practice.

Michler said  it was important to address the international community to try get it to become part of the solution. ”The killing is taking place in Africa, but the killers are coming from outside the continent,” he said.

The good news for predators and those opposed to these practices is that momentum is growing in the international community to ban the importation of lion trophies.

Greg Hunt, Australia’s environment minister, weighed in on the issue last month in a TV interview, saying: “It’s not fair, it’s not humane, it’s not 21st century. On my watch it’s not acceptable.”

Hunt said his government would consider a ban on the importation of lion parts and lion trophies into Australia.

Last month, the US Fish and Wildlife Service proposed listing the African lion as threatened under the Endangered Species Act. The listing, if finalised, could also establish a permitting system for the importation of sport-hunted lion trophies, requiring that the lions originate from countries with a scientifically sound management plan for African lions.

We invite you to share your opinion whether “Lion Canned Hunting” should banned in South Africa. Please vote and also leave your comments at the bottom of this page.

This article was first published by ConservationAction.co.za on 09 Nov 2014.