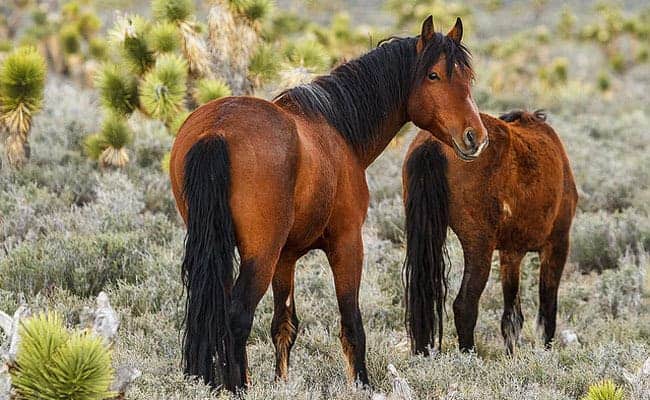 Thousands of wild horses are living peacefully on public lands in Nevada right now, completely unaware that the government is coming for them soon. They will be rounded up this fall, and their advocates are raising serious concerns that they will be sent to slaughter, along with thousands of others.

Tragically, the Bureau of Land Management (BLM) has failed, and continues to fail, to uphold its duties under the Wild Free-Roaming Horse and Burro Act, which was intended to protect wild horses from “capture, branding, harassment, or death.” It was enacted in 1971, after Congress officially recognized the value of wild horses as “living symbols of the historic and pioneer spirit of the West.”

Despite that, the agency has continued to remove and warehouse thousands upon thousands of wild horses at the expense of taxpayers – a vast majority of who strongly oppose the agency’s incredibly cruel, wasteful and ongoing mismanagement of these American icons.

Unfortunately, those who are supposed to uphold the letter and spirit of the law are increasingly beholden to special interests, including livestock and extractive industries, that want to see wild horses exterminated from their rightful place on public lands.

Now, under the Trump Administration, the situation for wild horses could get even worse.

Charlotte Roe, a former science attache and environmental policy officer with the State Department noted in a recent op-ed, that in Nevada alone, the BLM intends to round up nearly 1,000 wild horses “to achieve its absurdly low population target of 60 adults and foals, leaving one horse per 10,000 acres. In the huge Antelope Valley and Triple A Complex, the BLM plans to remove over 7,000 mustangs.”

Sadly, Nevada’s wild horses aren’t the only ones being targeted for upcoming roundups, and their lives are all now in danger.

The House Appropriations Committee recently passed the Stewart Amendment as part of the 2018 budget, which would allow the BLM to kill 92,000 healthy wild horses who are currently in holding, in addition to those who are deemed excess on the range. Some lawmakers did step up to stop this, but they were shut down before their own amendments could go to the floor for a full vote.

Although the situation is looking increasingly dire for wild horses, there’s still hope that Congress will act to protect them from further roundups and slaughter. Wild horse advocates have continued to oppose any measures that would allow slaughter, and have continued to advocate for these American icons to be humanely managed on the range.

We invite you to share your opinion whether Nevada’s wild horses should be protected from roundups and slaughter? Please vote and leave your comments at the bottom of this page.