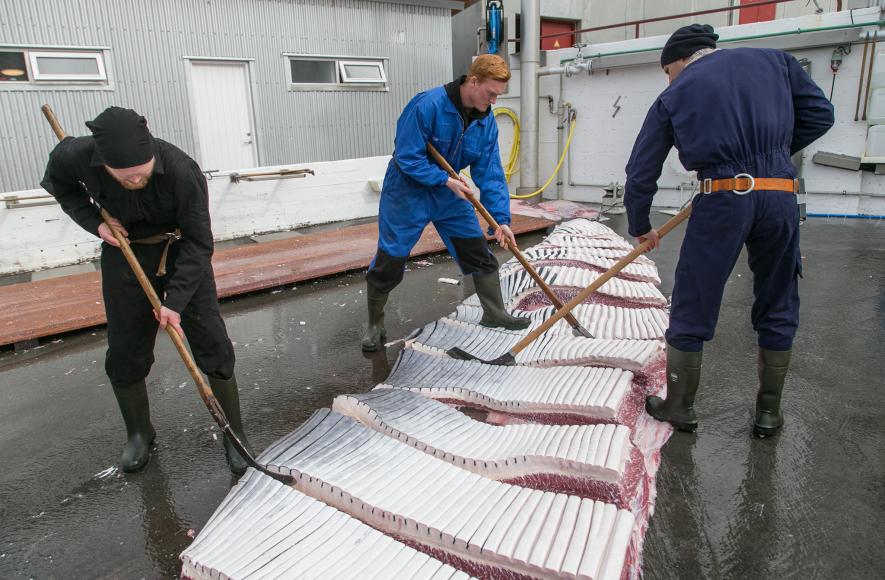 In just a few days, Norway will start up a horrific annual tradition — the ruthless slaughter of hundreds of whales. But we’ve got a strategy to say ‘NO WAY!’

Whales are awe-inspiring, beautiful beings. We now know they communicate with each other in song, and experience human-like emotions. But in Norway, every year these amazing creatures are hunted down and killed, then hacked apart to become animal feed and ingredients in beauty products. It’s unbearable.

Norway has managed to slip under the radar as the #1 whale slaughtering country. But if we now rally unprecedented global outrage, we can push Europe to close its ports to Norway’s whalers. We did it with Iceland — let’s do it again!

Workers cut up fin whale meat in Iceland in 2015. Iceland and Norway are the only two countries that have commercial whaling programs. Photograph by Arnaldur Halidorsson, Bloomberg, Getty Images

Sign the petition to the Norwegian government, the European Commission and all leaders of countries that allow Norwegian whale shipments to pass through:

“As concerned global citizens we appeal to the Norwegian government to end the whale slaughter, and to all others to close your ports to Norwegian whale meat shipments. Your decision will set precedent that could save thousands of whales, and help stop whaling across Europe.”

This article was first published by Avaaz.com

We invite you to share your opinion whether Norway should stop the annual slaughter of whales? Please vote and leave your comments at the bottom of this page.

These sick sociopaths have other job opportunities in the year of 2017, they just refuse to evolve.

Yes, the same way Nazis should have quit the Holocaust, neither whales nor the Jewish people did anything deserving such horrors.

This needs to stop Whales are vital to the eco system by cleansing the air when they dive they stir up air cleaning microbes. Without whales doing that the air would be a hole lot dirtier.

Those poor innocent whales have the right to live, just like we do. They have not done anything wrong to us. PLEASE LEAVE THE WHALES ALONE! STOP KILLING THEM!!!! KARMA!!!!

Not necessary in today’s world!!!

Well seriously why are you asking such a stupid question when you know the answer?

Its not good but the world is unable to stop the Japanese.

We are killing off the animals faster than many of them can breed. OK, not everyone will want to go vegetarian but come on, do we really need to kill so much at one time and stockpile so much? Moreso the question when other parts of the world are living and dying with starvation? Too much stockpiled animal goods have cheapened it. We no longer look at it as a luxury but more something that can be wasted. Back in wartime when food was rationed, we made the most of everything we had, nothing was wasted and it was considered… Read more »

I find it so sad and terrible that Norway, Iceland and Japan still hunt and kill these beautiful, intelligent whales – This horrible killing must stop – we’ve barely begun to know how valuable the whales are and how they communicate with each other – how they stay together and protect each other – Wake up Norway – you are giving your country a bad name throughout the world – Shame on you – you are killing off a wonderful species that is necessary to our environment and the sea – – In this Poll – 95% of those voting… Read more »

Sadly, we live in a world where the media, advertisers, so-called professional people (dieticians, uninformed doctors, uninformed parents, and all the businesses that make money off the cruelty and exploitation of animals run the show. But, little by little, more and more people understand that we don’t need any of this to live quality lives. We may not be able to change this as quickly as we want, but everyone must pay for what they do. I hope these people and all other animal abusers meet their karma – soon.

I agree and do not understand why more ppl. don’t see it. It’s so obvious~!!!!

We need to exterminate each and every scumbag animal abuser/killer.An eye for an eye.

It’s way past time to STOP killing other life on this planet….All life matters~!!!