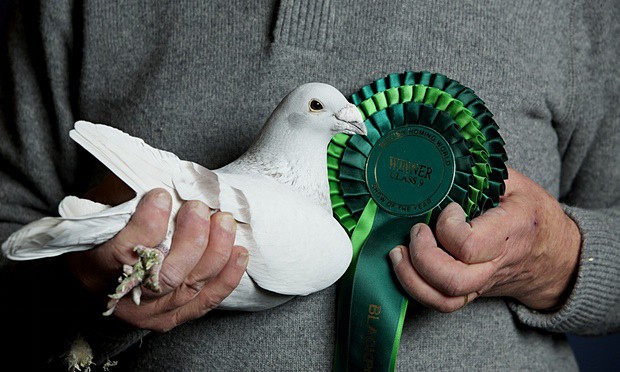 Feathers are flying in the bird world. Potential changes to the law, following a campaign by pigeon fanciers to reduce attacks on their pets by raptors, have met with opposition from the RSPB.

The Raptor Alliance, a body representing many of the UK’s 42,000 pigeon owners, is writing to MPs warning that an “iconic traditional British sport” is under threat as a result of an increasing number of attacks on their birds.

It has been buoyed by news that the Law Commission is considering changes to the 1981 Wildlife and Countryside Act that will allow individual pigeon fanciers to make applications so that problem raptors, such as peregrine falcons or sparrowhawks, can be relocated.

“Pigeon racing will disappear from our country unless something is done to protect our birds,” said Stewart Wardrop, representative of the Raptor Alliance.

A million racing pigeons are bred each year in the UK, with a pedigree racing pigeon sometimes worth several thousand pounds. In 2012 a Chinese businessman paid $300,000 (£197,000) for a Belgian racing pigeon called Bolt.

Some studies suggest that around 14% of birds that did not return to their lofts were taken by raptors, but Wardrop said the true figure was much higher, running into the hundreds of thousands.

“In law, there is no protection for racing pigeons,” he said. “If your loft is being attacked by raptors, apart from using harsh words to shoo them off you can’t really do anything. Because the number of raptors has grown and grown, pigeon lofts are effectively becoming larders. They just know that at seven o’clock every morning the pigeon fancier lets his pigeons out and breakfast is served.”

Wardrop stressed that the alliance was not seeking a blanket cull. “The licence requirements will be exacting. They must be evidence based, prove suffering or loss, and that all necessary diversionary actions have been taken, before an application can be made.”

He said the licences would allow pigeon fanciers to target specific areas. “Pigeon fanciers accept losses, but the numbers have grown so big. My father has lost three birds this year, but someone 400 yards away from him has lost 30. Raptors are marvellous creatures but there should be space for all of us.”

Part of the problem, the alliance suggests, is that raptors are seen as species in decline. Raptor nesting boxes are being put up on churches and other communal buildings. “If you encourage peregrines to perch on steeples, you will decimate the sport of those 15 pigeon fanciers who live in the village.”

The alliance claims that the pigeon racing industry is worth £125m a year to the British economy. But it has fallen a long way from the heady days of the 1960s and 70s, when famous footballers dabbled in the sport.

“Some 100,000 [people] were involved in the 60s,” Wardle said. “Nowadays, famous footballers buy racehorses; in the 60s they had racing pigeons.”

Grahame Madge, an RSPB spokesman, disputed claims that raptors were increasing in number. “Despite claims to the contrary, the populations of peregrine falcons and sparrowhawks are not increasing. In fact, evidence suggests sparrowhawk numbers have declined over the last 20 years. Birds of prey are wild birds and we see no argument for, or benefit in, artificially managing their populations.”

Madge said it was wrong to blame raptors for the deaths of many racing pigeons. “Studies have shown that around six out of every seven racing pigeons failing to return go missing for other reasons, such as becoming disorientated or colliding with obstacles.”

And he questioned the feasibility of relocating raptors. “There is no strong evidence that relocating sparrowhawks would achieve any benefit and, in fact, we remain concerned that this could lead to effects on the population, which is already in decline. Some birds could find their way back to their original territories, or their absence could create a vacant niche encouraging other birds to move in.”

This article was first published by The Guardian on 06 Sep 2015.

We invite you to share your opinion whether raptors should be culled to protect racing pigeons? Please vote and leave your comments at the bottom of this page:

Oh for petes sake NO!!

Where do humans have the right to dictate what animals should die, just so humans can enjoy using animals for their pleasure. Aragant,selfish humans!!

Many racing pidgeons fly into overhead cables or have accidents, some are young and inexperienced so lose their way and are taken by other predators, rats certainly will take if on the ground. I have had a number of racing pidgeons appear in my garden injured, I have been told by a pidgeon racer even if you try to contact the owner and they take the bird back it will be killed so surely as Duane has commented natural culling has it's purpose.

You fail to mention that pidgeons are released for a race some times hundreds of miles away from the loft, alot can happen in that tme. In fact you should welcome the natural culling as the better birds will not be taken, regardless how good you think the taken bird was, it was inferior in some way.

Of course not, never "cull" aka: murder a species for another species. And never for an exploitation for human reasons. If there is an unbalance in nature, intelligent humans of the twenty first century can come up with a compassionate and patient method to undo the damage humans have caused with non-lethal methods.

How many more of our wild animals are they going to try and kill off – goes, badgers now they want to kill off birds of prey??? Racing pigeons are not a natural thing to our sky's so why should we protect them – it's nature if they get killed it's not like somebody is out there letting the birds loose on them for fun.

1n the late 70's early 80's there were one or two pairs of peregrines in northumberland, there is nearly a hundred now, every cathedral in the uk now has a pair, unknown untill very recently, peregrines are commoner now than ever known having increased by 200% in some areas. as a falconer who has no legal access to wild peregrines i could not vote for a cull, but why not some middle ground like a licensed take for falconry in troublesome areas?

The day they allow pigeon fancers to legally kill birds of prey I am buying an air rifle and taking up shooting racing pigeons: they are not part of our natural wildlife but they can be put to good use: they are tasty in a pie or as part of a warm salad.

Birds of prey hardly catch a healthy pigeon and lot of pigeons know how to avoid being caught by a falcon peregrine.

Racing pigeons are not pets. They can make a lot of money for their owners and any that don't make the grade will be killed. It's the sport the owners want to protect, not the birds.

Birds of prey are doing what comes naturally. Racing pigeons? Not natural. Not a 'sport'. Put an end to THAT.

Birds of prey are doing what comes naturally. Racing pigeons? Not natural. Not a 'sport'. Put an end to THAT.

All so called sports involving animals/birds seem to involve removing our treasured and beautiful wildlife to aid racing or shooting animals bought in or bred for that sport. When is the destruction going to stop? When there is no more wild animals left to destroy? This line of extremely selfish thinking has got to stop !

It's an unholy truth that this government's reaction to all things wild is to kill them. It's a policy of Countrycide; destroying all that is magnificent about our wild spaces.
Well said, Mike Berwick.

This seems crazy to me. Cull wild birds because they are infringing on captive bred racing birds???? That clearly makes no environmental sense at all. Birds are top of the chain, they have to be there and when they are it's a sign of a healthy eco system. Cull the raptors and you unbalance the eco system. Get rid of the racing pigeons and nothing will change. Need and benefit.

Majestic raptors contribute to wildlife tourism and health benefits which are estimated to be worth £Billions to the economy! I wonder how many of the pigeons claimed to be raptor kills are actually shot or poisoned by farmers/shooting estates and also what links the Raptor Alliance have to the gamebird industry with their vested interest in predator removal, history of raptor persecution and antipathy to wildlife protection laws. In my experience some (but not all) racing pigeon owners refuse to pay for veterinary treatment and don't want their birds back if they are injured (or just exhausted) and rescued.

Please sign and share this unbelievable rationale for killing raptors!! These people must be told that racing pigeons has no place in this century!! The audacity of selfish arrogant cruel humans who would kill nature for their vile pleasure!