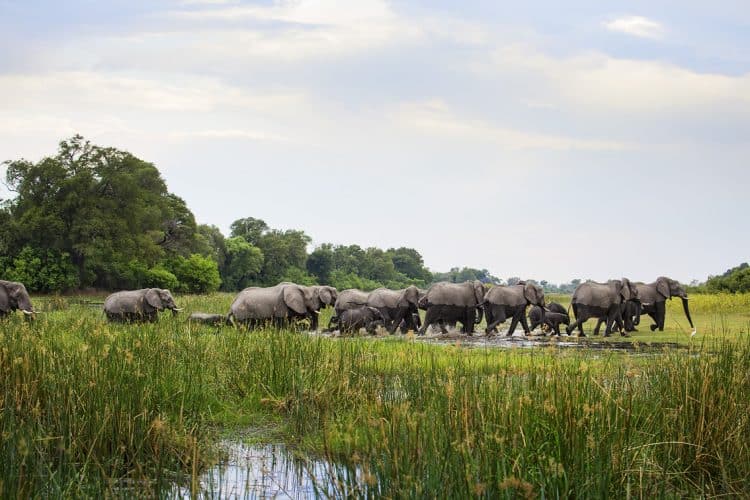 CHOBE NATIONAL PARK, Botswana — As we travel by jeep through the mainly mopane scrub of northern Botswana, along the Linyanti River, signs of the significant presence of an iconic heavyweight are evident. Knocked-over trees litter the earth, many with the bark stripped off their trunks.

This is the work of the African savanna elephant, or African bush elephant (Loxodonta africana), a keystone species that shapes the very environment it moves through, opening up the scrublands and benefiting other species, such as kudu and impala, which we pass grazing in an opening.

We stop by the river, and within a few minutes a herd of elephants, adults followed by some juveniles, come down to the water’s edge to drink. They all bear tusks of various sizes. But even here, as in the rest of Africa, the legendary “tuskers,” historically defined as having tusks that weigh at least 45 kilograms (100 pounds) each, have been nearly been wiped out.

“The big tuskers are gone, they have all been shot,” says Ban Shakwa, our guide, who works for the tour operator Wilderness Safaris.

Africa’s elephants aren’t bounded by national borders. Landlocked Botswana is surrounded by Zimbabwe, South Africa, Namibia and Zambia, all countries with significant elephant populations of their own.

The highly intelligent pachyderms migrate to where they feel secure, and have over the years found a refuge in Botswana, where a ban on hunting big game has been in force since 2014, alongside a “shoot-to-kill” policy to counter poaching, which saw troops deployed to national parks and anti-poaching units armed with automatic weapons.

Today, Botswana is home to 130,000 elephants, more than any other country, and a third of all the elephants in Africa.

In Botswana, a country slightly larger than France, about 40 percent of the land is set aside for conservation through national parks and private reserves. While in theory that gives elephants room to roam, in practice they’ve tended to encroach onto farms and human settlements, destroying crops and homes and threatening lives. The country’s large elephant population has therefore become a “success story with a cost,” says Robert Taylor, a conservation ecologist with Wilderness Safaris, as he points to the devastated landscape.

Taylor, originally from South Africa, says the elephants in his home country are mostly contained to fenced areas, whereas in Botswana they roam freely — but change behavior when they come into contact with people.

“Elephants which have raided crops in Namibia and come back to Botswana are aggressive, while elephants that stay in protected areas are relaxed,” he says.

That points to a growing risk of human-elephant conflicts, as the pachyderms vie with rural communities for land, food and water resources. It’s a problem the government is well aware of and trying to balance.

“The problem with too many elephants is that they compete for space with growing populations,” Otisitswe Tiroyamodimo, director of Botswana’s Department of Wildlife and National Parks (DWNP), tells Mongabay.

The proximity of elephant herds to populated areas also means it’s easier for poachers to target the animals, he points out.

The last study undertaken to determine the country’s carrying capacity, or maximum elephant population that it can sustain, was carried out in the 1990s. It yielded a figure since exceeded nearly threefold: just 50,000.

Shortly after Mokgweetsi Masisi took office as Botswana’s new president last April, he ordered a review of the hunting ban imposed by his predecessor, Ian Khama. The committee of ministers reviewing the ban has now submitted its report, which includes a set of proposals aimed at getting the elephant population under control. These include an end to the hunting ban, allowing a cull of elephants, and permitting the industrial canning of elephant meat for pet food.

“I can promise you and the nation that we will consider it,” Masisi said of the set of proposals, as reported by the BBC.

A less lethal solution as far as the elephants go is already in the works, and it’s one that builds on the fact that a large portion of Botswana’s elephants come from outside the country.

KAZA is the Kavango-Zambezi Transfrontier Conservation Area, established in 2011 as a conservation, tourism and sustainable partnership between the governments of Botswana, Namibia, Zambia, Zimbabwe and Angola. It covers more than 500,000 square kilometers (193,000 square miles) of protected areas where the borders of the five countries converge — an area the size of Spain — and in Botswana incorporates Chobe National Park and the Okavango Delta. A key aspect of the partnership is the creation of wildlife corridors, which allow animals to safely migrate between habitats in the neighboring countries, and which have already proved beneficial for Botswana’s elephants.

“KAZA is developing but needs assistance,” Tiroyamodimo says. “The corridors will be part of the solution to allow elephants to spread throughout the KAZA states.”

Allowing the elephant population to disperse over a wider area should help ease the population pressure inside Botswana and reduce the incidence of human-elephant conflict. Without such a transboundary solution, Tiroyamodimo says it’s impossible to increase the areas where elephants can roam inside the country.

Ernest Mokena is someone who knows all too well about the kind of damage a herd of free-ranging elephants can do in human settlements. “We put chili on poles surrounding the fields — to keep the elephants out,” he tells Mongabay. “They can make a mess among crops.”

But he also sees the benefits to local communities of having live elephants in their area. Mokena works for the Okavango Community Trust, whose members accompany guided safari tours of the world-renowned delta. He was born in a nearby village and has represented the trust for 15 years. Elephants and lions, he says, are the two animals most tourists ask to see when they visit.

Mokena says having elephants on the concession is beneficial for the local economy. He says up to 90 percent of staff at some of the safari lodges come from local villages. It’s something that’s reflected in the big picture: safari tourism accounts for 11 percent of Botswana’s GDP, second only to mineral extraction.

“The local villages benefit from the tourism,” Mokena says, adding that it “brings work and money.”

This article by Johan Augustin was first published on Mongabay.com on 12 Mar 2019.

We invite you to share your opinion whether the culling of elephants in Botswana should be allowed? Please vote and leave your comments at the bottom of this page.

No definitely no. I wish to visit t Botswana but I would not come if I know you follow this cull though.

Botswana, I am losing faith in you. Please don’t do it.

NO NO because this will open the door to Illegal poaching as the boundaries becomes Blurred. This is what Potential Poachers and Ivory loving countries want to happen. Culling will become Poaching as is happening ing every other country . Culling is the door to decimation and must be banned! Elephants have a right to live peacefully!

THESE FILTH-BAG HUNTERS MUST BE EXTERMINATED AND DECAPITATED.LETS BAND TOGETHER AND PERFORM THIS DUTY.

No ,they should leave them alone