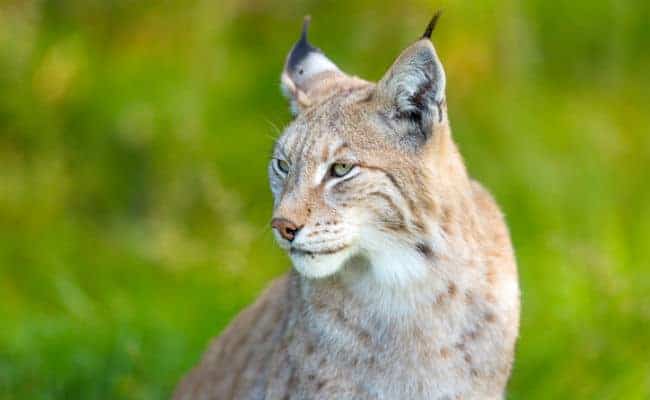 Wildlife group Lynx UK Trust has officially filed a request to allow the reintroduction of the Eurasian lynx to select areas of Northumberland. The move could represent a massive step forward in restoring some of the UK’s long-lost wild predators.

The enigmatic Eurasian lynx, a medium-sized feline known for its long-tipped ears, once roamed UK forests freely. But around 1,300 years ago, the lynx died out –largely as a result of the fur trade.

Now, wildlife groups argue that the lynx is long overdue for a return to the UK’s forests where it could serve an important function: deer control.

The British deer population has hit record highs, with numbers soaring to1.5 million deer in woodland and semi-urban areas. Many factors have spurred this population growth — including the fact that, for most of the past few centuries, deer hunting has been tightly controlled.

That’s a positive in many respects, but with the absence of large predators — like wolves, bears and the aforementioned lynx — deer populations have grown. And deer are ideally suited to the UK’s now largely protected forests, meaning they can breed mostly unchallenged. This has created ideal conditions for the animals to thrive, but it has come at a cost.

Farmers and wildlife experts alike have become increasingly concerned that the deer boom is putting intense strain on forest and semi-rural lands, leaving fewer areas for farm animals to graze undisturbed and stripping away vital habitat.

Farmers have gone so far as to call for increased deer culls — either through targeted campaigns or through expansion of limited hunting. Some increased culls have been established since 2015, but wildlife groups argue that the underlying problem can’t be solved by culls — at least, not completely.

Conservation biologists claim that only predators can truly address the deer population problem by returning much-needed balance to the food chain.

Will lynx roam the forests again?

As Care2reported back in 2015, the Lynx UK trust has carried out a careful assessment of five regions in the UK that could be ideal for lynx reintroduction. With that consultation now over, the Trust has settled on using the Kielder Forest in Northumberland,the northernmost county of England, as its test site.

Kielder Forest offers a relatively large area free of major roads — and most importantly,it has an overabundance of deer.

If the project gets the go-ahead, the Trust hopes to introduce six Eurasian lynx into the forest, carefully tracking the cats’ behavior and impact on the local deer population. And the Lynx UK Trust is confident that this test will show the merits of reintroducing the lynx.

Lynx belong here as much as hedgehogs, badgers, robins, blackbirds – they are an intrinsic part of the UK environment. There is a moral obligation. We killed every single last one of them for the fur trade, that’s a wrong we have to right.

The reintroduction of 14 lynx to Germany’s Harz mountains in 2000, proved to be a success, so encouraging precedent from other test sites exists.

Many residents of Northumberland seem on board with the plans. Given that lynx are highly solitary creatures, they are incredibly unlikely to venture close to populated areas. Nevertheless, the chance to spot a lynx in the forest could prove a substantial tourist draw — especially for an area whose tourism industry serves as a major income source.

As a result, some residents view the reintroduction effort as a neat solution to the overpopulation of deer — one that they hope can bring multiple benefits, not least of which is a boom in visitor numbers.

Nevertheless, the farming industry as a whole appears to oppose the decision.

The National Sheep Association’s Chief executive Phil Stocker is claims that this could be a dangerous move for British farming and wildlife conservation, telling the Chronicle Live:

This country is a very different place to what it was 1,300 years ago. The NSA does not believe we have enough large scale, suitable habitat to support the minimum population of 250 lynx that is needed for true genetic sustainability. Animal welfare and disease biosecurity, as well as unconsidered changes in ecology if we were to see pastoral farming decline, also present huge problems.

While farmers have been assured that the chance of livestock predation is remote — lynx will only take what is readily available, and there are so many deer that initial loss is highly unlikely — the plans mean they will be compensated for any such fatalities.

However, Stocker raises an interesting point: Initial reintroduction of the lynx might not be problematic, but what about in the long term?

Scientists monitoring lynx reintroduction explain that other colonies of reintroduced lynx will have to be supplemented because genetic diversity is crucial to keeping the population healthy. And that may mean increasing lynx numbers into the hundreds.

Will such large numbers present a problem? Perhaps, but not necessarily.

Establishing wildlife corridors between lynx populations could allow for low-impact genetic trading and would aid in tracking the animals. Supporters of the effort emphasize that no one is suggesting lynx numbers go from zero to 250 overnight. Rather, this process will bea gradual one with ample time to address any unforeseen challenges.

In short, the lynx seem to offer an attractive solution to deer overpopulation. Species reintroduction is not without sticking points, but as the oversight body Natural England now considers, this proposal many wildlife groups are excited that the UK could finally see the return of such an iconic species.

We invite you to share your opinion whether the Eurasian Lynx should be reintroduced in the UK? Please vote and leave your comments at the bottom of this page.

It is a good idea to reintroduce the Lynx, it will help restore the balance of nature. As long as humans leave them alone and don`t start killing them.

The Eurasian lynx extinction in the UK was a sad story.Many less-dramatic species also vanished from the Ilse of Britain.Reintroduction was their saving grace.The only large predator in Great Britain is the red fox (Vulpes vulpes) they hunt generally small prey.Humans have a real issue with the boosting populations of red and roe deer in the country.Lynx are natural predators of these ungulates,so the culling of deer,will be done naturally once reintroduction comes in.The Forest of Dean for instance,is perfect for the lynx.

Just wondering if they will be safe? Answer is always “no”! What hope has any predator in any country?

Judy I know that safety is a real issue but lynxes are shy and have large hunting territories.They will be fine as long as we are willing to accept reintroduction.Lynx are perfect for rewilding.