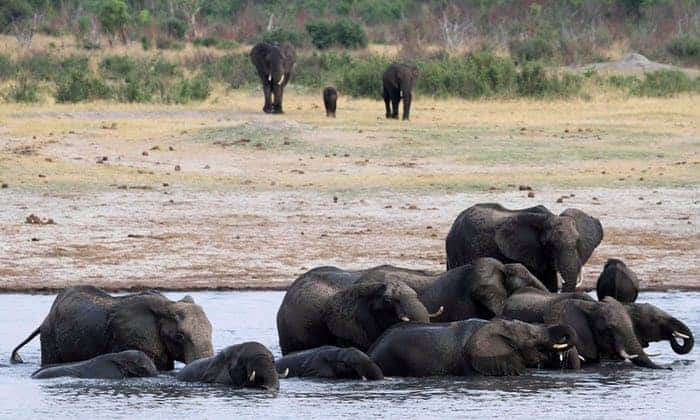 More than 30 wild elephants were being readied on Friday evening for an airlift from Zimbabwe to captivity in China, according to wildlife advocates.

The founder of Zimbabwe Conservation Task Force, Johnny Rodrigues, said on Friday that their plane was still at Victoria Falls airport because officials could not find scales big enough to weigh the animals, which were confined inside heavy crates.

But once that was accomplished, he added, “they’re gone”. Some of the elephants are reportedly as young as three years of age.

The live export of elephants is controversial, although legal. Wildlife advocates argue that elephants do not belong in captivity and the practice of wild capture disrupts the social structure of their herds.

“Everything is wrong with [elephant exports],” said Daniela Freyer of the German-based conservation group Pro Wildlife, “starting from the welfare perspective. But also the conservation aspects are really important. There is a high mortality rate during capture and in transport and in captivity. It is morally not acceptable and not sustainable.”

Dallas Zoo, which recently imported a number of wild elephants from Swaziland, says on its website that “those claims are unsubstantiated by science. Much of the information being cited is old, and doesn’t take into account the current methods of human care of elephants.”

Zimbabwe Parks and Wildlife management authority (ZimParks) announced in August that it would be capturing elephants from Hwange National Park in a conservation scheme that it said would repopulate another park in the country. But wildlife groups said at that time that they suspected the country was planning to export the elephants to China.

Zimbabwe’s environment minister, Oppah Muchinguri, recently said: “Zim must sell its elephants because not only are they a global resource but also a local one, as it [the sale] will support the livelihoods of our local communities and for future generations.”

Sharon Pincott, an elephant conservationist who monitored a clan of elephants in Hwange for 13 years, said: “What Zimbabwe is doing may be legal but it is in no way ethical, especially given all we know about elephant families today: their deep family bonds, their indisputable level of intelligence, the way they grieve.”

Pincott said she did not know if some of the elephants being sent abroad could be the ones she studied for more than a decade. She also noted that the fragility of the young elephants could not be overstated as they were being deprived of their mothers’ milk.

Patricia Awori of the African Elephant Coalition (AEC) Secretariat, a coalition of 29 countries that has proposed a ban on the export of African elephants outside their natural range, said: “The essence of being an elephant is that they live, function within and are shaped by their environment. Foraging for and consuming food, rolling in the mud, and frolicking with its siblings is an essential part of being an elephant. An elephant that ceases to be wild ceases to be.”

The elephants will most likely be sent to the Shanghai Wild Animal Park and the Yunnan Wild Animal Park, according to Chunmei Hu, currently with the advocacy group the Endangered Species Fund in China.

Hu has closely followed a previous export of wild Zimbabwe elephants to China in 2015. As of August, she said, the elephants were still in quarantine and she believes at least one of them is dead.

Other zoos in China have requested African elephants, including the North Forest Zoo in Harbin, Ordos Zoo in inner Mongolia, and Beijing Wildlife Park, she added.

Iris Ho, wildlife campaign manager at Humane Society International, said she was highly concerned over the elephant export: “The sales of baby elephants and other animals from Zimbabwe to China are possibly the worst-case scenario for wildlife caught in shady deals.”

On the demand side, Ho said, “We have a country that continues to attract international condemnation for its deplorable treatment of iconic wild animals in captivity, from Pizza the polar bear in a Guanzhou shopping mall, to elephants forced to perform or languish in captivity.”

And on the supply side, “We have a corrupt regime that disregards human rights and freedom, and that is selling its wildlife to the highest bidder with no meaningful oversight.”

Efforts to reach ZimParks for comment were not responded to. Neither was an email to the Convention on International Trade in Endangered Species authority in Beijing.

This article was first published by The Guardian on 23 Dec 2016.

We invite you to share your opinion whether the export of elephants to China should be banned? Please vote and leave your comments at the bottom of this page: