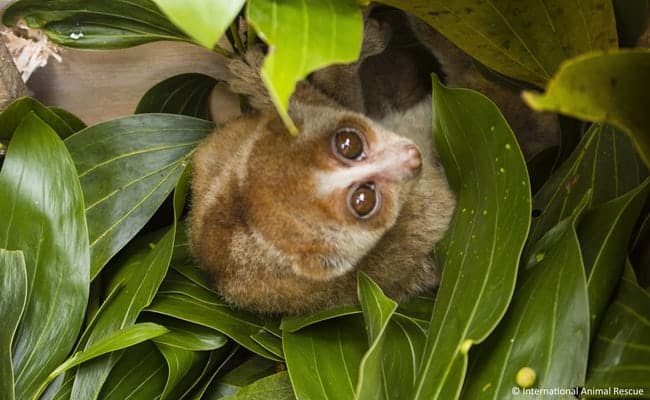 The tourism industry has taken some big steps to stop the exploitation of wild animals, but a recent rescue effort has highlighted how much more needs to be done on our part to help stop the illegal wildlife trade.

After receiving reports of 17 endangered slow lorises being kept in deplorable conditions as an attraction for visitors at a resort in West Borneo, wildlife officials and rescuers from International Animal Rescue (IAR) headed to the scene to help.

Unfortunately, there were only ten lorises when they arrived. Of those, only seven were alive, while the bodies of the three who had died had been left to rot in their enclosure.

They had been to a small area with only three trees, and despite being shy and nocturnal animals, they were subjected to spotlights at night so visitors could view them.

According to IAR, the owner had bought them from local villagers for just $7.62 USD each. Thankfully, in his absence an employee at the resort signed them over to rescuers, who quickly gathered the survivors and began the trip back to IAR’s rescue center.

All of them were in bad shape. They were stressed, dehydrated and underweight. Their teeth had all also been cut out to make them defenseless, which led to problems with their mouths and infections in their gums. One female, named Mia, was suffering from a host of health issues, and despite valiant efforts to save her, she didn’t survive.

“The environment these lorises were being kept in failed to meet their most basic needs. Slow lorises are shy nocturnal primates. They spend their days sleeping, hidden away deep in the forest, and emerge in the cool darkness of the night to hunt for food.

These captive lorises were victims of shocking cruelty and neglect. They were kept under blinding lights to make them visible to tourists and had insufficient space and vegetation to move around and find food.

Their teeth had been cut which will have affected their ability to catch and eat insects and their infected mouths must have been causing them considerable pain. No wonder they were all underweight and dehydrated.

Had our team not rescued them, I have no doubt that more of them would have died before too much longer,” said Alan Knight OBE, Chief Executive of IAR.

While they won’t be able to return to their jungle home because of the damage to their teeth, they will at least now get the care they need.

Unfortunately, cases like this highlight the need for far more to be done to protect these unique creatures, whose cuteness has led to a demand for them that’s threatening their survival in the wild and causing serious problems for those who have been taken into captivity.

According to IAR, it’s estimated that every day three slow lorises are taken from the wild. The organization’s team in Indonesia has rescued more than 500 of them from the illegal trade. Right now, the organization has 150 in its care at its Primate Rescue and Rehabilitation Center in West Java – the majority of who can’t be released because their teeth have been cut.

Hopefully this latest rescue will help raise more awareness about their plight and encourage tourists to avoid facilities that are using slow lorises, and other wild animals, as attractions.

“We would urge anyone who comes across wild animals in situations like these lorises to express their concerns about them to those responsible and also to contact a local animal welfare group so that action can be taken to help them,” added Knight.

For updates and more on how to help, visit International Animal Rescue and its Tickling is Torture campaign.

We invite you to share your opinion whether the illegal wildlife trade in slow lorises should be stopped? Please vote and leave your comments at the bottom of this page.

5 thoughts to “POLL: Should the illegal wildlife trade in slow lorises be stopped?”