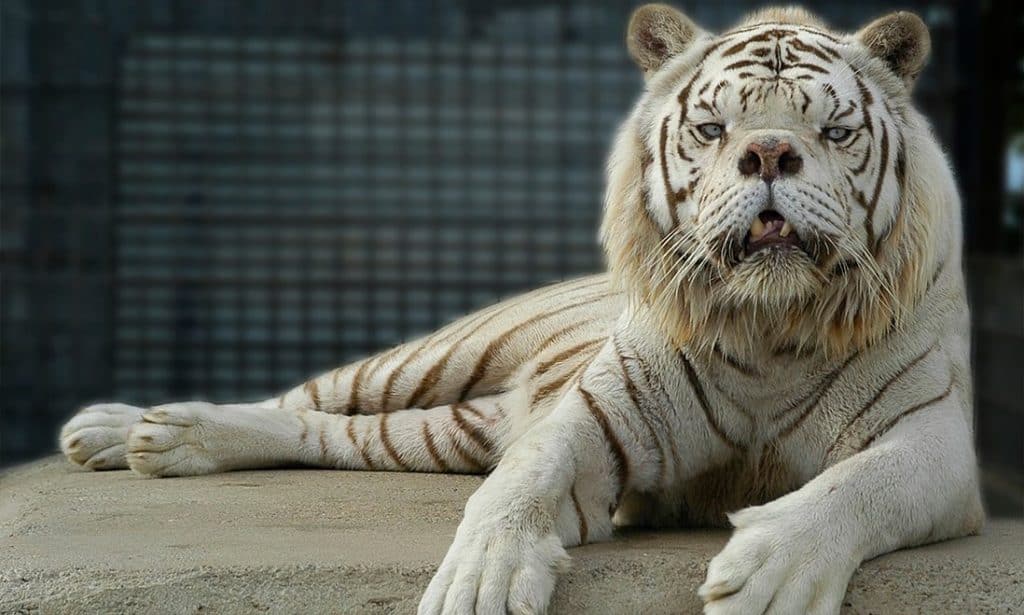 A coalition of US conservation groups has launched an attempt to outlaw the breeding of so-called frankencats, where big cats such as tigers and lions are crossed with each other to create unusual and often unhealthy specimens.

A petition filed with the US Department of Agriculture (USDA) on Friday calls for an end to the “inhumane” interbreeding of large felines, claiming that the practice clashes with federal animal welfare laws because of the increased probability of resulting health problems such as cancer, cleft palates, arthritis and depression.

Research has shown this cross-breeding can heighten the risk of various ailments. Tigons can experience dwarfism while gigantism is known to occur in ligers. Hercules, a liger who resides at the Myrtle Beach Safari wildlife reserve in South Carolina, was named the world’s largest living cat in 2014, weighing 922lb.

White tigers occur when two Bengal tigers that carry a recessive gene that influences coat colour are bred together. White Bengal tigers have also been crossed with Siberian tigers in order to create a larger animal, which can be affected by even more inherited health problems.

The offspring are prone to becoming cross-eyed, as well as facing other maladies, due to their genetic past. Scientists have found a single gene is responsible for all white tigers, with severe inbreeding occurring since white tigers were virtually wiped out in India. Almost all white tigers in the US can be traced back to an individual tiger.

These striking big cats have become popular as pets for various celebrities, such as the former basketball player Shaquille O’Neal, who owns two white tigers on a Florida farm. The magicians Siegfried and Roy have made white tigers famous as part of their act and have funded the breeding of the animals. In 2015, two white tiger cubs, called Justice and Liberty, died from kidney failure while being raised by the magicians’ not-for-profit organization.

However, most cross-bred large cats in the US are kept in private zoos, often for the amusement of passing tourists beside roads. Roadside zoos have blossomed since the 1950s, with more than 3,000 of these unaccredited facilities now dotted across the country.

“These disreputable zoos breed tigers with lions to provide a novelty for tourists in order to make money,” said Carney Anne Nasser, a campaigner at Peta, one of eight animal welfare groups behind the USDA petition. “This kind of breeding virtually guarantees health problems. There’s no conservation purpose to it and it should be banned. There is a big cat crisis in the US.”

This kind of breeding virtually guarantees health problems. There’s no conservation purpose to it; it should be banned

The USDA does not regulate the actual breeding of animals, with its oversight focused on areas such as veterinary care and the handling of animals. The conservation groups behind the petition want the agency to broaden its definition of animal welfare to include breeding that produces animals at risk of defects and illness.

It’s estimated that there are now more tigers in captivity in the US – at about 5,000 – than the worldwide wild population of the animal. Most US-based big cats are in small private zoos or housed by exotic pet owners.

The Association of Zoos & Aquariums, which accredits zoos, advises against intentional inbreeding as it is “clearly linked with various abnormal, debilitating and, at times, lethal external and internal conditions and characteristics”.

The AZA has also noted its concern that zoo visitors are often very interested in seeing the offspring of this sort of breeding, which perpetuates the practice.

“Even among today’s frequently well-informed and educated zoo visitors, the interest in seeing white tigers, white lions, white alligators, or king cheetahs continues often in preference over the ‘normal’ looking individuals of the same species,” the AZA policy position states.

“Of greater concern, in some cases, there exists the misconception that these unusual color morphs, or other phenotypic aberrations, may represent a separate endangered species in need of conservation.”

Once the USDA receives a petition to alter its rules, the regulator will assess it and, with input from a period of public comment, decide whether it has merit.

This article was first published by The Guardian on 19 May 2017. Lead Image: Kenny, an inbred white tiger. Photograph: Turpentine Creek Wildlife Refuge.

We invite you to share your opinion whether the inter-breeding of lions and tigers should be banned? Please vote and leave your comments at the bottom of this page.