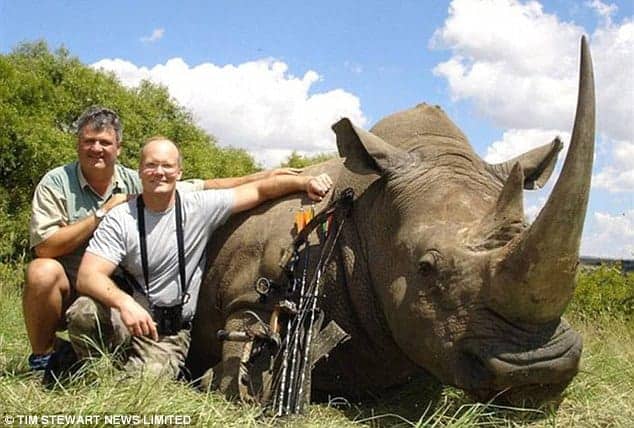 My Outdoor TV (MOTV), an online channel that debuted last weekend in the United Kingdom and is already available in the United States, may sound like it celebrates nature and the great outdoors, but that is very far from the case.

No, the programming on MOTV – which costs $9.99 a month and is being dubbed the “Netflix of the hunting world” — includes trophy hunters on African safaris, killing threatened animals like elephants and lions. The hunters use rifles as well as bows and arrows, and viewers can watch as the animals suffer horrible deaths.

Another program, according to a Times article about MOTV, shows a hunter killing a critically endangered African elephant. “There’s no other feeling in the world quite like walking up on your bull elephant,” he says.

A program called “Skull Bound” shows bow hunter Jana Waller killing animals around the world. The Times reports that in one episode, she shoots an African antelope, then waits for it to bleed to death. “It’s a good shot,” she says as the antelope takes its last breaths. “Definitely, some liver and some lungs hit.”

In this very disturbing sample that you probably don’t want to watch, hunters shoot and kill a lion.

The channel will show “ethical, fair chase hunting and as long as it’s legal it will be on there,” MOTV spokesman Simon Barr told the Times. “If you like hunting elephants, there will be legal elephant hunts, ethical elephant hunts, shown in that context.”

“Ethical elephant hunts?” It didn’t take long at all for outrage over MOTV to spread across the UK.

“We think Mr. Kroenke is out of touch with the way most people are thinking,” Chris Pitt, with the nonprofit League Against Cruel Sports, told BBC News. “We’re not in the old days when hunters went out to bag an elephant and put its head on the wall.”

The killing of Cecil the lion in 2015 – as well as his son, Xanda, last month – has shined an international spotlight on the cruelty of the “sport” of trophy hunting. Yet these hunters like to insist that what they’re doing is actually beneficial to animals and impoverished communities. They won’t admit they’re killing animals primarily for the thrill of it.

Here’s a good example: MOTV spokesman Barr told BBC News, “Hunting adds very good dollars into conservation and it is an absolute driver for keeping some of these endangered species alive, and that’s very, very important.”

“Most people won’t agree that trophy hunting is in any way ethical, and studies have debunked claims that most of the blood money goes towards supporting conservation,” Philippa King of League Against Cruel Sports told the Times. “I’m not sure in what way an idiot with a gun against an elephant is a fair chase.”

Kroenke is worth an estimated $7.5 billion, according to Forbes. Just imagine if he put some of that fortune to use helping endangered animals instead of promoting and making even more money off of sick people who want to kill them or watch them being killed.

We invite you to share your opinion whether the MOTV trophy hunting channel should be closed down? Please vote and leave your comments at the bottom of this page.