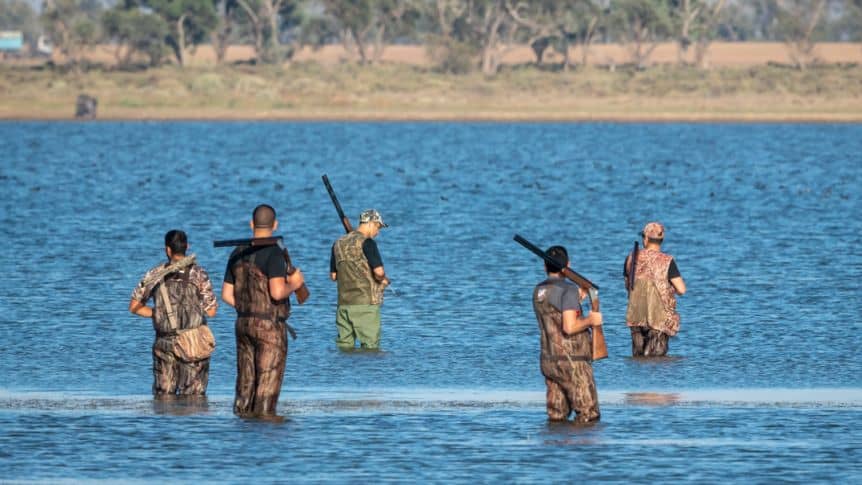 A study of Victorian duck shooters has found that only one in five were able to correctly answer questions about identifying protected bird species, raising pressure on Victorian Premier Daniel Andrews to ban duck hunting ahead of the 2021 season.

Last year, the season was shortened from May to June after dry conditions and bushfires reduced bird populations. The season was then cut even shorter due to the coronavirus pandemic, as residents were told to stay at home. In total, around 60,400 ducks were killed, roughly a quarter of the number shot in 2019.

A ban was placed on killing the Blue-winged Shoveler due to low numbers. Late last year, the GMA released the results of a survey that quizzed roughly 5,300 hunters in the state about hunting rules.

Duck shooters performed the worst, with just 20 per cent able to correctly answer questions about bird identification. Campaigners say the practice should be outlawed, especially in light of those findings.

“It tells both the Government and the Victorian public that duck shooters cannot even do the single basic thing that they claim they are out there to do,” said Animal Justice Party MP Andy Meddick.

The GMA said that all shooters must score 85 per cent or higher to pass the Waterfowl Identification Test before they are allowed to hunt.

The high failure rate for the December survey would inform future education materials, it said.

In recent years, the GMA has been repeatedly accused of failing to investigate and enforce duck shooting breaches.

In 2018, an internal report found it was “widely perceived” by both shooters and its own staff “to be unable to police [hunting laws] properly or to punish those who break them”.

At the time, the GMA said it took the findings very seriously.

There are a number of Labor MPs, including senior Cabinet Ministers, who privately want duck shooting for sport banned.

There are also some MPs agitating for a change of Government policy, a position at odds with the party’s leadership.

At Labor’s 2019 state conference, MPs Lizzie Blandthorn and Steve McGhie co-sponsored a successful motion calling for a review of the sport.

“Unfortunately, that review has not been conducted, maybe due to the coronavirus pandemic,” said Mr McGhie.

“We are fast approaching another duck hunting season and I think that review should be conducted ASAP.”

Senior Labor sources say one of the biggest obstacles to change is Mr Andrews, who continues to back duck shooting.

The Coalition also backs the status quo, but there are also Liberal MPs against the practice.

Brighton MP James Newbury used his maiden speech in 2018 to call for an end to duck hunting.

He said if the Government allowed the season to go ahead this year it would be the same as “handing out free cartridges”.

The GMA has also been accused of using outdated data to justify its decision to hold a truncated 2020 duck shooting season.

The recommendation for a season uses data from the Aerial Survey of Wetland Birds in Eastern Australia (EAWS), jointly conducted by the University of NSW and the NSW Government’s Centre for Ecosystem Science.

“As many game duck species are highly mobile and can move across state borders, data on game duck abundance and distribution is considered for eastern Australia, not just Victoria.”

But the Animal Justice Party says the advice looked at the national increase in bird population rather than the decrease in Victoria.

“It’s both mine and the GMA’s expectation that hunters abide by the conditions attached to their license, and to act safely and responsibly at all times when hunting,” she said.

Duck hunting is banned in NSW, Queensland and Western Australia.

This article was first published by ABC.net.au on 20 January 2021. Lead Image: The 2020 duck season was cut short by low bird numbers and the coronavirus pandemic.(Supplied: Doug Gimesy).

We invite you to share your opinion whether the practice of duck shooting for sport should be banned? Please vote and leave your comments at the bottom of this page.