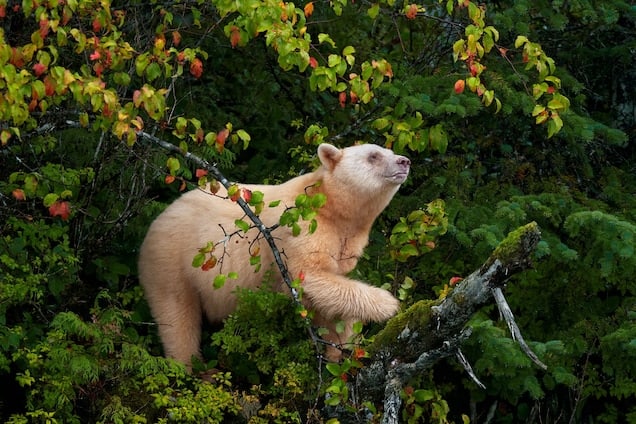 KLEMTU, GREAT BEAR RAINFOREST, BRITISH COLUMBIA – There are stories about the white bears that hide in the deep forest of British Columbia’s coast. Old stories, handed down from one generation to the next for thousands of years, since the last Ice Age gripped the world, and glaciers licked the edge of the rain forest.

One tale, told by the Kitasoo/Xai’Xais Nation, says that as the sheets of ice began to retreat, Raven—the creator of all things—made the animal known as the spirit bear to remind him of the ice and snow.

It’s a story that speaks not only to First Nations’ connection with wildlife but also to their deep roots in the Great Bear Rainforest, an area the size of Switzerland that’s home to some 20,000 First Nations people.

Yet in the 1980s when Doug Neasloss, the elected chief of the Kitasoo/Xai’Xais, was growing up, he never heard the origin story of the spirit bear. In fact he never heard of spirit bears at all because for decades the stories about these white-coated relatives of black bears were kept secret. Elders feared that if word of their existence spread, spirit bears—like black and grizzly bears—would be pursued and killed by fur trappers or trophy hunters.

So in the late 1990s when Neasloss was starting to work as a wildlife guide and his boss told him to go out and look for a white bear, he was skeptical. You guys are out to lunch, he remembers thinking—there’s no such thing as a white bear.

But Neasloss dutifully ventured into the bush. He was just unzipping his trousers to relieve himself when a ghostly bear padded into the forest and lay down on a bed of moss 30 feet in front of him. The bear began gnawing on a salmon it had caught in a nearby stream, unconcerned by Neasloss’s presence. A ray of sun momentarily broke through the clouds. “It was magical,” he says.

Spirit bears, also known as Kermode bears, are among the world’s rarest ursines, found only in the remote archipelago of British Columbia’s central coast. They’re a subspecies of the black bear, born white when two dark-furred parents carry an obscure genetic mutation. The British Columbian government estimates there are 400 spirit bears in the province, and hunting them is illegal.

It wouldn’t be much of an exaggeration to say that Neasloss’s encounter with that bear helped redirect the fate of his community. At the time his hometown of Klemtu was struggling with about 80 percent unemployment and a host of social ills. The tiny town—on an island only accessible by plane or boat—was still struggling to recover from the loss of its fish cannery decades before, and logging companies were pressuring local officials to cut down the surrounding rain forest to create jobs.

Neasloss had another idea. He believed the forest was worth more intact, and the bears it sheltered—grizzly, black, and Kermode—were worth more to the Kitasoo/Xai’Xais alive than killed by trophy hunters. If Klemtu capitalized on tourists’ fondness for bears and invested in the ecotourism beginning to take hold in the region, perhaps the village could bounce back without sacrificing its natural resources. It was worth a shot.

A BEAR IN THE BUSH IS WORTH TWO IN THE HAND

In 1999 Neasloss helped launch the Spirit Bear Lodge from a little red-roofed float house anchored at Klemtu’s docks. Today a luxurious new lodge accommodates visitors from around the world, most of whom come to tour the nearby islands in hope of spotting and photographing bears. All profits go to the tribe. Ecotourism is Klemtu’s second-largest industry, and unemployment has fallen to 10 percent.

In part because of this growing dependence on ecotourism, and because of their long-standing connection to the land, Kitasoo/Xai’Xais was one of 27 First Nations that negotiated with the Canadian government to permanently conserve 85 percent of the Great Bear Rainforest. Finalized in 2016, the Great Bear legislation was a success for both indigenous activists and international environmental groups.

But in Neasloss’s view it had one gaping hole: It failed to end trophy hunting for grizzly and black bears.

The Kitasoo/Xai’Xais and other Coastal First Nations have never signed treaties giving up their land rights, and in 2012 they decided to ban trophy hunting in their traditional territories. The British Columbian government, however, exerts legal jurisdiction over much of the Great Bear Rainforest, and despite the nations’ ban, the provincial government has continued to issue tags and licenses to kill grizzly and black bears for their heads or fur. Many indigenous people consider this an affront to their sovereignty and values.

“Our people do not believe in killing an animal unless it is taken for food,” says MaryAnn Enevoldsen, elected chief of the Homalco Nation, which runs a grizzly-viewing area about 200 miles south of Klemtu. “We can show thousands of people the bears in their natural habitat without harming or stressing them out. On the other hand, the ‘pleasure’ of killing a bear only happens once and gratifies a few individuals.”

A study by the Center for Responsible Travel found that in 2012 visitors to the Great Bear Rainforest spent 12 times as much money on bear watching as on trophy hunting—and Doug Neasloss’ experience suggests that the two activities cannot co-exist. Several years ago, he was leading a group of tourists among the maze of islands near Klemtu when he glimpsed something dark and motionless in a river estuary. He thought it might be a dead seal. As he nudged the boat closer for a look, the object resolved into the headless carcass of a grizzly. His clients were horrified. Neasloss says hunters make bears more skittish, which means tourists are less likely to see them.

According to the British Columbian Ministry of Forests, Lands, Natural Resource Operations, and Rural Development, some 250 of the province’s 15,000 grizzlies are killed by hunters each year, nine in the Great Bear Rainforest. Hunting the province’s 100,000 black bears is also allowed, but there’s no annual quota system. Government officials have long claimed that the number of bears killed is sustainable, but some First Nations’ biologists question the government’s science.

Among them is William Housty, a biologist with the Heiltsuk Nation. Housty says that while government numbers are rough estimates extrapolated from a few overflights, his own department led a six-year, boots-on-the-ground mapping project using grizzly DNA that found wide variation in bear populations, especially as salmon runs have declined in recent years. (A spokeswoman for the provincial government agrees that DNA-based inventory is the “gold standard” and says her department welcomes peer-reviewed science from First Nations to augment its own estimates.)

For one thing there are still too few wildlife officers to enforce hunting regulations, which means much of the work will continue to fall to the Coastal Guardian Watchmen, a network of First Nations people who monitor, patrol, and enforce indigenous laws in parts of the Great Bear Rainforest that are too remote for federal or provincial officers to reach regularly. The Kitasoo/Xai’Xais are ramping up their Coastal Guardian Watchmen presence to deter poachers in the waning days of the grizzly hunt, but their efforts alone cost some $210,000 a year—a fraction of the funds activists say the network needs.

In addition, as long as the British Columbian government continues to allow trophy hunting for black bears, Neasloss’s work isn’t done. That’s because black bears here are the progenitors of the spirit bears.

“Every time you issue a tag for someone to shoot a black bear, it could be carrying the recessive gene that produces the spirit bear,” he says. He’s currently meeting with government officials and working with other First Nations to convince the province also to ban trophy hunting for black bears in the Great Bear Rainforest.

SAVING THEIR CULTURE BY SAVING BEARS

For many First Nations people, ending trophy hunting isn’t just about saving wildlife or benefiting from the money bear-viewing brings to their communities. It’s also about cultural survival. Like many indigenous people, First Nations in the Great Bear Rainforest were marginalized for much of the past two centuries.

Traditional religious ceremonies called potlatches were banned by the Canadian government until the 1950s, and sacred regalia was burned as punishment for holding them. Thousands of children were sent to live at government-run “residential” schools, where many were physically abused and forced to abandon their culture. Languages, food, customs, stories, and rituals were all but lost.

Today, First Nations up and down the coast are reclaiming their culture, and bear-based ecotourism is a part of that. Many tribes are rebuilding the “big houses” where potlatches and other ceremonies are held, sometimes with money earned from tourist operations.

Coastal Guardian Watchmen are reconnecting with their traditional lands as they patrol for illegal hunting. And elders no longer fearful of poaching are starting to share the sacred stories about bears they’d kept silent for so long.

Just down a gravel road from the Spirit Bear Lodge is Klemtu’s big house, a massive cedar building constructed in 2001. It’s perched at the edge of the sea, surrounded by mist-shrouded cedars and spruce trees, with an opening in the roof to let out wood smoke. Inside, 24-year-old Barry Edgar is giving a tour.

He talks about a new online database that’s preserving digital recordings of traditional stories and about the new generation of children who will grow up hearing ancient tales about Kitasoo/Xai’Xais’ unique relationship with bears, told beneath the carved totem poles of the big house.

“Culture is like a flower,” Edgar explains as visitors snapped photos of the intricate carvings. “It needs to be in the sun to thrive. Tourism helped us survive because it forced us to remember things.”

This article was first published by National Geographic on 26 Oct 2017. Lead Image: A Kermode bear, also known as a spirit bear, climbs a crab apple tree to grab its fruit in the Great Bear Rainforest, in British Columbia. These rare white bears are sacred to First Nations people. Photograph by Paul Nicklen, National Geographic Creative.

We invite you to share your opinion whether the Rare Spirit Bear should be protected from hunters? Please vote and leave your comments at the bottom of this page.