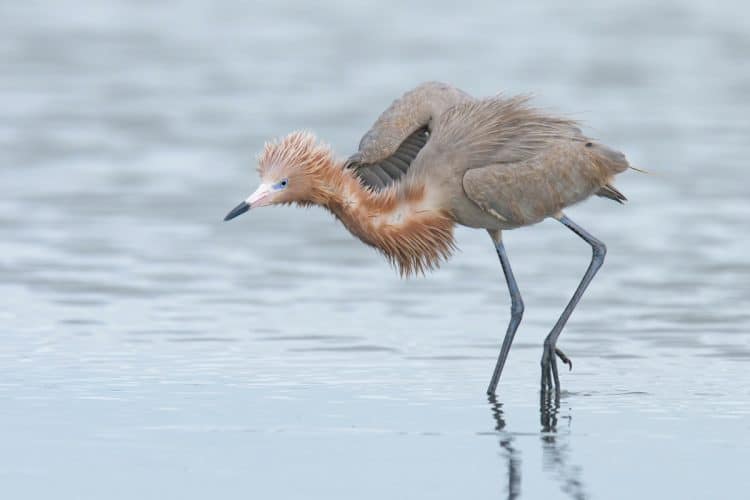 Hurricane season is again upon us, with storms threatening communities, homes, and wildlife habitat in their path. As communities recover in the wake of these storms and floods, we must implement common-sense policies to help rebuild a more nature-based, resilient landscape to better protect people and wildlife like the reddish egret.

The good news is, we can protect coastal habitats and make sure affected families are helped, by reauthorizing and reforming the National Flood Insurance Program. Congress can pass reforms to improve this critical program, but they must act before it expires on July 31st.

Though the 2018 hurricane season has just begun, many communities and wildlife are still recovering from Hurricanes Harvey, Maria, and Irma. The reddish egret, a bird that feeds and nests in natural areas along the coast of Florida, is one of many species that relies on these fragile coastal floodplains impacted by last year’s destructive storms. The Florida population is threatened by several factors, including loss of crucial habitat from dredge and fill activities.

Use your voice to speak up for wildlife: Urge Congress to reauthorize and reform the National Flood Insurance Program to better protect and prepare people and wildlife in the face of increasing risks from flooding and other natural disasters.

Our nation’s natural features like floodplains, wetlands, rivers, and coasts provide vital wildlife habitat and support an incredibly diverse array of fish and wildlife. Healthy natural infrastructure also often serves as the first line of defense against natural disasters – protecting communities and properties by acting as a sponge during floods, storing water in times of drought, and reducing the impact of severe storms.

Broken Federal Policies Can Be Fixed

Unfortunately, decades of federal policies have led to increased development and alteration of these natural defenses, reducing their ability to protect communities and wildlife from storms that are becoming increasingly severe.

One of the primary culprits is the National Flood Insurance Program (NFIP). NFIP was originally intended to reduce the amount of development in floodplains and to limit people’s exposure to flooding, but the exact opposite has happened. The program instead subsidizes and encourages people to build homes in ecologically sensitive places where flooding is likely, and does not effectively model or communicate risk, giving homeowners a false sense of security – all at the expense of the American taxpayer.

The good news is, Congress has the power to fix this. In order to address these shortcomings, NFIP must be reauthorized and improved to include meaningful reforms that will better prepare and protect people and wildlife in the face of increasing risks from flooding and other natural disasters.

The National Flood Insurance Program must be reauthorized and improved to include the below reforms:

These commonsense reforms will not only save taxpayer money but also benefit wildlife and our outdoor economy. Healthy wetlands and floodplains are crucial to the survival of many threatened and endangered species, and provide areas for people to hunt, fish, and enjoy the outdoors.

Nearly half of all North American bird species rely on wetlands and 90% of fish caught by America’s recreational anglers are wetland dependent, as are hundreds of species of birds, waterfowl, and wildlife.

Tell Congress not to waste this extraordinary chance to protect our wildlife, outdoor heritage, communities, and properties against future natural disasters by reauthorizing and reforming NFIP by the end of July.

Congress must encourage nature-based, community-wide mitigation strategies to help communities be more resilient and prepare for future storms and floods before they actually happen.

This article was first published by National Wildlife Federation on 15 Jun 2018.

We invite you to share your opinion whether the Reddish Egret’s habitat should be protected? Please vote and leave your comments at the bottom of this page.