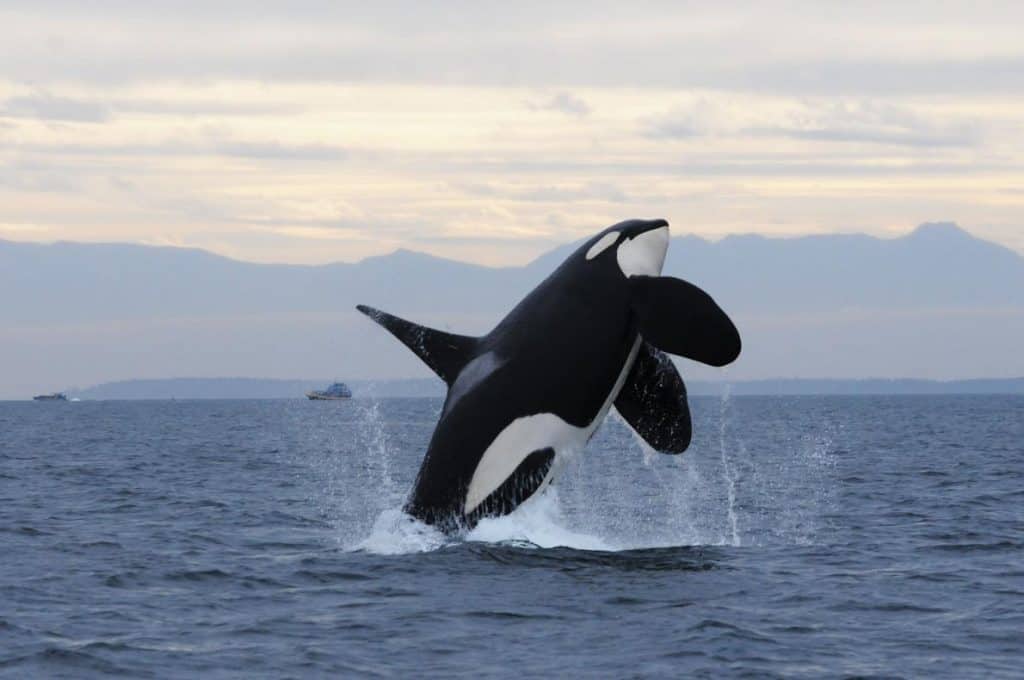 They bounced around the coast in a 22-foot Zodiac, a team of federal scientists with a dart rifle trying to nail the dorsal fin on a killer whale. The seas had been calm when they came across the pod of orcas along the Pacific Ocean near the U.S. border with Canada. But then the winds exploded and the waters turned rough, and the satellite tag and dart they fired missed the mark and smacked the water.

It was February 2016, and the scientists with the National Oceanic and Atmospheric Administration had been trying to attach tiny satellite transmitters to the endangered cetaceans to track where they go in winter, to help see why their populations are so depressed. So the researchers retrieved the dart, reloaded the rifle, and took another shot, this time hitting the animal, a healthy-looking 20-year-old male known as L95.

The darting seemed “routine in all regards,” a report would later state, until the orca wound up dead and that dart became the prime suspect. On Wednesday, an expert panel of scientists agreed that efforts to attach the satellite tag to L95 likely paved the way for a rare fungal infection that killed the endangered mammal, leaving only 82 orcas left in that population.

The accident and findings left whale scientists reeling. NOAA is “deeply dismayed that one of their tags may have had something to do with the death of this whale,” said Richard Merrick, the agency’s chief scientist, himself a former whale researcher.

“Everybody is devastated by this—nobody more so than me,” said Brad Hanson, another NOAA whale expert who helped start the orca satellite tagging operation a decade ago and now oversees the program.

But it also raised new questions: Was the death a collision of unfortunate circumstances that are not likely to be repeated? Or does a common tool intrinsic to marine research around the globe—satellite tagging—pose more risks to large marine mammals than once thought?

For now, NOAA is suspending tagging of endangered orcas and will review whether less invasive tracking methods are necessary. It is also planning a special workshop for the 88-country International Whaling Commission to discuss tagging worldwide.

Satellite tagging “is becoming more widespread, becoming commercially available to scientists all over the world, but the level of experience and training people have around the world varies,” said Alex Zerbini, a NOAA scientist who has studied tagging’s impact on whales. “We need to be very careful. We need to take every precaution.”

In recent decades, as technology has allowed transmitters to get smaller, their use in wildlife research has exploded. They offer scientists rare glimpses of animal behavior when creatures are too far afield to otherwise see or track, providing immeasurable data that can dramatically help conservation efforts. But there’s often no way to attach them without being at least mildly invasive.

The type of tag Hanson’s team attached to L95 had been used more than 530 times on 19 species, including pilot whales, grays, fins, humpbacks, beaked whales, and 56 killer whales. The transmitter is no bigger than a nine-volt battery and is taped to a pair of small titanium darts that are fired from a CO2-powered air rifle. The darts are supposed to implant in the dorsal fin and slowly work their way out over weeks or months, providing a brief window of information on a whale’s whereabouts. The marksman-scientist who pulled the trigger was experienced.

But what appears to have happened, according to an incident report and internal review, is a small but consequential misstep in procedure. After the dart was retrieved from the water, scientists wrestling with the wind and the waves sterilized it with alcohol but neglected to further disinfect it with bleach before taking the second shot.

When researchers spotted L95 two days later, near the mouth of the Columbia River, the killer whale’s ribs were showing, a sign of emaciation not altogether uncommon. Unlike more transient orcas, the three pods of southern resident killer whales that make their summer homes in Washington State’s Puget Sound and Canada’s Strait of Georgia don’t eat seals or other marine mammals; their diet consists primarily of salmon, populations of which have been dwindling. The animals also are loaded with toxins, including polychlorinated biphenyls (PCBs), that have worked their way up the food chain. And L95, for a male in his community, was already nearing the median age of death.

What all that suggests is that L95’s immune system may have been compromised already. Scientists lost track of the animal for good a few days later, until it washed up dead in Esperanza Inlet near the west coast of Canada’s Vancouver Island on March 30.

A necropsy by British Columbia pathologist Stephen Raverty showed that fungi that may have originated in the surface film of the water, or perhaps on L95’s skin, appeared to have gotten into the animal’s blood vessels, eventually making it to the lungs. Concentrations of the fungi were largest near the entry point of the dart, where pieces had broken off in the fin. “That was our biggest clue,” Raverty said.

“This infection may have been introduced at the tag wound,” said NOAA’s Merrick.

While the body was too decomposed to say for certain, Raverty’s conclusion was that the infection, aided by an already weakened animal, most likely lead to death, Raverty said.

That angered whale-protection activists who called the tagging program barbaric and defective, suggesting scientists should turn to underwater acoustic monitoring—which is used in Canada to track orcas—or some other method.

NOAA scientists acknowledged the error, but said tagging already has brought them valuable insight, allowing scientists to follow them more frequently in winter and even get prey and fecal samples. That ultimately may lead regulators to expand habitat protections for the endangered animals as far south as northern California.

“It has been a quantum leap for us,” Hanson said. “We were all surprised by how much time they were spending down there. That’s information we got from satellite tags.”

The question now is whether, or at least how, tagging should continue. NOAA already is considering adding new restrictions on future tagging of other whales and dolphins, not just orcas.

To Tag or Not?

But how dangerous is the process generally? The risks seem extremely low, but scientists concede there’s much they don’t know.

“I’m not sure I can comment with too much authority about how this situation will be received and interpreted,” said John Ford, a whale biologist who oversees the marine mammal section of Fisheries and Oceans Canada’s Pacific Biological Station. His teams use the same tags on fin whales and gray whales and usesmaller puncturing devices to get biopsy samples of whales. “But we will be looking at our whole program.”

Multiyear studies tracking tagged whales in Hawaii and the Gulf of Maine suggest the process isn’t particularly dangerous. Tagging sometimes causes extremely minor swelling or scarring. A more invasive type of tag used on endangered North Atlantic right whales has been known to cause infection, “but for all species we looked at there is no evidence of increased mortality,” Zerbini said.

Still, Zerbini, Ford, and other experts said that L95’s death highlights how little scientists know about many whale species, and how difficult it is to track risk in a marine world that is in constant flux.

For example, of the more than 250 northern and southern resident killer whales in the Pacific Northwest known to have died between 1974 and 2008, no more than 20 percent of the bodies were even recovered for scientists to try and find a cause of death.

In addition, if a dart could help spread a fungus that may be present on skin or in the water, would sterilizing the dart have been enough to prevent it? These are animals that regularly bite and scratch each other, providing ample opportunity already for skin- or waterborne illness to reach the blood stream.

Researchers also can’t say with any certainty whether the type of fungus that ultimately killed L95 is showing up now more frequently in marine waters, or just happened to be present on that particular animal. But they did notice recently another fungus normally associated with tropical trees was killing porpoises in British Columbia. Do the risks associated with tagging change as water temperatures change, potentially altering the environment?

“This fungus that affected L95 was not something we had recognized was out there that killer whales had succumbed to, at least in the wild,” Hanson said. “It certainly gives us a lot of pause. This is not a static environment relative to pathogens.”

For now the expert panel that reviewed L95’s death is recommending scientists develop new protocols, such as making better determinations before identifying an animal for tagging about whether or not it’s in ill health and more susceptible to disease. But researchers are also quick to point out that the dangers must be weighed against the incalculable information that can be gleaned from satellite tags, which, in turn may help restore many troubled whale populations.

The IWC workshops and more formal recommendations for orcas aren’t expected until sometime next year.

This article was first published by National Geographic on 06 Oct 2016.

We invite you to share your opinion whether the tagging of orcas should be stopped? Please vote and leave your comments at the bottom of this page:

Here we’re seeing some differing implicit values and argument from these. First, for those who believe that “worldwide” is meaningful, the Southern Residents are an unique population. Further, ALL life consists of individuals. L95 had an individual value to himself (dorsal fin is male), and to his relatives, an irreplaceable value equal to your own or you child’s;do NOT forget this. Any other position on this is so profoundly psychopathic that those who argue for imposing “information” over your or your child’s life as greater value are flawed in sucdh an extreme way that you are a danger to any… Read more »

Our oceans are a valuable asset to every living being on this planet, as are the animals that call it home. I don’t think it’s hard to see why our oceans are not flourishing, why coral is dying at an alarming rate, why whale populations are deteriorating. Science doesn’t need too have trackers on whales to discover the answer to this ” mysterious” question. The answer is plainly in front of mankind and it’s Man. We destroy our oceans every second of every day by polluting them with medical waste, waste from ships, oil, plastic, nets the animals become entangled… Read more »

Given that the whole globe is affected, almost always adversely, in minutest detail by man’s activities, we should welcome the small amount of money that is spent on research to improve the survival chances of any species. We can’t conserve and protect something if we don’t know how many there are, what they do and need, and where they do it. Tagging of many species is opening our eye to masses of important data, generally without impact. Occasionally, something goes wrong, as apparently in this case. The scientists involved will learn from this and decide how to proceed. For people… Read more »

What a tragic loss to the Southern Resident population. Why do we always interfere in the name of science, why can we not simply observe!