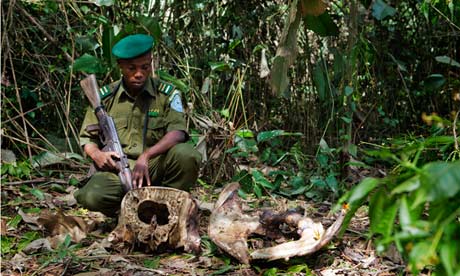 The Obama administration said on Monday it would destroy all 6m tons of its stocks of seized ivory – potentially millions in contraband – stepping up efforts to crush an illegal trade that has brought wild elephants to the brink of extinction.

The ivory destruction, announced at a White House event addressed by Hillary and Chelsea Clinton, was part of a broader effort by the administration on Monday to elevate wildlife trafficking from narrow conservation interest to urgent national security concern.

Destroying the ivory would signal that Obama was committed to stopping illegal trafficking in wildlife that has devastated species such as elephants and rhinos, and is a growing security threat, officials told the audience.

“Rising demand for ivory is fuelling a renewed and horrific slaughter of elephants in Africa, threatening remaining populations across the continent,” the interior secretary, Sally Jewell, said. “We will continue to work aggressively … to disrupt and prosecute criminals who traffic in ivory, and we encourage other nations to join us in that effort.”

Jewell also announced a new advisory council, made up of former administration officials, conservation and business leaders, to help guide the crackdown on the criminal poaching syndicates.

Obama has given growing prominence to the dangers posed by wildlife trafficking over the last year amid an explosion of the illegal trade.

Jewell said wildlife trafficking had doubled over the past five years into a global trade worth $10bn. Poaching of elephants had risen by a factor of eight in Tanzania. Killing of rhinos for their horns had gone up by a factor of 50, Jewell said.

As many as 35,000 African elephants were killed for their tusks last year. That amounted to 96 elephant killed every day, Clinton said.

“At this rate, African forest elephants will be extinct within 10 years,” said Clinton.

The profits from the illegal ivory trade were also fuelling extremist groups, including affiliates of al-Qaida in Somalia, she said.

A zero-tolerance strategy was the only way to stop wildlife trafficking, Clinton said.

“You can’t be a little bit OK with buying ivory goods, because that opens the floodgates. Therefore we are doing everything we can to stop the trafficking, stop the demand and stop the killing,” Clinton said.

Most of the demand for trafficked ivory was from Asia, but there are also American buyers. The owners of two Manhattan jewellery shops were convicted last year of selling ivory trinkets.

A number of other countries – including the Philippines – have also destroyed their stocks of seized ivory.

The stockpiles of contraband ivory were seen as a “time bomb” by conservation groups, creating confusion about governments’ seriousness to ban the ivory trade, and keeping prices high for trafficked goods.

Officials said the seized US ivory included raw tusks and carved ivory intercepted by the authorities over the past 25 years.

The administration was also thinking of introducing harsher penalties for wildlife trafficking.

“I think the penalties are not significant enough for wildlife trafficking,” said David Hayes, a former interior official who was named to the advisory council on Monday.

“We are not creating the kind of disincentive for wildlife trafficking that this problem deserves.”

We invite you to vote FOR or AGAINST the destruction of contraband ivory stockpiles. Please vote and also leave your comments at the bottom of this page.

Save the Elephants: STOP BLOODY IVORY

The editorial content of this article was written by Suzanne Goldenberg for the Guardian.