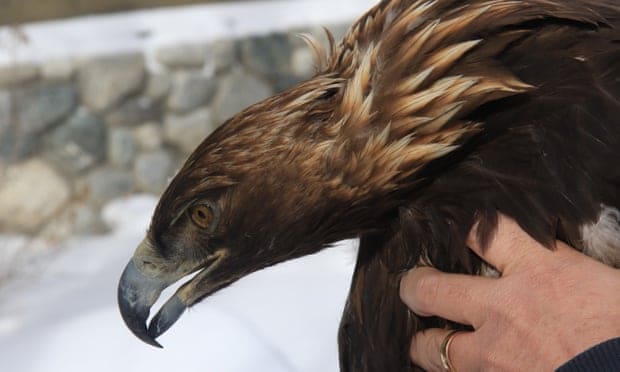 The pioneering golden eagle took to the skies above Yellowstone national park in the fall and flew north, to areas where humans were hunting game. A few months later it returned to the park and was found on the ground, dead.

Scientists performing a necropsy on the creature, the first to be tagged with a radio transmitter in the park, made an unhappy discovery: it had been poisoned by lead. They are now raising concerns over whether US national parks are as safe for wildlife as they seem.

“This bird had a substantial amount of lead put into its system in a very quick way,” said Todd Katzner, a research wildlife biologist with the US Geological Survey. “You don’t get that from breathing lead. It ingested something.”

The bird probably ingested lead ammunition fragments from big game carcasses. Lead bullets have been a source of controversy in the US hunting community for years.

Conservationists argue for the use of alternatives such as copper bullets. Shooting sports advocates say non-lead ammunition is costly and that lead has been used for hundreds of years.

The topic has also become a flash point in national politics. In early 2017, the day before former president Barack Obama left office, his administration signed an order phasing out the use of lead ammunition and fishing tackle on most federal lands managed by the US Fish and Wildlife Service.

The ban was overturned less than two months later by the former interior secretary Ryan Zinke.

It is the third time an eagle trapped for research in the northern Yellowstone region has died of lead poisoning in the last eight years.

“We know that lead poisoning is a substantial threat to scavenging birds of prey globally,” said Katzner, a research wildlife biologist with the US Geological Survey. “And we now know the threat is extended to birds that are in protected areas such as Yellowstone.”

Mark Oliva, public affairs manager for the National Shooting Sports Foundation, said that in the face of windfarms and loss of habitat, lead ammunition is just not that big of a threat.

“Hunters can also bury gut piles if they are afraid it will be a threat to the environment,” he said.

In Yellowstone, the golden eagle population is stable with large numbers particularly in the northern regions of the park. But reproduction is exceptionally poor, said Doug Smith, a senior wildlife biologist in Yellowstone.

In a first-of-its-kind study in the park, Smith and a graduate student in Montana placed a radio transmitter on one golden eagle in August and five more in early 2019 to figure out why.

Smith cannot say if lead poisoning from ammunition is an overall threat to Yellowstone’s golden eagle population or the cause of low reproduction. The study is still in its infancy.

But he wanted the public to know a prized species living in a protected area like Yellowstone could die from human activity outside the park’s boundaries.

“Is Yellowstone as protected as we once thought?”

This article was first published by The Guardian on 16 Apr 2019.

We invite you to share your opinion whether the use of lead ammunition and fishing tackle should be phased out? Please vote and leave your comments at the bottom of this page.

Hunting and fishing should be phased out too

Why are we even having this conversation. Lead is toxic. Full Stop. It should not be being used in anything which is likely to cause contamination of food or water.