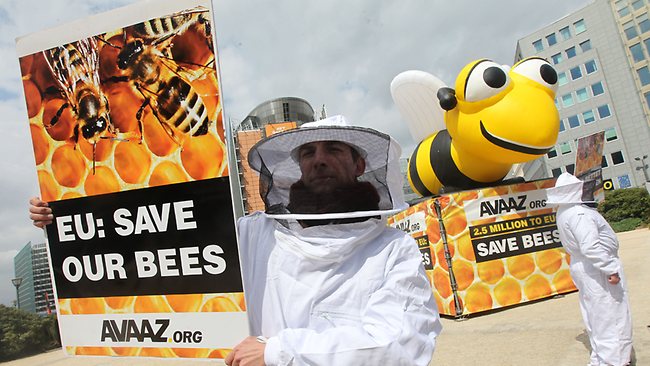 The disappearance of honey bees in the United States is a phenomenon that has many people asking questions. What exactly is going on? This question has been answered by multiple studies that have shed light on the harmful effect pesticides are having on honey bees. More research is showing that bees exposed to common agricultural chemicals while pollinating US crops are less likely to resist a parasitic infection. Honey bees are more likely to become a victim of the lethal Nosema ceranae parasite, which ultimately leads to death.

Scientists from the US Department of Agriculture as well as the University of Maryland published a study this past week that linked chemicals, including fungicides, to the large scale die-off of bees that has recently plagued the planet, you can read that study here. It’s not just the United States, Elmwood Canada also recently reported a discovery of over  30 million dead bees. The massive bee deaths in Elmwood came shortly after approximately 50 thousand bees were found dead in an Oregon parking lot. If we look overseas, the United Kingdom recently recorded its largest ever honey bee loss in history.

In the United Stats alone, the honey bee population declined by approximately 30 percent, with some beekeepers reporting losses up to 90 and 100 percent. More than 100 US crops rely on honey bees to pollinate them. The study determined that fields ranging from Maine to Delaware contained nine different agricultural chemicals. These included fungicides, herbicides, and insecticides. In some cases they even recorded samples of 21 different agricultural chemicals.

Bees are declining at an extreme rate, the human race is at a critical point and we must find alternative ways to cultivate our crops. There are a number of factors that are contributing to bee losses all over the planet. These include climate change and habitat destruction to name only a couple. It is clear that the effect of agricultural chemicals is also quite large. The European Union recently recognized this problem, and quickly put a ban on the pesticides linked to massive bee deaths, while the EPA in the US approved them.

The link between pesticides and bee deaths cannot be disregarded. It has been published in a number of peer-reviewed journals that show how widely used pesticides have a very damaging effect on bees. A paper published in the journal Nature shows how bees are twice as likely to die when exposed to pesticides; two-thirds of the bees are lost when exposed compared to a third when not exposed. The exposed bees are also half as successful in gathering food. The exotoxicology tests only looked at honey bees, and failed to include bumblebees. Bumblebees are just as important in providing the required pollination to create much of the food we consume.

There was also a study done published by the NCBI. The study found that various groups of neonicotinoids are harming honey bees. They discovered that both clothianidin and and thiamethoxam persist in “extremely high levels” in planter exhaust material produced during the planting of crops treated with these insecticides. The research team also found neonicotinoid compounds in soil, including in fields where the chemicals were not even sprayed. They also found them in several plants and flowers visited by bees. Researchers determined that bees actively transfer contaminated pollen from primarily neonicotinoid treated corn crop and bring it back to their hives. The bees also transfer these compounds to other plants and crops that are not treated with the chemicals which demonstrates just how persistent these chemicals truly are in the environment and how easily they can spread.

It’s amazing how much information is surfacing within the past few months on this subject, it’s clear that we need to stop using these pesticides and begin using organic and permaculture methods of growing.

We invite you to vote FOR or AGAINST a “Worldwide Ban on the Use of Neonicotinoid Pesticides”. Please vote and also leave your comments at the bottom of this page.

Ban the Use of Neonicotinoid Pesticides Worldwide

The content in this  article was written by Arjun Walia for CE Collective Evolution.

there is need of the movement against use of chemicals.

If we want to keep eating food we need to stop killing the bees with our pesticides.

Should the use of “Neonicotinoid Pesticides” be banned worldwide? Yes.
The block of nicotinic acetylcholine receptors kills bees and the effect on mammals is controversial. In 2008, Germany revoked the registration of clothianidin. The pesticide comes originally from the “kitchen” of Shell who has not the best reputation for taking care of the environment.