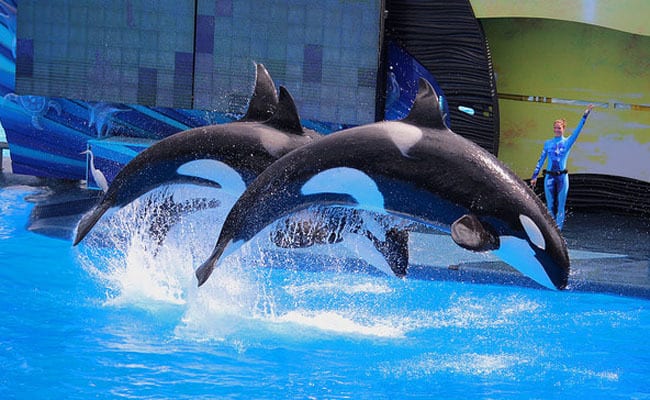 While we celebrated a major victory when SeaWorld pledged to end captive breeding of orcas and theatrical shows, animal advocates are questioning whether the company is actually serious in light of how it’s continued to use them, and are continuing to work towards making sure it can’t go back on its word.

Now, the Animal Legal Defense Fund (ALDF) and Representative Jared Moskowitz are renewing their call to ban the use of orcas in entertainment in Florida by passing the Florida Orca Protection Act (HB 1305), which was introduced earlier this year but didn’t get voted on.

The ALDF points out that while SeaWorld is supposed to phase out its orca shows by 2019, it’s now offering “Killer Whale Up-Close Tours” where visitors are allowed to feed orcas and help train them to do tricks, and it has also continued to use them in its signature performances and holiday shows.

SeaWorld has yet to respond to being asked whether it considers these activities to fall under its new corporate policy, but the ALDF and Rep. Moskowitz want to make sure that there’s a law in place to make sure it stands by its word.

“Marine parks continue to prove they cannot be trusted to make the rules on animal welfare,” said Moskowitz. “Despite SeaWorld’s promises that it would phase out orca shows, the park continues to offer new opportunities to interact with the animals and forcing them to perform for guests’ entertainment. Now we know why they hired lobbyist to fight against taking their promises and putting them into law – because they meant to break them all along.”

The Florida Orca Protection Act would ensure that SeaWorld keeps its promise and that no other marine parks can pick up whereit left off. Similar to the groundbreaking ban that was enacted in Californiain 2016, Florida’s bill would ban the use of orcas as performers in theme shows, ban captive breeding and end the import and export of orcas into and out of the state. Although it would grandfather in the orcas currently in Orlando, it will make sure that no others suffer there the way they have.

Not only would it bring about a legal end to orca captivity in two out of three states where orcas are currently held in the U.S., it also would send a strong message to other countries still holding them in captivity and exploiting them for entertainment.

“Companies can break a promise, not a law,” said Stephen Wells, executive director for the ALDF. “The only way to save countless orcas from suffering through a life in captivity is to codify SeaWorld’s promise, and the Florida Orca Protection Act will do just that.”

You can help by signing and sharing the petition urging lawmakers in the state to support and co-sponsor the Florida Orca Protection Act.

For more on how to help, visit the Animal Legal Defense Fund.

We invite you to share your opinion whether the use of Orcas in entertainment should be banned? Please vote and leave your comments at the bottom of this page.