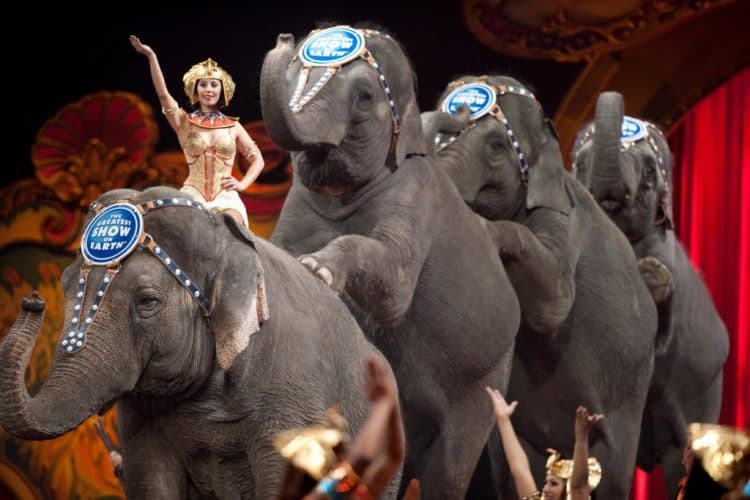 Animal welfare groups in Denmark are intensifying their calls for a total ban on wild animals in the country’s circuses after an annual elephant “bathing show” ended with one of the agitated animals smashing a vehicle as bystanders narrowly escaped injury.

The annual eventin the small seaside town of Karrebaeksminde sees elephants from a local circus, Cirkus Arenas, escorted to a nearby beach for a dip in the ocean and attracts large numbers of spectators.

This year’s event had drawn record crowds, with many thousands reportedly gathering along the elephants’ route and on the beach.

It appears that the proximity of spectators and the noise of hooting cars caused the elephants to became agitated, until one of the animals broke away to run among bystanders before lifting up and denting a parked car.

“The big animal stamped on the car’s hood, then gave the car some heavy blows with the trunk,” says a media outlet that had filmed the elephants bathing in the sea during the event earlier.

Local animal welfare group Dyrenes Beskyttelse says the animals showed clear signs of stress leading up to the incident, including flapping their ears, and cautions that the out-of-control situation could have had much more serious consequences.

“The incident on Saturday in which a circus elephant went berserk in Karrebaeksminde shows that wild animals do not belong in the circus,” says the group in a statement.

Some onlookers also reported seeing circus staff hitting one of the agitated animals in an effort to control it, adding to its distress,according to local media.

The director of Cirkus Arenas has since indicated that police will be brought in to better control the crowds at next year’s event, but Dyrenes Beskyttelse insists a ban on wild animals in the circus is the only solution.

“The conditions that wild animals like elephants [experience] in a circus – with small enclosures, performances and long journeys – means that they have high stress levels, and this episode shows clearly how dangerous that can be,” Dyrenes Beskyttelse veterinarian Yvonne Johansen tells Jyllands-Posten.

According to the organisation, Danish law already prohibits circuses from using most wild animals in their acts, but elephants, zebras and sea lions are exempt from this ban for “historical and traditional” reasons. The group is urging Danish residents to sign its petition calling on government to introduce a complete ban. “Circuses cannot provide wild animals like elephants with [the necessary] safety or animal welfare,” says the group.

Last month, a man walking in the woods in south-west Germany was killed by an elephant that had escaped from a local circus.

This article was first published by Earth Touch Network on 14 Jul 2015.

We invite you to share your opinion whether the exploitation of circus animals should be banned? Please vote and leave your comments at the bottom of this page: