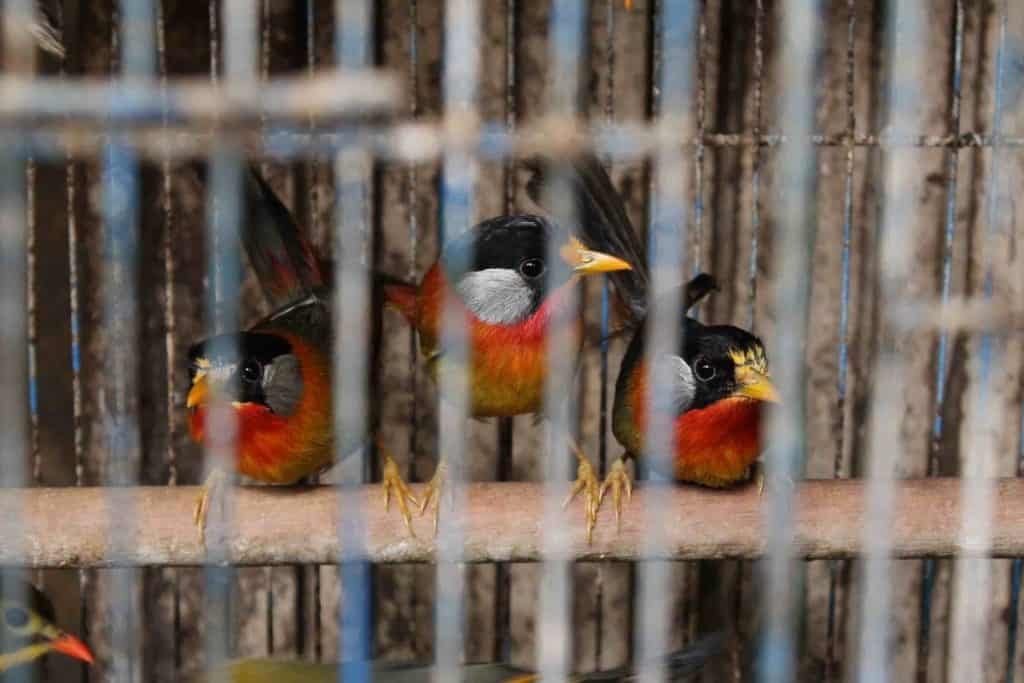 Thousands of birds, suspected to have been caught from the wild, are being sold openly in Vietnam, according to a new report by TRAFFIC, the wildlife trade monitoring network.

Many of the species on sale are threatened with extinction, warns the report.

In April 2016, researchers from TRAFFIC surveyed bird vendors — both shops and mobile sellers on motorcycles — in Ha Noi and Ho Chi Minh City, two of Vietnam’s largest cities. Over just a period of three days, they recorded more than 8,000 birds of 115 species for sale.

Of these, the scaly-breasted munia (Lonchura punctulata) and red-whiskered bulbul (Pycnonotus jocosus) were the most common birds on display. The researchers also recorded nearly 500 birds of nine species that are currently listed as threatened or near threatened on the IUCN Red List.

The red-breasted parakeet (Psittacula alexandri), for example, was the fourth most common species on display during the survey. Until 2012, this bird was considered to be under no immediate risk of extinction (listed as Least Concern), but its populations have suffered “moderately rapid decline” due to trapping for the bird trade, according to the IUCN, raising its threat levels to “near threatened” on the Red List.

Other threatened birds that were on sale included the endangered sun parakeet (Aratinga solstitialis), the chattering lory (Lorius garrulus avopalliatus) and the Java sparrow (Lonchura oryzivora).

The report also found that the number of species and volume of birds for sale has increased since 2008. Songbirds are particularly popular, the researchers noted, their trade likely driven by songbird competitions that are popular across several countries in Southeast Asia.

Nearly all the birds that the team recorded were native to Vietnam. About 90 percent of these birds have no regulations governing their trade under Vietnamese legislation, suggesting that the trade is going unchecked, the report noted.

“The survey findings are consistent with a thriving demand for native birds within Vietnam,” Kanitha Krishnasamy, Acting Regional Director for TRAFFIC in Southeast Asia, said in a statement. “However, as trade in most of the species seen is not regulated by law, it means large numbers of birds are being extracted with no oversight of sustainability or how severely it will impact wild populations.”

Even when a species is protected under the national law, enforcement remains weak, the researchers write, largely because law enforcement officers lack the skills to identify bird species correctly.

To ensure that the bird trade does not harm wild populations, monitoring and regulation of the trade needs to improve, the researchers add. This would include strengthening the current Vietnamese legislation, as well as updating and reassessing the country’s protected species list. In particular, the report calls for including species that are at risk of extinction, including those listed as threatened in the IUCN Red List, to be added to Vietnam’s protected species list.

“TRAFFIC stands ready to support Vietnamese authorities in any effort to review and strengthen current regulations,” said Madelon Willemsen, Head of TRAFFIC’s Viet Nam Office. “We will continue to provide information on the levels of bird trade in Viet Nam. This critical knowledge will help to identify the need and urgency to adjust policies and regulations so that Viet Nam meets its international commitments on conserving biodiversity.”

This article written by by Shreya Dasgupta was first published by Mongabay.com on 25 Sep 2017.

We invite you to share your opinion whether the wild bird trade in Vietnam should be stopped? Please vote and leave your comments at the bottom of this page.