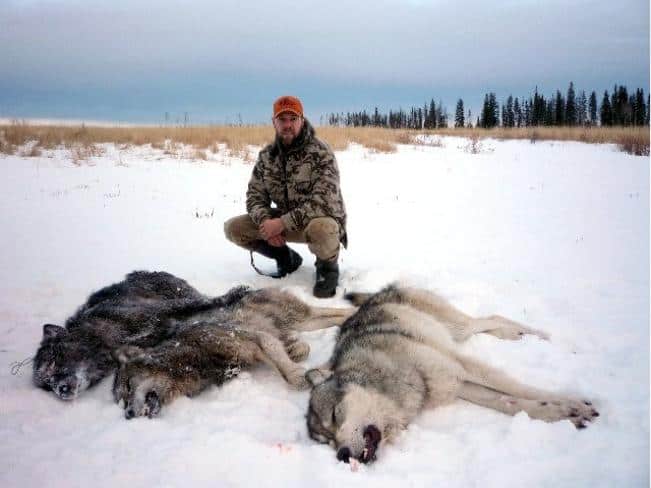 As all controversial government announcements are released when no one is watching, so too was the announcement by the Wynne govt. to begin a wolf cull in Northern Ontario.

Posted on Ontario’s Environmental Bill of Rights Registry on December 17, the Ontario govt. is proposing to remove the previous requirements for hunters to purchase a special hunting ‘seal’ to kill wolves and remove the restriction to kill only one wolf per season.

This wolf cull is not the same as the wolf culls of British Columbia, where sharp shooters in helicopters chase and exhaust wolves and then gun them down.

This cull is much worse.

In Ontario the Wynne govt. will allow any hunter holding a small game hunting license to kill two wolves per season and remove all restrictions on the killing of coyotes.

Unlike targeted culls where a specific number of wolves are killed, the Ontario cull allows for thousands of wolves to be killed each year.

Why? Because the moose population is rapidly declining in Ontario.

Rather than close the sport hunting of moose and calves, (yes one can still kill a moose calf in Ontario) and, or, protect moose habitat from intensive forestry and forestry applied herbicides that wither young seedlings eaten by moose during the winter months, it is simply easier to kill wolves and coyotes.

This cull was predicted by Peaceful Parks last year when the Ontario govt. first announced its ‘moose project’.

There is no reason to kill wolves or coyotes except out of hatred or for luxury fur products and we fear for their safety.

Here are a few sample comments from hunters who posted on the Ontario Federation of Anglers and Hunters’ facebook page.

Cody Perry Change the price of a moose tag to “one wolf pelt”. Eliminate limit on wolf hunt. Let the guys who shoot wolves and trade them for moose tags sell the tag for whatever price they can get. Cheapest bounty system for the tax payer, reduces moose harvest substantially, eliminates the draw, makes hunting wolves a feasible way to make a living, helps bring wolf population down to a sustainable level.

Chris Robinson get rid of cow and calf hunting … problem solved … I’m from the Yukon and the population is 2 to 1 moose to people … we never took a cow or calf … one bull a year and yeah there is less people than Ontario but there is also less area and more predators.

Joshua Booth The plan should include entirely eliminating cow and calf hunting and allowing residents to shoot as many wolves and coyotes as they like.

Unfortunately, the timing of the posting makes it impossible to reach anyone at the Ministry for more details and the closing date for this proposal is Jan. 18, 2016.

We invite you to share your opinion whether the wolf cull in Ontario should be stopped? Please vote and leave your comments at the bottom of this page:

In the event that you voted to stop the wolf cull in Ontario, please sign the petition: