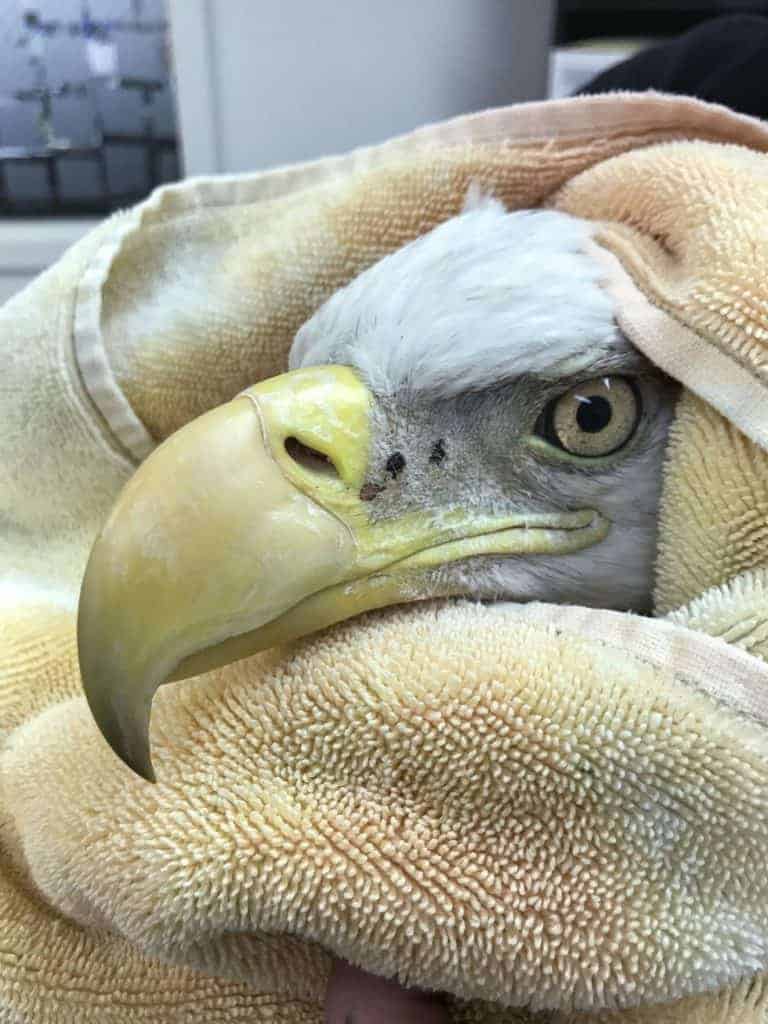 The death of a bald eagle—a national symbol—in the U.S. capital has stirred a wider debate about potential impacts of lead bullets and other sources of harmful metals in the environment, especially given a recent ruling by the federal government.

When veterinarians in Washington, D.C., took in a bald eagle on Tuesday, it was already in the advanced stages of lead poisoning. The animal had been reportedly picked up in Nanjemoy, Maryland, by an area police officer, who told the Washington Post the bird was sitting only 100 feet from a rural road.

Once at City Wildlife, an animal treatment center, tests revealed high levels of lead in the bird’s system. Despite efforts to expel the toxic substance, the bird died late Wednesday night. The bird had shown no physical indications of lead poisoning aside from unusual behavior.

According to Kristy Jacobus, one of the women who treated the bird, it’s the third eagle the center has seen this year but the only one treated for lead.

“It’s not uncommon,” she said for the center to treat lead-poisoned birds. But more often, they deal with pigeons that ingest lead at construction sites. Eagles, however, tend to ingest lead when they consume animals that have been shot with lead bullets.

Without more situational evidence, it’s nearly impossible to say exactly where the eagle came into contact with lead. But most often, they encounter the toxic element when they scavenge for food. After hunters shoot an animal, they tend to gut it, leaving the innards out in the open. These “gut piles,” as they’re referred to, then attract scavenging eagles.

Lead poisoning tends to take several days or weeks. Some eagles ingest the lead-filled remains of several animals before succumbing.

How Populations Are Impacted Today

So, is this eagle a canary in a coal mine?

Exactly how many eagles or other raptors succumb to lead poisoning and where they’re being poisoned is unclear. For every bird of prey that’s brought into a treatment center, more die unnoticed in the wild. As bald eagle populations rebound from historic lows, the sheer number of eagles people come into contact with is also rising. Just this week, populations in Wisconsin reached record highs.

“We don’t have a good idea about the magnitude of the problem,” said EJ Williams from the American Bird Conservancy. “It’s a real case-by-case basis.”

In California, for example, condors were severely impacted by the use of lead ammunition. The birds were regularly consuming lead-contaminated remains of hunted animals, and their population struggled to grow.

To combat this, the state outlawed lead ammunition in hunting in 2013, in a requirement that will phase in gradually until 2019.

How Populations Could be Impacted in the Future

Lead-free bullets are typically more expensive, and those opposing the bill argued that hunting would become less accessible for lower income hunters. Banning lead bullets also touched a cultural nerve among pro-gun groups that oppose any roadblocks to using firearms.

Scientist and wildlife conservationists, however, have long been calling for a lead bullet ban. In 2013, a group of scientists collectively released a statement warning that lead bullets could have yet-to-be-seen and unknown consequences in the future. Lead ammunition currently amounts to the second most used source of lead in the U.S. and frequently discharges the toxic substance into the environment.

In their statement, the scientists noted that lead bullet fragments can poison birds and people that eat contaminated meat.

Today, there’s not enough evidence to prove how and to what extent using lead ammunition on wild lands will impact wildlife in the future.

“A lot of refuges have eagle populations,” said Williams, though she noted that park officials often choose internally to forgo lead ammunition.

This article was first published by National Geographic on 08 Dec 2017.

We invite you to share your opinion whether there should be a universal ban on the use of lead ammunition? Please vote and leave your comments at the bottom of this page.