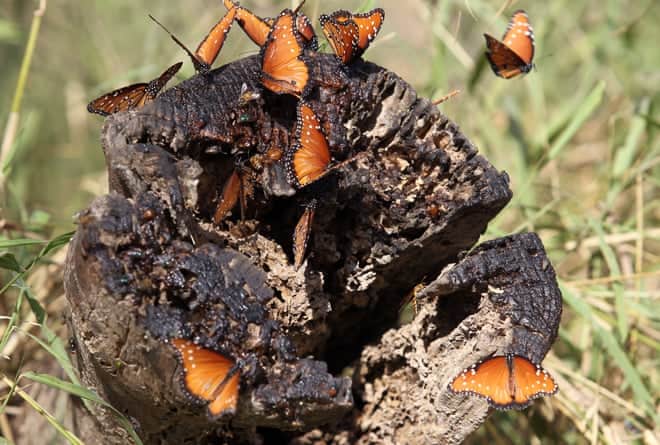 On any given day at the National Butterfly Center in Mission, Texas, visitors can to see more than 60 varieties of butterflies. In the spring and fall, monarchs and other species can blanket the center’s 100 acres of subtropical bushlands that extend from the visitor center to to the banks of the Rio Grande river, where their property, and US sovereignty, ends.

“It’s like something from Fantasia,” said the center’s director, Marianna Wright. “When you walk you have to cover your mouth so you don’t suck in a butterfly.”

Today the most diverse butterfly sanctuary in the country, and other protected areas in the lower Rio Grande Valley along the US-Mexico border, are under threat.

Last week, the US supreme court issued a ruling allowing the Trump administration to waive 28 federal laws, including the Endangered Species Act and the Clean Air Act, and begin construction on 33 new miles of border wall in the heart of the valley – and right through the butterfly center.

“Environmental tourism contributes more than $450m to Hidalgo and Starr counties,” said Wright, referring to the adjacent counties in the valley. “Many of the properties people choose to visit to see birds, butterflies and threatened and endangered species are all going to be behind the border wall. For us, the economic impact is potentially catastrophic.”

“Walls have fragmented our habitat,” said Scott Nicol, co-chair of the Sierra Club Borderland team. The various patches of land that provide refuge for these animals will become “less viable, with less and less places for them to go”.

A July letter sent from US Customs and Border Protection to a not-for-profit environmental group and seen by the Guardian describes the route and possible components of the project as including a 30ft-tall concrete and steel wall, roads, and a 150ft “enforcement zone” where all vegetation will be cleared.

With construction of the wall due to begin in February, people like Nicol fear that the barrier will not only destroy habitat and undermine ecotourism but also lead to an increasingly deadly border as undocumented immigrants are pushed further and further into marginal and dangerous areas.

“This is not just that they will drive ocelots to extinction,” said Nicol, referring to the critically endangered wild cat found in the Rio Grande Valley. “Families trying to come into this country will be pushed into the desert to die.”

“Border walls are death sentences for wildlife and humans alike,” said Amanda Munro of the Southwest Environmental Center, an organization that works to restore and protect native wildlife and habitats. “They block wild animals from accessing the food, water and mates they need to survive. They weaken genetic diversity, fragment habitat, and trap animals in deadly floods. At the same time, they drive desperate asylum seekers to risk their lives in the unforgiving desert.”

For Donald Trump, the new section of the barrier is making good on a campaign promise to build a “big beautiful wall”. A barrier that will add to the nearly 700 miles of walls and fences that already exist on or near the border.

More than 200 species of resident or migrating butterflies make homes at the butterfly center over the course of the year, including the vibrant Mexican bluewing, the tiny vicroy’s ministreak and the black swallowtail, which carpets the wild dill at the property with its eggs each spring. The center opened in 2003 and is the flagship project of the North American Butterfly Association.

“It’s going to cut right through here,” said Wright, showing where the wall will split the center’s property 1.2 miles from the border and cut off access to nearly 70% of its land.

Trump has expansive federal powers to construct the border wall on both private and public land. Since 2005, the Department of Homeland Security has had the power to waive numerous environmental laws in the name of national security.

And the federal government can, and has, used eminent domain law to acquire privately owned land for public use.

“We fully anticipate that they will seize the land by quick take,” said Wright, referring to a Depression-era provision of the eminent domain law that gives federal agencies the right to take property without compensation or adjudication. “Legal claims are not addressed or settled. You don’t get your day in court. You don’t get to negotiate appraisals or offers. Nothing,” said Wright.

On Tuesday, the president threatened to use defense spending if his plans to build the wall were challenged. “If the Democrats do not give us the votes to secure our Country, the Military will build the remaining sections of the Wall,” Trump said in a tweet.

For Wright, this threat could mean the end of the butterfly center and enormous harm to its dozens of butterfly species and the threatened Texas tortoise, Texas indigo snake, and Texas horned lizard that are also found there.

“It is truly a sight to behold,” said Wright, looking out from the bank of the Rio Grande river.

“They are violating our constitutionally protected rights, and that should terrify everyone,” she said. “Even if you don’t care about butterflies, you should care about this.”

This article was first published by The Guardian on 13 Dec 2018.

We invite you to share your opinion whether this butterfly sanctuary should be bulldozed to make way for Trump’s border wall? Please vote and leave your comments at the bottom of this page.