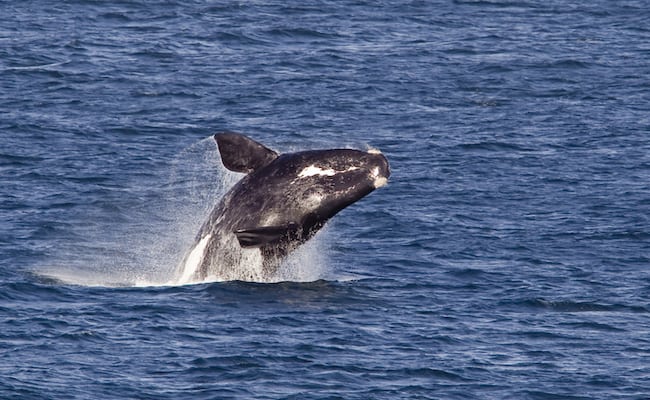 Thousands of whales, dolphins and other vulnerable marine life could lose their lives now that the Trump administration has indicated it will move forward with allowing corporations to use seismic tests off the eastern coast of the country.

Seismic tests are generally incessant and incredibly loud at excess of 250 decibels. The blasts can even deafen whales and dolphins, which rely on their sense of sound in order to navigate. Those with hearing damage are liable to lose their orientation and become unable to find food and mates and could even beach themselves.

The North Atlantic right whale, down to a population of 400 or so, is particularly vulnerable given that it frequents the areas where testing has been proposed. Blasting crippling sounds near this vulnerable species is nuts from a conservation perspective.

Though we may think of the consequences for larger, more rare marine life first, plenty of other sea creatures will also have their lives disrupted like fish and sea turtles, which can hear the tests (typically occurring every 10 seconds or so) miles away from the blast sites.

Why are we taking these risks with seismic tests? Well, that introduces a whole ‘nother set of environmental problems: they’d be conducted by oil and gas companies to determine the viability in Atlantic coastal waters, which have been free of drilling for more than 50 years.

If and when the seismic tests do help the corporations locate fossil fuels, it’s only a matter of time before a spill happens, killing marine life in a new way. Not to mention that burning these buried fuels will heat up the planet and in turn the ocean, once again killing further marine species.

Previously, the Obama administration gave consideration to allowing seismic testing before ultimately deciding to scuttle these proposals because of the potential damages to the marine life. The Bureau of Ocean Energy Management even put out a studyexpressing concern that about 2.5 million dolphins and half a million whales were at risk of being harmed or killed by this aural terror.

It’s a shame that the Trump White House has ignored the research and decision from the previous administration to hook up their friends in the fossil fuel industry. Just because humans won’t be hearing these underwater blasts doesn’t mean they won’t have a massive effect on a critical ecosystem.

We don’t need to be drilling in these waters in the first place, let alone conducting dangerous tests that could permanently disorient tens of thousands of sea creatures. Perhaps if we collectively tell Secretary of the Interior Ryan Zinke just how much we disapprove of this plan they won’t grant seismic test proposals after all. Sign and share this new Care2 petition to protect our whales and dolphins that already face enough challenges in their quest to survive.

This article was first published by Care2.com on 2 Dec 2018.

We invite you to share your opinion whether seismic testing off the Atlantic Coast should be banned? Please vote and leave your comments at the bottom of this page.