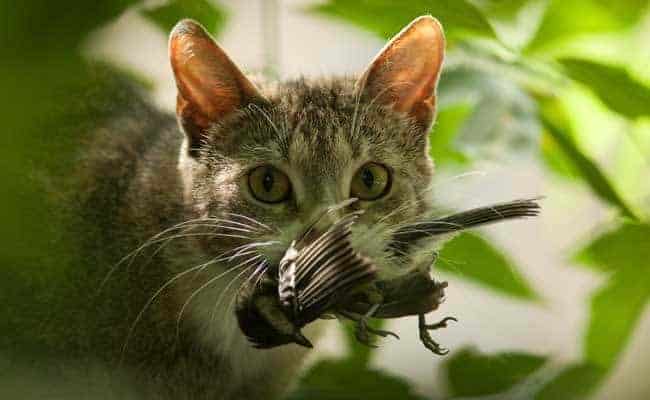 The only sure way to prevent pet cats from killing birds is to keep them inside or to walk them outdoors on a leash. These methods are encouraged by veterinarians, animal welfare groups and environmentalists.

Yet, less than half of the estimated 73 million cats in the United States live indoors according to the National Wildlife Federation. Some owners feel that it’s not natural for cats to be kept inside while others believe their cat would be unhappy if not allowed to explore the outdoors.

Whatever the reason, predation by outdoor cats on birds and other wildlife is a real and legitimate concern according to the HSUS. Experts say that a cat’s prey drive is so strong that even well-fed cats may naturally enjoy hunting birds or other small mammals.

Animal Welfare Groups Work Together to Help Birds and Cats

At the Portland Audubon’s Wildlife Care Center, nearly 40 percent of the birds brought in for treatment are either caught by cats, orphaned by cats or are fledglings “rescued” by the public to prevent imminent cat predation. Over the past 20 years, the Center has treated more than 20,000 cat-caught animals, representing more than 100 local species.

The Audubon Society of Portland and the Feral Cat Coalition of Oregon along with other area animal shelters have joined together to form the Cats Safe at Home program. The program encourages local residents not to allow their pet cats to roam free. The mission of the campaign is to bring the community together toward a safer and healthier environment for both cats and wildlife. Local residents who are hesitant about confining their cats are encouraged to install catios (cat patios). These enclosures are typically decorated with old tree stumps and perches for climbing and scratching, planters with cat-friendly turf and other vegetation, tarps to provide shade and protection from the elements and a ladder for access to and from the house.

Experts at Wild Birds Unlimited encourage homeowners who want to set up bird feeders to bring their cats indoors. Feeders can be set up near a window so cats can enjoy watching the birds without attacking them. Here are other tips for protecting birds in your yard and at your feeder:

Find out when common birds in your yard may be fledging and try to confine your cat more than usual at those times. Fledglings are just learning to fly and are easy prey for cats.

A number of products have been designed by companies and individuals to help deter outdoor cats from killing birds. They include collars with bells that alert birds to a cat’s presence. A product called CatAlert that produces a beeping sound every seven seconds making it difficult for a cat to go undetected by its prey. The CatBib, designed by Cat Goods Inc., is a hanging colored bib that is attached to a cat’s collar. The bib offers a visual cue that the cat is on the prowl and serves as a physical barrier to the cat’s paw when he attempts to attack his prey.

In 2015 the Global Ecology and Conservation Journal published the results of a study on Birdsbesafe, a brightly-colored cat collar cover. The two-season field study used a research team at the University and cat-owning volunteers from the community and concluded that the Birdsbesafe collar cover reduced bird fatalities by 87 percent.

The collar is the creation of Nancy Brennan, a bird watcher, and bird lover, who was heartbroken every time her husband’s cat, George, came through the cat door with a bird. It was when George brought home a ruffed grouse that Brennan decided it was time to stop the killing.

“For four years George had been going out at will through his cat door,” said Brennan, a Vermont resident. “I felt he would have been inconsolable if we forced him to stay inside.”

Having read that song birds see bright colors Brennan decided to sew a colorful cotton tube of brightly-colored fabric to cover George’s breakaway collar hoping it would make it easier for the birds to see him when he was stalking. It worked!

“George didn’t catch any birds the first day, week or month,” Brennan said. “He had always brought his prey through the cat door to us, so the difference was dramatic.”

George didn’t seem to mind wearing the collar cover or the change in his lifestyle. He even started sleeping in at dawn, instead of hunting. In the next 18 months, over two summers, George caught maybe two or three birds, Brennan said. She launched Birdsbesafe in 2009 and after the study published her sales really began to pick up. She is excited to hear success stories from her customers throughout the U.S., Canada and Europe.

“I didn’t start this business because I want people to leave their cats out,” Brennan said. “I would love if everyone kept their cats inside. I see this as a positive step towards ending a problem that’s larger than I personally know how to solve.”

We invite you to share your opinion whether we should prevent our cats from killing birds? Please vote and leave your comments at the bottom of this page.