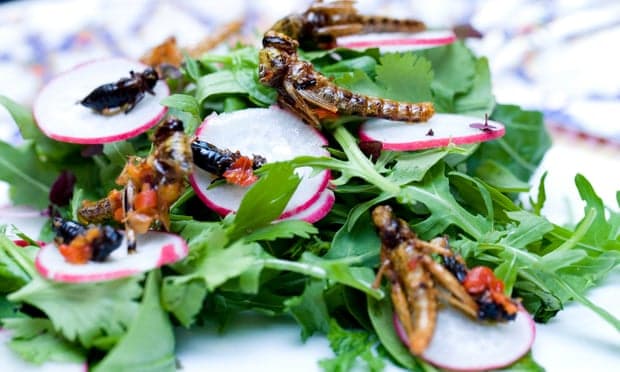 The thought of rising sea levels and more intense heatwaves are enough to keep you up at night. But while we all know the situation is getting more serious, most of us are preoccupied with work, doctor’s appointments and paying bills – and these immediate, visceral worries win every time.

There isn’t much time left to figure out how to bring global warming closer to the forefront of people’s minds and persuade us to reduce our carbon footprints. In fact, we have just 12 years left to keep global warming to 1.5C, according to last week’s landmark UN report. Anything beyond this will massively worsen the risks of drought, floods, extreme heat and poverty for hundreds of millions of people.

Reducing our meat intake is crucial to avoiding climate breakdown, since food production accounts for about a quarter of all human-related greenhouse gas emissions, and is predicted to rise. In western countries, this means eating 90% less beef and five times as many beans and pulses.

Edible insects have been hailed as a solution to both global food shortages and reducing emissions from animal agriculture, but despite the industry’s best efforts, our response when faced with a cockroach is disgust. Even in London edible insects are seen as nothing more than a gimmick, and there are only a handful of restaurants serving them up.

But new research from Switzerland and Germany may have found out how to persuade people to eat insects – and it could have a huge impact on lowering human-led carbon emissions.

Up until now, retailers and restaurants have marketed edible insects as a more sustainable option and a healthy source of protein. But the researchers explain the problem with getting people to switch to environmentally friendly behaviour is that it often requires foregoing immediate pleasure for distant benefits, and edible insects have been wrongly framed in this way.

Before the 180 participants in the study were offered a chocolate truffle filled with mealworms, half of the group were given a flyer saying that eating insects was good for them and the environment, while the other half were told the insects were either delicious or trendy to eat.

About 62% of those given health or environmental incentives chose to eat the truffle, compared with 76% who ate the truffle after being told it would taste good or make them trendy. And the latter group rated the truffle as tastier.

The researchers concluded that we need to switch the message about saving the planet from altruism to pleasure. They back up their argument with previous studies showing that attitudes based on emotions are more malleable than those grounded in rational claims.

The lead researcher, Sebastian Berger, says now that the technology and scale of edible insect farming is improving and increasing prices will start to fall and free up producers to take the study’s findings on board. He cites the food manufacturer Essento Food AG, whichhe says is leading the way in positioning insects as upmarket, delicious food.

He calls this the “sushification” of the mealworm, since raw fish was until 20 years ago also seen by westerners as disgusting to eat.

Veganism, until recently, was viewed as a quirky lifestyle choice or protest, but about 3.5 million people in the UK alone now eat a vegan diet.

There are several arguments for swapping meat for plants: health and environmental benefits, and it tastes better. Given the new study, focusing on the taste benefits of plants could be a huge success. Another study found that labelling vegetables with “indulgent” descriptions such as “dynamite chili and tangy lime-seasoned beets” significantly increased the number of people choosing and eating vegetables compared with those given basic or healthy descriptions, such as “lighter-choice beets with no added sugar” or even “high-antioxidant beets”.

This is already happening on a small scale, with some vegan restaurants eschewing the “V’ word altogether in their marketing and on menus and presenting themselves as equal to meat, not just a healthy alternative, while some are gaining recognition simply for being “tasty”, not “tasty for vegan food”. The US-based vegan soul food restaurant The Land of Kush was voted best restaurant last year by the Baltimore City Paper.

As the vegan food industry expands to meet burgeoning demand, millions of pounds’ worth of investment is going into making plant-based burgers taste just as good or even better than the beef burgers we grew up on. But the less said about how our eating habits could potentially save the planet, perhaps the closer we’ll come to actually achieving it.

This article was first published by The Guardian on 15 Oct 2018.

We invite you to share your opinion whether you would eat insects to save the planet from global warming? Please vote and leave your comments at the bottom of this page.