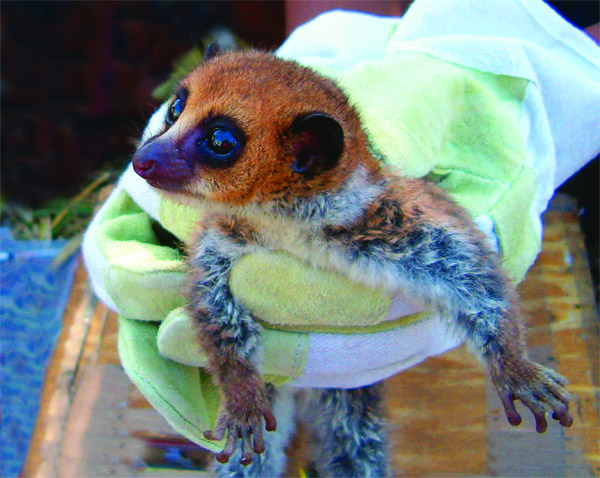 Researchers have discovered a new — and critically endangered — species of lemur on the island of Madagascar. The primate is formally described in the journal Molecular Phylogenetics and Evolution. The Lavasoa Dwarf Lemur (Cheirogaleus lavasoensis) inhabits three isolated forest fragments in the Lavasoa Mountains in southern Madagascar. Like other dwarf lemurs, the species is nocturnal, dwells in the forest canopy, and hibernates during the cool, dry season, living on fat reserves stored in its tail.

While the species was first discovered in 2001, genetic analysis has only now revealed it to be distinct from the closely-related Cheirogaleus crossleyi.

“Together with Malagasy scientists, we have been studying the diversity of lemurs for several years now,” said Andreas Hapke of the Institute of Anthropology at Johannes Gutenberg University Mainz in a statement. “It is only now that we were able to determine that some of the animals examined represent a previously unknown species.”

Over the past dozen years, Hapke and other researchers have collected samples from 51 individuals. But the scientists say that number may represent the entire population of the species.

“Preliminary estimates indicate that there are less than 50 individuals remaining,” according to a statement from Johannes Gutenberg University. “The Lavasoa Dwarf Lemur is thus rare and extremely endangered.”

Cheirogaleus lavasoensis joins the growing list of new lemurs described by scientists. More than 40 have been documented since 2000.

Lemurs occur naturally only on the island of Madagascar. Widespread habitat loss means that more than 90 percent are considered at risk of extinction, according to the IUCN Red List. At least 17 species have already gone extinct.