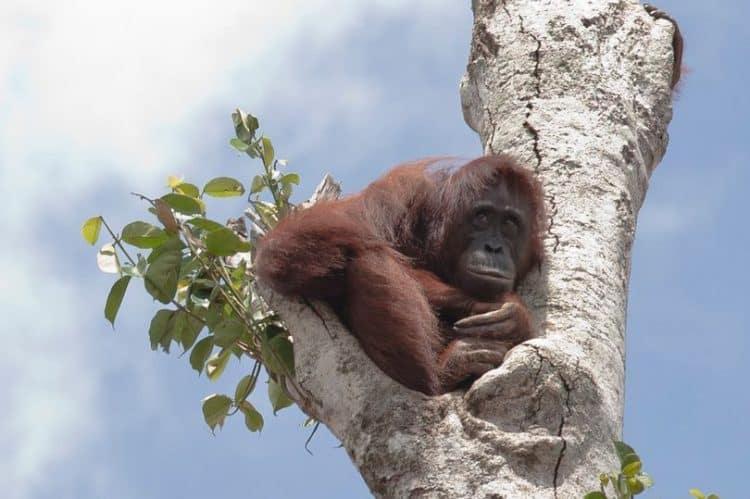 A starving, heavily pregnant orang-utan clings to a solitary tree high above what had been pristine rainforest for ­millennia – till giant bulldozers moved in and flattened it in days.

Boon-Mee was too weak and frightened to leave the trunk where she had sought sanctuary as the machines tore down her ­jungle home in Borneo, reports the Sunday People.

That meant she could not forage for food – condemning herself and her unborn baby to an agonising death.

Boon-Mee seemed doomed to share the fate of so many orang-utans in Indonesia, where palm-oil plantations are destroying the primates’ tropical habitats on Borneo and Sumatra.

Hundreds of apes are slaughtered every year with guns and machetes in the drive for profits.

But in fact Boon-Mee was lucky because in her case the plantation owners belong to a conservation group and told UK-based charity International Animal Rescue about her.

An IAR team – backed by local forestry officials – was despatched and spent hours scrambling over fallen trees, often having to wear masks because stumps had been torched and were still smouldering.

When they finally arrived at the scene, they found not just Boon-Mee but three other orang-utans.

Charanya had a baby and was desperately searching for food.

Kalaya was semi-conscious and lactating, leading the team to think she’d just had a baby which had either died or had been taken as a pet.

Meanwhile, Boon-Mee was surviving on bark.

IAR official Lis Key said: “It’s heartbreaking to see the appalling state of these animals as their habitat is razed for the palm oil industry – they were weak from hunger. It’s a small comfort that this time rather than chase them off or kill them, the ­company did the right thing and ­contacted us.”

Boon-Mee was the trickiest of the primates to catch because she was too weak to climb down from the tree.

In the end, rescuers shot her with a tranquilliser and caught her in a net.

The three adults and one infant were taken to a refuge, where Boon-Mee successfully had her baby.

All the apes were nursed back to health and later released into the wild deep in another part of the forest. Lis said: “Despite the condition they were in, they really are the lucky ones.

“The worst thing is there are hundreds of orang-utans who won’t be so lucky because of the awful conditions they are forced to try to survive in.”

And IAR warn deforestation for palm oil is the No1 cause.

The oil is used in up to half of all processed foods, is increasingly used as bio-fuel and is a key ingredient in items like shampoo and cosmetics.

Lis said: “There are plenty of alternatives to it but none is as cheap”.

And shoppers often don’t realise how widely it’s used because it can legally be ­tagged “vegetable oil” on product labels.

But the EU plan to introduce new labelling rules next year.

This article was  first published by The Mirror on 13 July 2019.