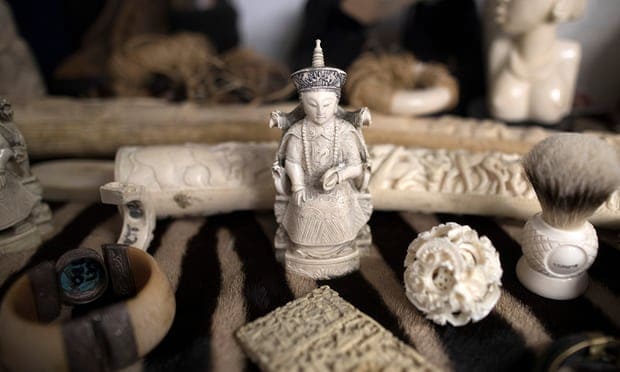 Environmental campaigners believe that public pressure is finally about to force the environment secretary, Michael Gove, to introduce a blanket ban on the commercial trade in ivory in the UK.

More than 60,000 responses were received, half of them coming in the week running up to Christmas, making it one of the biggest consultations in Defra’s history. Of the responses analysed so far, the overwhelming majority support a ban.

The emotive power of the issue was illustrated at the general election when Lady Borwick, the president of the British Antique Dealers’ Association and the Tory MP for Kensington, narrowly lost her seat after she opposed a complete ban, a stance that became an issue during her campaign.

“I think the government will now go for an effective closure for all commercial trade in ivory due to political pressure,” said Dominic Dyer, an adviser to the Born Free Foundation. “After the shock of losing Kensington at the election because of huge public anger over Borwick’s lobbying for the antiques industry to maintain the UK ivory trade, everyone in the Tory party, from the prime minister down, can now see this issue is political poison.”

For now, the UK prohibits only the sale of ivory pieces produced after 1947, a loophole that concerns law enforcement experts.

The former Metropolitan police commissioner, Lord Hogan-Howe, said in a House of Lords debate just before Christmas that the current domestic ivory market was “fuelling demand for ivory and providing a hiding place for illegal modern ivory to be laundered through the legal market”.

However, the Defra consultation document lays out the possibility of retaining exemptions to the ban, including a proposal to allow the “continued sale of items containing ivory of artistic, cultural or historic significance”. This would please antique dealers and the auction houses that have lobbied hard for such an exemption, but it would dismay wildlife groups.

“We believe the only logical and sensible option to contribute to reducing the demand for ivory and to save elephants from extinction is a total ban of the trade,” said Audrey Gaffney, of Action for Elephants, one of the wildlife campaign groups that responded to the consultation. “Any kind of partial ban will send the message that trading ivory remains acceptable and that ivory is a desirable commodity with intrinsic monetary value.”

Hogan-Howe warned that exemptions allowing the sale of items of artistic, cultural or historic significance were “too subjective and too broadly drawn”, and said he worried about the ability “of the trade entirely to police itself”.

In its response to the consultation, Action for Elephants said only legitimate acquisitions by museums should be exempted, and that these should be subject to authorisation by the Department for Digital, Culture, Media and Sport, which would keep a database of all registered items.

Tory election strategists admit that the government’s decision to abandon its commitment to a ban – a 2010 and 2015 Tory manifesto pledge – was exploited by opposition groups at the last election.

Mark Wallace, the executive editor of ConservativeHome, noted: “Conservative policy decisions certainly exacerbated that problem – in particular, the pledge of a free vote on fox hunting and the failure to clearly confirm support for a ban on ivory, neither of which were central issues to the national campaign, nonetheless acted as recruiting sergeants for Labour online.”

After China introduced a full ban on the ivory trade at the start of this year, the UK’s failure to have implemented one of its own has come under fire.

In a recent article, the foreign secretary Boris Johnson acknowledged China’s lead was having an impact. “If you track the volume of online advertising for ivory products, you will find that it declined by almost a third in the first four months of 2017, compared with the same period last year,” Johnson noted. “The price of raw ivory also appears to be falling, reducing the profits to be made from butchering elephants.”

A royal dimension could also prove influential. Both the Duke of Cambridge and Prince Harry, who has recently been named president of African Parks, want more done to close down the illegal ivory trade.

An international conference in London in October on how to protect wildlife, to be hosted by Gove and Johnson, could prove embarrassing for the government if any exemptions to the ban it decides on are considered too broad.

The number of elephants has declined by almost a third in the last decade. Around 20,000 a year are still being slaughtered because of the global demand for ivory.

This article was first published by The Guardian on 07 Jan 2018.

unbelievable that we have all been blaming only China when all the developed nations of the world are STILL (in 2018!!) trading fancy goods made of the front teeth of murdered elephants. inhuman and disgusting.