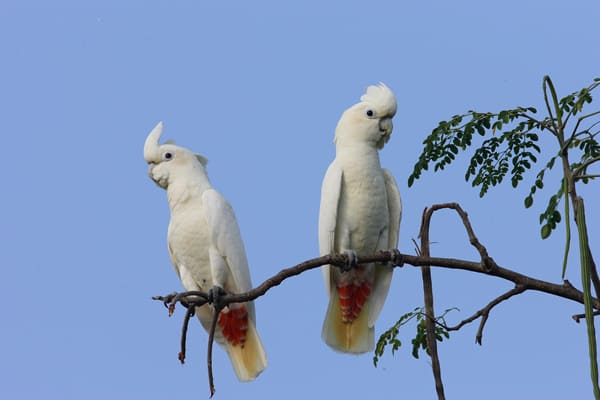 One kilometer off the Philippine island of Palawan lays the Rasa Island Wildlife Sanctuary; here forest grows unimpeded from a coral island surrounded by mangroves and coral reefs. Although tiny, over a hundred bird species have been recorded on the island along with a major population of large flying foxes, while in the waters below swim at least 130 species of coral fish, three types of marine turtles, and that curious-looking marine mammal, dugongs. Most importantly, perhaps, the island is home to the world’s largest population of Philippine cockatoos (Cacatua haematuropygia), currently listed as Critically Endangered.

But, although uninhabited by people, Rasa Island may soon be altered irrevocably by human impacts. Officials have proposed to build a coal-fired power plant directly across the strait on the mainland of Palawan with its ‘stack shadow’ (the radius surrounding a coal plant of 0.8-1.6 kilometers) reaching all the way to Rasa Island Wildlife Sanctuary. But the coal plant’s impacts, in a nation blasted by worsening typhoons, could stretch even further.

The population of Philippine cockatoos on Rasa Island is booming. With the help of conservationists the population has gone from 25 individuals in 1998 to 250 today, representing a quarter of the world’s total population (approximately 1,000 birds). More importantly, it is the only population that appears to be thriving. But conservationists say a 15-megawatt coal power plant by DMCI Power Corporation could change all this.

“The proposed power plant has the potential to advance as the single-most [important threat to] the survival of the critically endangered species as a whole,” reads a position paper on the proposal by the Katala Foundation; Katala is the local name for the Philippine cockatoo.

The stunning Katala, only found in the Philippines, is dressed in beautiful white feathers and sports a large curving beak. The species is easily-identified by red feathers on the underside of its tail, giving it an additional name, the red-vented cockatoo. As members of the parrot family, cockatoos are generally social and quite vocal.

Conservationists warn that the construction of the coal plant would lead to higher mortality rates for Philippine cockatoos due to collisions and electrocutions on power lines. Other birds, and even large flying foxes, are also expected to be impacted.

“Even more worrying is that the power plant would disrupt the flight path of the cockatoos from the mainland back to the island,” Peter Widmann the Vice President of the Katala Foundation told mongabay.com. Infrastructure and power lines would cut-off the birds’ route to the mainland during breeding season when parent birds are busy collecting food for chicks. Less food would mean fewer babies surviving to adulthood, eventually resulting in a wholesale decline in the island’s cockatoo population.

Philippine cockatoos are already struggling against on-going deforestation of lowland rainforests and the illegal pet trade, whereby chicks are stolen from nests. Now, experts fear the coal plant could offset the best hope for the birds so far: the rising population on Rasa Island.

“The most urgent recommendation is the search for an alternative site,” Widmann says. “The location—so close to an ecologically sensitive area and human settlements—would be unacceptable, even if less polluting fuels for energy generation would be utilized.”

The town of Narra is currently known as the Philippine Cockatoo Capital of the World, but that moniker may change if a the coal plant is built.

The impacts of a coal plant in Narra would extend well-beyond the Philippine cockatoo: local people and even the Philippines as a whole could be affected.

“The majority of the local population is worried about the plans. They particularly are afraid of negative health effects caused by the burning of coal,” Widmann told mongabay.com.

Burning coal emits a wide-variety of toxic compounds into the environment such as mercury, arsenic, beryllium, cadmium, lead and chromite. Local health impacts are well-documented, including respiratory and cardiovascular disease, as well as trachea, bronchitis, and lung cancer. In 2008, the World Health Organization (WHO) estimated that burning coal leads to a million premature deaths every year worldwide.

In addition, mercury pollution from coal-fired power plants stays in the environment, moving upwards through the food chain.

“This aspect of pollution is particularly relevant for Palawan, where a high proportion of animal protein for human nutrition is derived from fish and other seafood,” reads the position paper by Katala. “Mercury is long known to accumulate in food chains, particularly marine ones, and can cause severe health problems for humans consuming contaminated sea food.”

The coal-fired power plant will likely degrade the marine waters around Narra even aside from mercury pollution. Discharging chlorine and sulfates directly into the ocean, the coal plant will also raise the local waters’ temperature.

“The power plant would use several thousand cubic meters of sea water per hour for cooling purposes. The water at the outfall would be up to eight degrees centigrade warmer than the ambient sea water. Marine organisms, particularly plankton and coral reefs, which are the basis for most marine food webs, are very susceptible to thermal pollution,” explains Widmann. “Coral bleaching near Rasa was already observed during severe dry seasons. Yet another source of heat would add stress to the ecosystem and could prove to be catastrophic.”

Widmann notes that locals, many of whom make their living from fishing, fear that the coal-powered plant could devastate their livelihoods—and fishing isn’t the only economic activity that could be hampered.

“Rasa Island is among the top-ten birding destinations in the Philippines. Many signatories of the online petition against the coal plant have visited Rasa before and are shocked to hear about the plans,” explains Widmann. “If the project would push through, local tourism certainly would suffer.”

Finally, carbon emissions from the coal plant will contribute to global climate change, which has not been kind to the Philippines. This nation of islands has been decimated by unusually large and off-season tropical storms in recent years, including Typhoon Bopha last year which killed over 1,000 people. In 2011, Typhoon Sendong also killed over a thousand people. While the death tolls of these typhoons were likely worsened by widespread deforestation and mining, scientists say global warming is likely increasing the severity of typhoons and hurricanes worldwide.

But, according to Peter Widmann, the government, both local and federal, continues to push for coal.

“The local government points out that coal is used all over the world for energy generation,” he says. “The Department of Energy promotes coal despite its known effects on climate change.”

The Philippines is heavily dependent on coal-fired power plants for energy production even though coal is the world’s most carbon-intensive fuel. Currently, the Philippines has nine coal plants producing 4,278 megawatts and recently the nation has approved 16 additional coal plants, including the one in Narra, potentially adding another 4,522 megawatts of coal-powered energy.

In its position paper, the Katala Foundation says that the coal-power plant at Narra will be especially polluting.

“Since low grade coal from Semirara would be used, the impact of the coal plant on man-made climate change would be disproportionately high.”

It doesn’t have to be this way, according to Bart Duff, a retired economist from the International Rice Research Institute. While producing briefing paper for the Palawan Chamber of Commerce and Industry on the Narra coal plant, Duff discovered that the Narra coal plant was unessential.

“My calculations indicate the local electric cooperative has greatly overestimated its energy requirements for the next 10 years making the coal plant an expensive and unnecessarily costly addition to the energy mix for Palawan,” Duff told mongabay.com.

Still, even if Palawan decides to boost its energy production, there are alternatives. Governments often dismiss other options based solely on the upfront cost compared to coal, but Duff says even here there is a better option

“There exist more economic options. Particularly the use of mini-hydropower with its very lower rate—Php 6.5896/kw-hr. We have about 60 Gigawatts of hydropower which could be brought online within 2-3 years,” says Duff.

While coal may be cheap upfront, the long-term cost to people and the environment is massive. Such costs, known as “externalities” to economists, are not paid by energy companies, but by society as a whole.

“When we include all the externalities of coal (long-term health, degradation of the environment, and contributions to greenhouse house gas accumulation) in the cost calculations coal isn’t as attractive as perceived,” explains Duff. “Of course, the reality is that the externalities are not included at this point.”

A landmark study in 2011 estimated that coal-fired power plants cost the U.S. $523 billion a year in externalities. Of course, even the addition of such massive externalities doesn’t account for what may happen to Philippine cockatoo’s chances for long-term survival if the Narra coal plant moves ahead as planned.