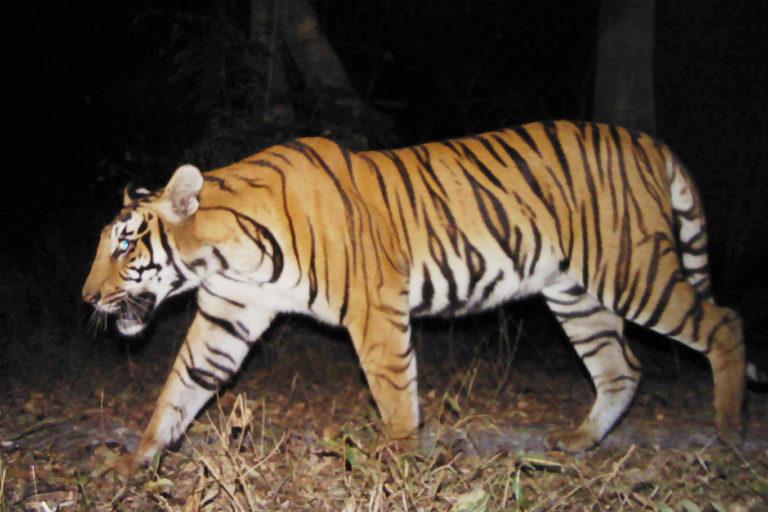 From the late 1980s until 2003, recurring ethno-political violence rocked Manas National Park, a protected area in the northeastern Indian state of Assam, in the Himalayan foothills. The conflict changed the park’s spread and abundance of wildlife, including the endangered Bengal tiger (Panthera tigris tigris).

But Manas’s continuity with Bhutan’s Royal Manas National Park (RMNP) has helped shelter and preserve its overall wildlife diversity, according to a new study published in the Journal of Threatened Taxa.

The study looked at the state of wild mammals in the aftermath of the unrest, and underscored the importance of landscape connectivity for giving a fighting chance to species to survive in the face of conflicts and other disturbances, said lead author M. Firoz Ahmed,a scientist with the NGO Aaranyak.

“If we model our conservation areas in such a way so that animals can move during disturbances and then they can move back to reoccupy their home ranges or territories, then we have a chance to keep the biodiversity intact,” Ahmed told Mongabay-India.

The TraMCA, conceived by officials from the forest departments of Assam and Bhutan and partnering NGOs, is now a model for the international conservation community and is being mainstreamed by both the Indian and Bhutan governments, Ahmed said.

The study resulted from an extensive camera-trapping exercise across the three ranges of the MNP: Panbari, Bansbari and Bhuyanpara. It was only in 2017 that surveys could be undertaken simultaneously across all three ranges of MNP.

The camera traps detected “almost all mammalian species expected to occur in the region,” with the exception of sloth bears (Melursus ursinus) and fishing cats (Prionailurus viverrinus), the authors write. The connectivity of the protected areas within TraMCA seems to have helped.

“The contiguity within TraMCA … certainly has a positive effect contributing to the repopulation of large carnivores in the aftermath of the conflict as RMNP has acted as a refuge for the animals displaced by disturbances in MNP,” the authors add.

In fact, tigers seem to be making a comeback in the landscape. Tiger numbers are estimated to have increased from 14 in 2011-2012, to 21 in 2016. Park officials put the latest figure at 31 as per preliminary findings.

Ahmed said that although there was some population loss in this process — that is, some animals in the new host area may die from fighting, starvation or other factors when they move — connectivity must be incorporated when planning conservation, especially for protected areas.

The national park is also part of the core zone of the 2,837-square-kilometer (1,095-square-mile) Manas Tiger Reserve, and now buzzes with both domestic and international tourists eager to train their cameras on the tigers as well as the rhinos, wild buffalos (Bubalus arnee) and the blink-and-you-miss-them beautiful birds.

The park saw turbulent days from the 1980s until 2003 following the demand for a separate Bodoland territory in the state. (Bodos are the largest tribal group in Assam.)

“During this period the population of Indian rhino was poached out, necessitating a reintroduction program to repopulate the park,” said study co-author Dipankar Lahkar, a doctoral student at Assam University.

The conflict severely hampered the protection mechanisms in place in the park.

“The park protection in Bhuyapara and Panbari were nearly non-existent during and after until 2004-05 when it started picking up,” Ahmed said. “Panbari is still volatile but it is better than it was a decade back. With no protection, the park natural resources became open to fringe villagers and also to poachers or hunters, including small-scale hunters and subsistence bushmeat hunters. Other than direct killing all these led to human disturbance in a habitat forcing animals to move away.”

H.K. Sarma, another co-author of the study and field director of MNP, said it had been daunting for foresters to restore protections for the park.

“When protection in the Manas National Park was re-established around 2003-04 there was hardly any infrastructure in the Bhuyapara and Panbari range,” Sarma told Mongabay-India. “Due to the frequent attacks on camps by miscreants and killing of staff members, frontline staff were compelled to stay away from their camps [for] over one and half decades.”

The Panbari and Bhuyanpara ranges bore the brunt of the conflict, forcing the animals into the Bansbari range.

Sarma credits his predecessors who worked hard with the BTC and NGOs to progressively establish protection and motivate communities to come forward to conserve Manas.

Lauding the effort behind the study, Maan Barua, a cultural and environmental geographerfrom the University of Cambridge, who was not involved in the analysis, said the takeaway from Manas was that it was difficult to practice conservation outside of sociopolitics.

“The prevalence of biodiversity is often a political economic and political ecological question,”Barua told Mongabay-India. “Abundance is key and the long-term success of the Manas project will be reflected by whether the model in the future delivers social justice and allows for species, whose abundance has decreased, to come back. Efforts like this can only help the cause.”

On analyzing data from the camera traps, the researchers of the new study discovered that in the Bhuyapara and Bansbari ranges, which have been conflict-free since 2003, most species were spread out uniformly. In Panbari, where the conflict continued until 2016, they are either scant or are distributed far in the interiors, on the border of the RMNP.

The photographs also revealed that carnivores, such as tigers, are more mobile in Panbari and move frequently, so they are photographed more often.

“This means that there are fewer prey animals in Panbari due to the longer disturbance period and the carnivores are moving more and spending more energy to locate prey and hunt,” Ahmed said. “The long conflict has led to reduced number of prey animals in the Panbari range and has not yet built up their population in the range like Bansbari and Bhuyapara [which have been] relatively peaceful during the last one decade or more.”

Over the last few years, though, prey populations seem to have started building up in the Panbari range, except for large mammals like sambar, gaur and buffalo, which were mapped in significantly low numbers compared to other species, the authors said.

“This further indicates that while villagers were avoiding the Panbari range due to presence of armed militants and security forces operating around, large prey were still disturbed by presence of armed militants and security forces,” Ahmed said. “Often large mammals were reliable protein source for those camping deep inside the range having little or no access to supplies from outside, since their supply lines were severed by security forces. However, there was no direct evidence to this.”

A number of tigers photographed in the RMNP the year before the survey were spotted on camera at Panbari as well, indicating the animals had had the chance to explore new territories.

“Here RMNP acts as a refuge for many species and hence the diversity of the species known from Manas has not got lost and has remained intact,” Ahmed said.

Embarking on the survey proved challenging to the researchers because they did not have a dataset to compare the diversity and distribution of mammals from before the conflict.

Barua said camera trapping had much to contribute to understanding patterns of biodiversity, particularly in the case of mammals that are difficult to otherwise spot.

“The species assemblage recorded, particularly the clouded leopard, is of great interest,” Barua said.“The late Sanjay Debroy, a stalwart of Assam’s forest department and who was pivotal to conservation in Manas in the 1970s, was one of the few people who had seen this animal. The paper mentions a number of records from camera traps.”

Sarma, the MNP field director, said that once security in the Panbari range was enhanced, the population of different species should bounce back to optimum, as seen in the other ranges.

“It is time to act to improve management of the range to the maximum,” he said. “As the situation improved, animals that moved away from Panbari started to move back.”

However, it will take some time for the wildlife to adjust to the changing situation, Sarma added. Understanding the importance of the TRaMCA, park managers at both the MNP and the RMNP are working very closely with each other, he said.

Sarma said that exchanging information and intelligence, on poaching and hunting or other disturbances, was necessary to minimize negative impacts on both parks.

“Poachers were apprehended in Bhutan based on intelligence shared by us while bordering areas are jointly patrolled by staff of both the parks,” Sarma said. “The mechanism of transboundary collaboration that started some years back is now on ground and this is certainly helping the key threatened species in the entire landscape.”

Ahmed added: “As long as the protected forests are there in this landscape, 10 to 15 million people living in western Assam will continue to receive healthy ecological services for better life like water and soil nutrients.”

This story by Shreya Dasgupta was first published on Aug. 10, 2018, by Mongabay-India.