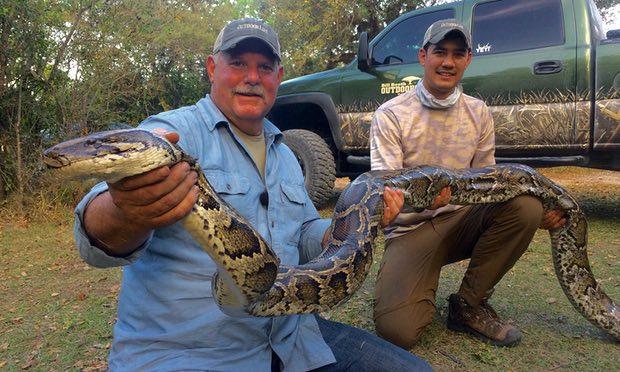 Bill Booth struggles to recall the last time he saw a raccoon, a fox or a rabbit on one of his frequent hunting excursions deep into the swamps of the Florida Everglades.

An outdoorsman all his life, he knows as well as anyone how the native wildlife once abundant across the vast wilderness has been all but wiped out by an invasion of a deadly species he is trying his hardest to remove: the Burmese python.

By some estimates, up to 150,000 of the unwelcome intruders are swimming through the state’s 1.5m acres (600,000 hectares) of waterways, reproducing uncontrollably and consuming almost every living creature in their path, sometimes taking on even the previously undisputed king of the Everglades, the American alligator.

It’s a growing problem that has led wildlife officials to conceive ever-more colourful attempts to try to eradicate, or at least contain, the giant snakes.

With varying success, efforts have included training dedicated sniffer dogs, bringing in snake hunters from India’s mountain-dwelling Irula tribe, and, most recently, advertising for minimum-wage civilian python-catchers on a two-month contract for a hunt beginning in April.

Booth, who takes his small crew on regular hunts into the most remote parts of the ecologically fragile wetlands, is at the forefront of another initiative. The Miami-born firefighter and his fellow “Cypress Boys” are the current champions of the Python Challenge, a month-long hunt devised by the Florida fish and wildlife conservation commission (FWC) in which members of the public are encouraged to venture into the Everglades, tracking and capturing as many snakes as they can.

But while Booth nabbed 33 of the 106 pythons landed in the 2016 challenge, including a 15-footer just 3ft short of the Florida record 18ft 8in snake landed in 2013, he acknowledges the tally had little to no impact on the wider problem.

“There’s no way humanly possible to go out there and catch them and get rid of them altogether,” he said. “It’s just too much of a vast area.

“There’s over a million acres out there, areas down in the national park that humans have hardly ever been to, areas that are off-limits, and you’ve got snakes everywhere. When I was a little kid, the Everglades was my backyard and I appreciated all the wildlife, but over the years these pythons have taken over and taken a toll on native wildlife. Now you barely see any other wildlife, there’s hardly any birds and you don’t see any raccoons. In four years of hunting pretty regularly down there, we might have seen a couple of river otters, but other than that there’s nothing there.”

From the figures, at least, there’s no shortage of would-be snake hunters willing to risk the dangers of tussling with one of nature’s most fearsome predators. More than 1,000 participants from 29 states contested last year’s challenge. Separately, a similar number applied for the 25 paid slots on next month’s hunt, the overwhelming response forcing an early close to the South Florida water management district’s application process.

“It’s a thrill, it really is,” Booth says of catching pythons. “You might go for days without seeing one, and when you do it’s unexplainable, you just get goosebumps. Most of the time we see ’em out sunning themselves.

“I was out with a magazine crew for four days and just couldn’t find a snake. We were just to the point of giving up and went to a tree island for lunch, I walked around and there it was, a 15-footer.”

Florida’s problem with pythons became apparent in about the middle of the last decade, when officials began to notice steep declines in the populations of native animals and birds. Anecdotally, the snakes first appeared in the 1980s, dumped by owners who could no longer care for their fast-growing exotic pets, or having escaped from an Everglades breeding facility destroyed by Hurricane Andrew in 1992.

Skip Snow, a retired biologist with the National Parks Service (NPS), joined forces with FWC, the US Geological Survey and university researchers to create a number of initiatives to try to limit their impact. So-called Judas snakes were released back into the wild with radio transmitters during mating season, designed to lead officials to females each carrying up to 100 eggs. But after some early successes, there were problems with batteries running out and other technological issues.

Snow was also credited with the introduction of Python Pete, an enthusiastic beagle puppy who spent several months in training with a captured serpent called Bob to be able to sniff out hiding snakes for a reward of fried liver.

Unfortunately, Pete was quickly retired when it became clear he couldn’t work for more than 15 minutes at a time in Florida’s scorching heat and humidity, but his trailblazing efforts continue with a joint venture between the NPS, University of Florida and a team from Auburn University’s dog detection team.

Two black labrador retrievers, Floyd and Vito, who were previously trained as bomb-sniffing dogs, found six pythons during a four-month project in the Florida Keys that wrapped up in February. “They are good at finding them when the snakes are right in front of them and we cannot see them, but there are challenges,” said Dr Christina Romagosa of UF’s department of wildlife and ecology, co-author of a startling 2012 study that found pythons had almost entirely wiped out native mammals in the Everglades, from marsh rats to bobcats and deer.

“It can be simple if the snake is just in front of you in weeds, but if they’re in a hole or in water, we as people are still challenged in finding them.”

The dogs were in Key Largo at the same time as the Indian tribesmen, brought in by FWC as a two-month experiment. They captured four pythons on an abandoned missile site that the labradors had detected but not found.

Tylan Dean, chief of the biological services branch of Everglades national park, believes such initiatives are unlikely to make much of a dent in the python population, but says all have some value as part of a “toolbox” of options and as educational vehicles.

“In terms of control, we still don’t have any method that I would call successful,” he said.

“I try to be optimistic because I don’t think we should give up on this wonderful ecosystem or the critters that are being affected – it’s worth continuing to try to improve. There’s always potential there’s something out there that will be revolutionary, that could be meaningful in our ability to control pythons or reduce their impact.”

This article was first published by The Guardian on 27 Mar 2017.

We need a Python Wasting Disease, and we need it fast.

Blimey, I didnt know it was that bad in the everglades,. I wasnt too keen on supporting this either, but, it has to be done,. good luck guys and dogs.

No animal predator is capable or has a self-defeating survival interest in wiping out more than 10% of it’s prey. Human-animal predators are the only species capable of that as seen witnessed throughout history & more so presently due to enormous human pop. increase. Granted pythons are newly human-introduced predator species but nature left on it’s own, banning human hunting in the Everglades, would eventually balance itself out with time.
If predators like Bill Booth were not allowed to hunt Everglades’ raccoon, fox & rabbits, they would never be wiped out be pythons.

It’s the big 8 footers or more that are the real problem. Anything less are likely to be predated upon and therefore eliminated before being able to do much harm.

That is precisely how nature’s biodiversity works w/ all life subsisting on other life with pythons being one more species existing as prey as well as predator. No mention has ever been given to what human hunters are allowed to do with the large pythons they’re being invited in to slaughter. Sell the skins? Leave the flesh as food for other Everglades species, or what?

I never thought I would support a hunt. I support this one.