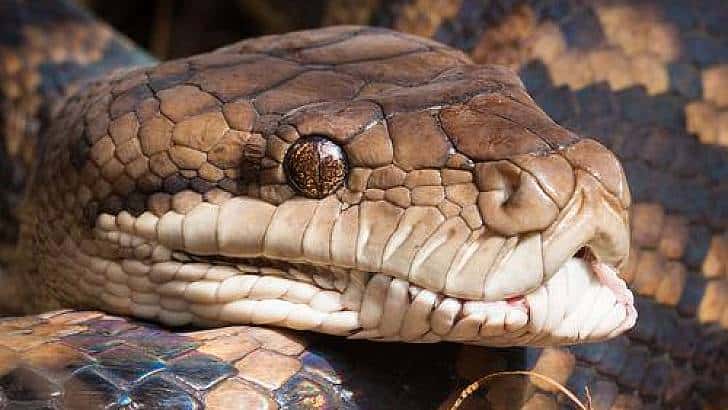 The reported killing of a woman in Indonesia by a large snake has raised questions about how human development is impacting both people and serpents.

Fifty-four-year-old Wa Tiba was checking on her home vegetable garden when she was believed to have been attacked by a 23-foot reticulated python.

Local news reports say a search effort was launched when Tiba didn’t return home. The snake was reportedly found nearby with a bloated stomach. When locals from Tiba’s town killed the snake and sliced it open, the woman was found dead, fully intact, and swallowed whole. Video of the deadly encounter has been making the rounds online.

The incident comes just over a year after a 25-year-old man was swallowed whole by a reticulated python, also in Indonesia.

Reticulated pythons are native to Indonesia and some have speculated that human development is giving python attacks a greater chance to occur. But more research is needed to say for sure, experts say.

“They stop the heart,” says Max Nickerson from the Florida Museum of Natural History. “It’s amazing how fast it happens.”

Nickerson has kept reticulated pythons as pets and says that, while each snake is different, the species is “touchy.” When they kill, they sink their large jaws into their victims and coil around them until blood flow stops.

Scott Boback, a vertebrate ecologist at Dickinson College in Carlisle, Pennsylvania, notes that the species is an ambush predator. Instead of seeking out prey, it lies in wait for its victims to walk by.

“An ambush predator like a reticulated python will use its tongue for chemosensation,” says Boback. “They’ll find areas in which a prey animal walked past back and forth. They detect those chemicals and might set up an ambush along that path.”

Reticulated python attacks are rare, which makes their gruesome outcomes all the more shocking. Typically, the snakes feed on mammals (up to the size of deer) and birds, but they’ve been seen eating more dangerous targets like alligators.

When the Indonesian man was killed last March, experts speculated that deforestation from the country’s palm oil industry might be making attacks more likely by killing the snake’s other prey and removing their natural habitat.

“The larger ones love to crawl and climb, and they get a lot of their food from the forests and the trees,” says Nickerson. By erasing their habitat, they may be forced to stay alive through alternative means.

It’s currently unclear, however, if the snake that attacked Tiba had experienced the same habitat disruption. And Boback notes that human conflict with snakes is nothing new.

“There’s a lengthy relationship we’ve had with large snakes over the course of our history,” he says. Studies have shown our brains may even be hardwired to detect and fear snakes, as an evolutionary form of protection.

One study published in 2011 showed that a group of people living in the Philippine jungles not only shared an evolutionary history with snakes, but also compete with them. One survey found that 26 percent of the village’s men had been attacked by pythons.

Additional research is needed to know if python attacks on people are really on the rise in Indonesia, or elsewhere. Boback notes that any change to their landscape may influence the reptiles’ behavior—but scientists are unsure to what extent pythons may adapt by targeting more human beings, or if recent reports have received more attention because of social media, the rapid proliferation of cameras, and rising news coverage.

This article was first published by National Geographic on 18 Jun 2018. Lead Image: June 16 (UPI) — A woman died after a 23-foot python swallowed her whole in Muna, an island in the southeast Sulawesi province of Indonesia.