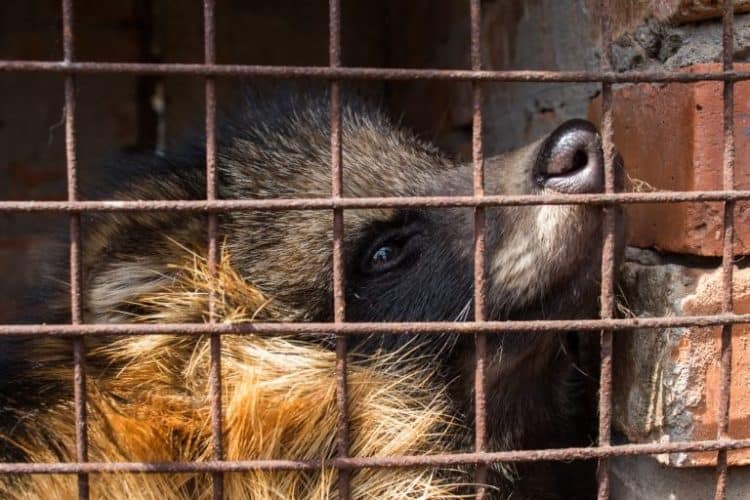 The Mirror reports that raccoon dogs at a Chinese fur farm were electrocuted incorrectly, enduring brutal pain and consciousness throughout the ordeal. Experts warn about the conditions on 13 fur farms in China that have similar dangerous conditions.

Campaigners from Humane Society International (HSI) filmed scenes at the largest fur-producing country in the world to bring awareness to the plight of raccoon dogs and other animals. Investigators filmed raccoon dogs being electrocuted with a double-spiked lance that results in them being conscious while experiencing a slow, brutal death.

Alastair MacMillan, HSI’s veterinary adviser, said in a statement: “The animals in this video are being subjected to violent and chaotic electrocution in the body and not in the brain, which means they are highly likely to have experienced several minutes of extreme physical pain and suffering, like heart attack symptoms. Instead of instant death, they are likely to have been immobilized by the electric shocks but remain conscious and feel the intense pain of electrocution,” he said.

Fur farms have been under intense scrutiny during the coronavirus pandemic as many European farms find mink infected with Covid and take steps to shut down farms.

The first infections on Dutch mink fur farms were found in April and the government used the opportunity to take a stance against the industry and call for closing all farms by March 2021. Over a million mink were killed during the pandemic.

In Denmark, the government decided to cull around 15 million mink “due to fears that a Covid-19 mutation moving from mink to humans could jeopardise future vaccines.” However, the cull was not completed due to a court order.

Sign this petition to ban fur farming in the European Union!