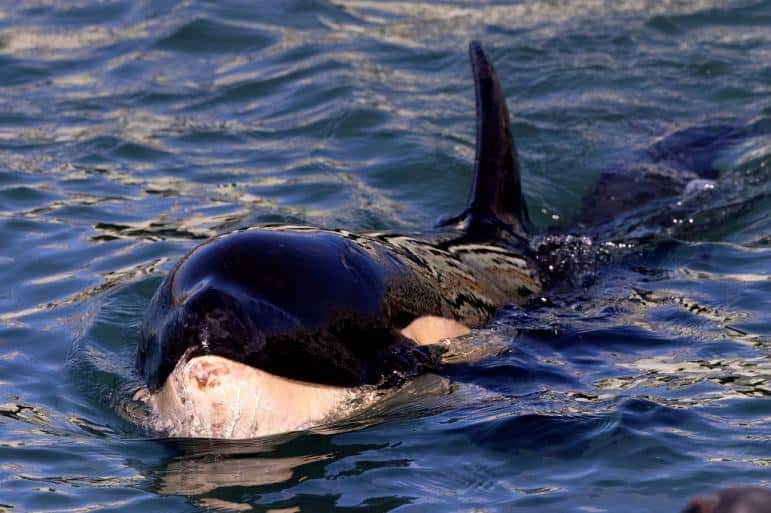 Wildlife rescuers in New Zealand were scrambling to keep a stranded baby orca alive Wednesday, as volunteers scoured waters off Wellington to find the calf’s mother.

The killer whale, a male aged four to six months, washed ashore on rocks just north of the capital on Sunday and was refloated by wildlife officers after distressed members of its family pod swam off, the Department of Conservation said.

Named Toa — Maori for ‘warrior’ — the 2.5 metre (eight foot) orca is unweaned and unable to survive alone in the ocean.

“We have to think about how we ensure we get him back to his mother because he needs help, certainly with the feeding.

“How do we locate his mother? That’s the second big challenge, which we’re now struggling with.”

Angus said an air and sea search was under way off Wellington for Toa’s pod and the public were encouraged to report any orca sightings.

Toa is being kept in a makeshift pen set up between two jetties at the seaside suburb of Plimmerton.

It is being fed via a tube every four hours and monitored around the clock by wetsuit-clad volunteers to ensure it does not beach itself again.

Angus was cautiously optimistic about the young whale’s future but said there were no facilities in New Zealand that could care for the animal long-term, making it imperative its mother be found as soon as possible.

“He’s been through quite a stressful experience but his health at the moment looks good,” Angus said.

“Orca are fairly robust animals and we’re managing to hydrate him and slowly get some feed into him, so there are good signs.”

Despite being known as killer whales, orcas are actually the largest species of dolphin, with males growing up to nine metres.

Recognisable by their distinctive black and white markings, they are listed as critically endangered in New Zealand, where their population is estimated at 150-200.

Pods of orcas are relatively common in Wellington Harbour, where they have been observed hunting stingrays.

This article was first published by IB Times on 14 July 2021. Lead Image: New Zealand rescuers are searching for the mother of a stranded baby killer whale Photo: AFP / Marty Melville.