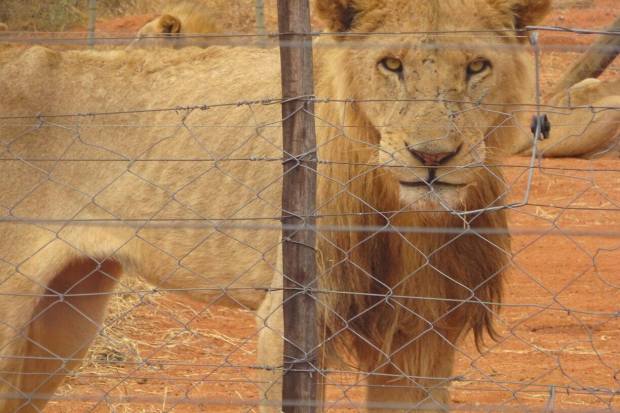 EMACIATED lions broke free from cages at a game reserve which breeds animals to be shot by wealthy trophy hunters.

Cops took two days to track and capture seven big cats – five males and two females – after they were spotted scouring for food in local villages.

They say they had earlier escaped from Ingogo Safaris park in Limpopo province, South Africa, where more than 70 big cats – including tigers – were held captive.

He has repeatedly been investigated over allegations he keeps the animals in squalid conditions.

Slippers reportedly has 72 lions on his farm where he is said to feed them a giraffe every two to three weeks.

The shocking case highlights a lack of monitoring of the highly-controversial captive lion industry, say campaigners.

Douglas Wolhuter, from the National Society for the Prevention of Cruelty to Animals (NSPCA), said Slippers should never have been given a permit to keep big cats in the first place.

“Not only was the fencing wholly inadequate but the welfare of these animals has consistently been compromised,” he said.

NSPCA officials carried out an inspection at the properties just last month where Wolhuter said they found “deplorable conditions” and “underweight lions” in “unhygienic and small enclosures”.

On Facebook Slippers denied there was any truth in the reports.

“The media will say any thing to sell a story, there is no truth in this,” he wrote. “Lions are back in their camp and safe.”

Animal welfare group, Four Paws, is one of the organisations working to put an end to the captive lion industry.

They even have their own sanctuary called Lions Rock which is dedicated to rescuing abused lions and other big cats.

There are around 260 farms across South Africa that breed lions purely to satisfy the desires of wealthy hunters.

And every year, thousands of tourists travel to the region just to kill exotic animals and take home their carcass as a trophy.

Lead Image Source: An emaciated lion with with jutting ribs seen at Ingogo Safaris park – Credit: Facebook. This article was first published by The Sun on 15 May 2020.