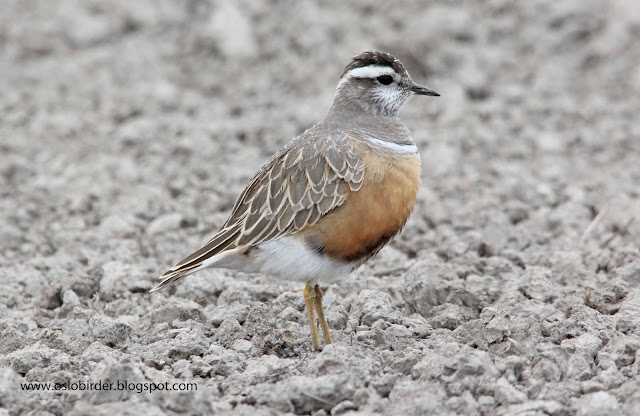 As Hannibal Smith was prone to say: I love it when a plan comes together. We haven’t had rain for over a week and none is forecast for the coming week either but overcast skies and the chance of showers this morning got me excited. Rain in May brings down migrants and especially waders and there was one wader I was really hoping for: Dotterel. This species is a not uncommon breeder in the Norwegian mountains but is very scarcely seen on spring migration and hardly ever seen on autumn migration. The places where it is seen on spring migration are often traditional sites so it can pay to check places where the species has been recorded before. Dotterel is recorded less than annually in Oslo and Akershus (and I haven’t seen one) but looking at the records there are two locations that have had enough records to suggest they are traditional sites that are probably used annually (observer coverage is far too low to record them if they only stop for a day or two each year). My usual route into Aurskog-Høland takes me to both these sites and this was where I was going today.

I normally head straight out to the furthest point and then bird my way back but today as I drove past Merkja I saw there were quite a few waders. Before 0530 I was watching Ruff, my first Dunlin of the year and a male Garganey amongst others. I then thought I had to check out Svellet as I knew that the weather would improve by the afternoon and that the water levels are rising fast (42 cm the last 3 days and 21cm since yesterday). There was still mud showing but hardly any birds (less than 50 waders in total but too distant to make out what they were, although on my way home I did see them better). The areas that are now available for feeding were bone dry yesterday and there clearly is no food yet. So the party is over just as it was getting interesting but there is probably still a couple more days where something could turn up and Merkja still looks good.

My first stop in Aurskog-Høland was Haneborg – one of the sites that has held Dotterel before. I did find plovers but the 7 Ringed Plover resting on a bare field were possibly even more unlikely than Dotterel here and a sign that the rain was having the desired results. By now it was really cold, the wind has turned to the north and was quite strong which highlighted how underdressed I was – I actually started shivering!

The flooded field at Kjelle held a few waders including 3 male Ruff (Merkja had held 15 females and just one male) and I then headed for Hellesjøvannet. I checked quite a few bare fields along the way but it was when I approached Hellesjøvannet that I was heading into the second historic site. I stopped the car, scanned and had a huge adrenalin rush – Dotterel!!! I initially saw just one bird but drove closer and there were 5 and they were very close to road. I was really able to fill my boots with them whilst staying warm in the comfort of the car and not disturbing them. I took far too many pictures with both cameras (allowing me to really compare the two) plus a load of video. I’ll have to come back later with a proper comparison of the two cameras but my first conclusion is that whilst the view finder of the bazooka is much better and you feel you are taking a better picture that the end result is better from the superzoom. I was also able to compare them in poor light at Merkja and here the bazooka probably performed better but I’ll come back to this in a later blog post.

Of the five Dotterel there were two obvious dowdier birds which were males but there were also clear differences between the brighter birds than left me unsure as to whether I was seeing a bright male alongside a female or two females with one perhaps being a 2cy bird.

The Marsh Harrier were again present with a pair displaying and a lone male hunting and looking forlorn.

Maridalen in the afternoon held no Dotterel (there is one historic record) but did have Whimbrel, Greenshank and Wood Sand so the weather had an impact here too.