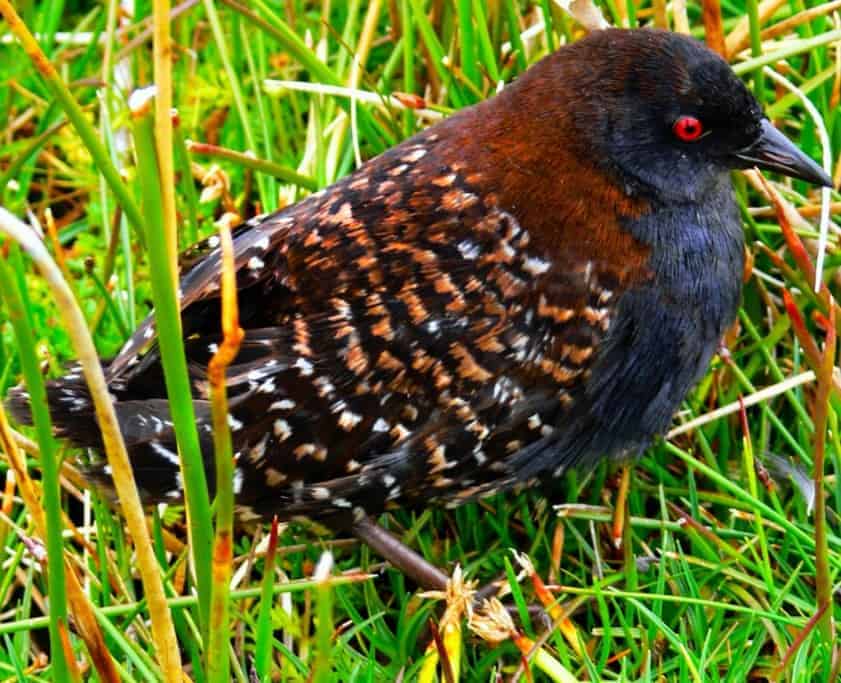 An extremely rare and incredibly reclusive bird—the Junin Rail—was seen and photographed near a high Andean Lake this past Sunday, February 26, 2012.

“More people have climbed Everest and visited space than have seen this amazing creature. For me, this event was equivalent in ornithological terms to finding the Holy Grail. Frankly, I never expected to see this bird in my lifetime, let alone photograph it. This gives us real hope that this endangered species can continue to survive,” said Mike Parr, Vice President of American Bird Conservancy (ABC).

The Junin Rail is notable for its bright red eyes and cryptically-patterned plumage. It relies on hiding motionless in dense reeds to avoid predators and so can be very difficult to see, even at close quarters. It is similar to the North American Black Rail (with which it is sometimes considered conspecific), but has a different call and subtly different plumage characters. The Black Rail itself is often considered North America’s most difficult bird to find.

The bird was found by Cesar Donato Zevallos Bashualdo a conservationist who works with the Peruvian conservation group ECOAN, then hand-captured by leading British ornithologist and bird bander Stephen Rumsey. It was photographed by ABC’s Mike Parr. The ECOAN/ABC team is working in the Junin region to develop a conservation program with local community members.

The bird was first attracted using a tape playback of its call by the ECOAN team, then isolated in a small patch of reeds and very carefully captured by hand, before being photographed and released unharmed back to its marshland habitat just minutes later. Other participating members of ECOAN who witnessed the event were Alan Chamorro, and ECOAN President, Constantino Aucca Chutas.

The rail is classified as Endangered and occurs only in the dense marsh grasses surrounding Lake Junin at an altitude of 13,500 feet in the Peruvian Andes. The lake also provides habitat for another Critically Endangered bird endemic to the area—the Junin Grebe.

Populations of both the grebe and rail are threatened by the cutting and burning of reeds to create grazing areas for cattle; pollution from metal mining run-off; and the operation of a hydroelectric dam, which can cause water levels to fluctuate.

Invasive trout are also likely reducing populations of native fish upon which the grebes feed. Despite the threats, the lake is still a spectacular place that hosts globally important populations of wintering migratory shorebirds that nest in North America such as Pectoral and Baird’s Sandpipers, Wilson’s Phalaropes, Lesser Yellowlegs, and American Golden-Plovers.

The lake also provides nesting habitat for Chilean Flamingoes and provides foraging opportunities for thousands of waterbirds. Another Endangered species, the Lake Junin Giant Frog, can also be found there. The lake has been has been classified as a Wetland of International Importance under the Ramsar Convention, and conservation efforts there urgently need additional support.