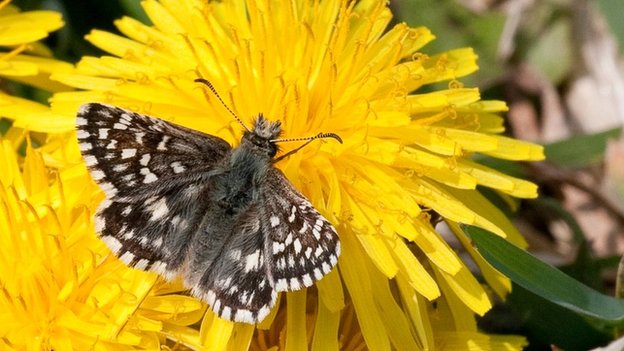 Record-breaking temperatures and dry weather in spring last year led to an increase in the numbers of many species of rare butterfly, a study suggests. The UK Centre for Ecology and Hydrology and charity Butterfly Conservation said the weather had provided perfect conditions for “spring specialists”.

Their study was based on assessments of over 1,000 UK butterfly habitat sites. Species that did particularly well included the Duke of Burgundy butterfly – listed as threatened in the UK. Long-term, this species has declined by more than 40% in the last 30 years. It found that the species bucked that declining trend between 2010 and 2011, increasing in numbers by 65%.

Spring butterflies fared particularly well: numbers of grizzled skipper rose by 96% and the pearl-bordered fritillary population leapt by 103%. The much colder weather in the summer was, however, very bad news for more familiar garden species, including the peacock, small tortoiseshell and common blue. The populations of all three of these species fell significantly.

Marc Botham from the Centre for Ecology and Hydrology stressed that it was “important to look beyond the short term boost that last year’s weather provided”. “In the long term [many rare species] are still declining,” he told BBC Nature. “What’s important is to have good conservation in place, so that when the weather is good, the habitat’s there to allow these species to benefit.”

He pointed out that such targeted conservation – actively managing and improving butterfly habitat – had resurrected some species. “The heath fritillary was deemed the next species to become extinct [in Britain],” he said. Work to preserve the coppiced woodland this species needs in the South East of England has meant that in one particular woodland the species is now “thriving”.

Dr Tom Brereton, head of monitoring at Butterfly Conservation, said that many butterflies relied on “old-fashioned landscapes” that were declining in the UK. “We have 58 species in Britain and about 30 of them are restricted to semi-natural habitats,” he said, “Ancient woodlands, heathland, sand dunes or marshland – they’re all habitats where there hasn’t been any agriculture or development. “Targeted conservation [of these habitats] will be the only thing that helps them.”