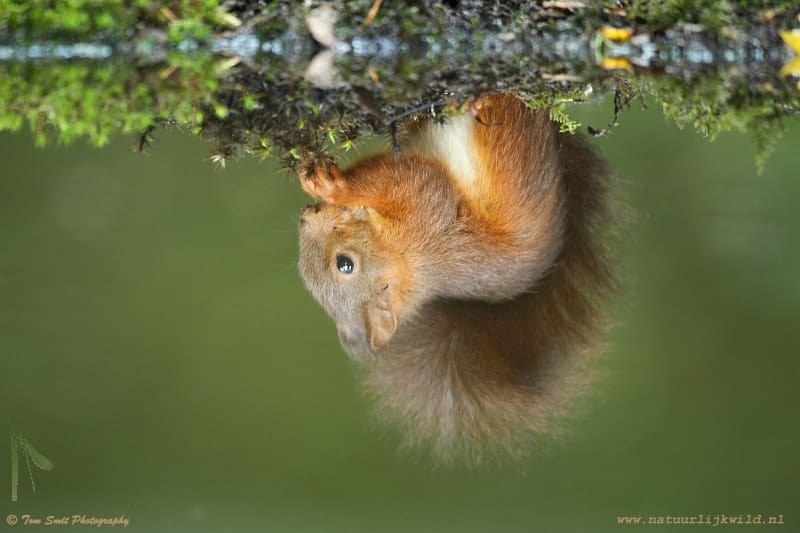 As this is my first post on this site I’ll introduce my self. My name is Tom Smit and I live in the Netherlands near the German border.

I’m an IT-speciliast and a side-job photographer mainly as nature- and wildlife. Sometimes also doing something else like sports, products or a wedding.

Last year I also had the oppertunity to show some of my pictures in my own exposition on several places in the Netherlands.

I like to do macro best, but al other animals are also favorite, or even some landscapes or panoramas. 🙂

In this first post I would like to show some pictures of red squirrels I had the oppertunity to take photographs from a photoshelter of one of our clubmembers Han Bouwmeester. He is professional photographer and build some photohides which are for rent for a day. I’ve been there some time ago for the first time and mainly shot birds. The last time I’ve been there (in an other hide) these red squirrels are the main actors of the day beside a lot of birds (like Black Tit, Blue Tit, Great Spotted Woodpecker, Dunnock, Eurasian Wren and sometimes even an Northern Goshawk).

Some people call them the clowns of the wood but I think the acrobats of the wood is a better name for them. They climb into trees, jump over from one tree to the next without any problem. I like to see them busy. And when they are busy I try to photograph them. In this blog you’ll find some of the pictures I took that day of them. I’ve been there for 5 hours and shoot over 1000 pictures of these acrobats and also the birds that show up.

Hope you like the pictures and hope this kind of blogs is what you like to see over here. I have also my own blog but that is a Dutch-blog. But the pictures shown there are “international”. So you can have a look.
Thanks for looking and I hope to post my next blog soon.

I live in the Netherlands near the German border. I'm working at a IT company in the Netherlands and in my rare sparetime a like to photograph. Mostly Nature and Wildlife, but also landscape. Beside I do some sports- and weddingshoots. Like to do macro the best, because it shows you things you could not imagine that it exists.I also have a weblog (Dutch, but pictures say more then words) on: http://natuurlijkwild.blogspot.nl/

I live in the Netherlands near the German border. I'm working at a IT company in the Netherlands and in my rare sparetime a like to photograph. Mostly Nature and Wildlife, but also landscape. Beside I do some sports- and weddingshoots. Like to do macro the best, because it shows you things you could not imagine that it exists.I also have a weblog (Dutch, but pictures say more then words) on : http://natuurlijkwild.blogspot.nl/Kind regards Tom Smit www.natuurlijkwil.nl

Someone on my WordPress website told me that there are no squirrels in the netherlands, but your gorgeous photos has proved them wrong. 🙂

Hi there. Congrats Tom, on your amazing pictures of a Red squirrel. I live in Toronto, Canada, and earlier this year, my wife, Jean, and I were in Ireland where we came upon a Red Squirrel. To us, they actually look somewhat like our American Red squirrels, but boy, do your Red squirrels ever have long ears! We were shocked to learn that U.K. and Irish Red squirrels are contracting the pox virus from Grey squirrels, and dying. We have far to many Grey squirrels here at our bird feeders in Toronto. But up north near Algonquin Park we have… Read more »

Hi Jean and Bob, Thanks. Luckely the grey squirrel did not appear in my country as far as I know. Two years ago I was in Scotland for a Pipebandcontest of my daughters Pipeband and I saw there my first grey one. People told my that grey squirrel has displaced the red squirrel on a lot of places. I looked on your website and noticed you have been in Amsterdam on Queens Day and you even have a picture of our queen. I haven’t seen here in whole my live as a real person. Only on TV. I also noticed… Read more »

Nice, Tom! I still need to do my first post!

Thanks Douglas. I’m curious what your first blog would be.

Tom, welcome to our blog – these are certainly the kind of wildlife images we want to see on our blog – congratulations on an outstanding study of the Red Squirrel – looking forward to learning more about the wildlife in Holland.

Hi Ken, Thanks. I’ll hope I do have time to post a blog also in English sometimes. As you’re using Syndicator it will go automatically but in Dutch. I’ll hope that my blog will give you some impression of the Dutch Wildlife. And off course I’ll like to go to Africa sometime, but I’m also very happy with our local nature. There are so many nice places and animals to see and make pictures of. Because I’ll do have my Dutch blog for a longer time you can have a look at it for the older articles. And you do… Read more »