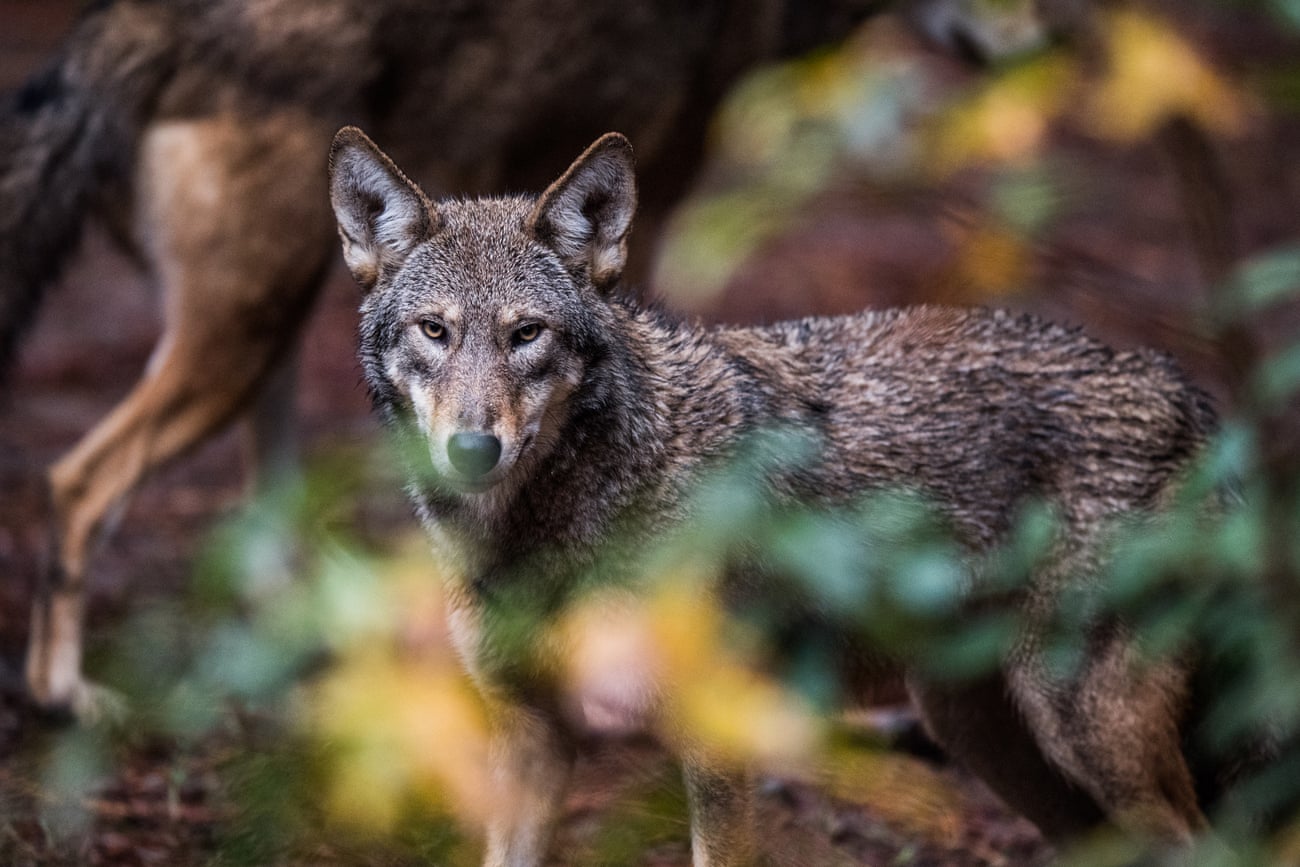 Attempting to locate one of the rarest animals on the planet, US government scientist Joe Madison pointed an antiquated VHF tracking antenna at a tangle of thick vegetation and twiddled some dials on the receiver. A red wolf, judging by the beeps, was in the vicinity but well-hidden.

“Did you hear that beep? That’s a six-year-old male we just heard,” said Madison, a Tennessean with a sandy-coloured beard who is manager of the US Fish and Wildlife Service’s (FWS) red wolf program. “I mean, obviously I don’t see anything.”

Sightings of red wolves are uncommon not only due to their elusive nature but also their plummeting population. Only around 30 of the creatures remain in the wild, in a corner of North Carolina, with 18 of them fitted with radio collars that Madison attempts to pick up with his antenna.

An FWS assessment in 2016 warned this vestige could completely vanish within eight years. The scenario now is even grimmer. “We’re already way ahead of where that projection was,” Madison said. “If we stay on the current trajectory it won’t be that long before we lose the population. In fact, we are down to one known breeding pair.”

Faced with hardening opposition to the wolves’ presence from some nearby landowners, the FWS has gradually pulled back. Wild releases of captive pups have stopped, as has the sterilization of encroaching coyotes to avoid hybridization.

In June, the Trump administration unveiled a plan, several years in the making, that would scale the red wolves’ protected area back to its federally owned core and allow people to shoot the species without repercussions on private land. Conservation groups argue this plan will swiftly snuff out the red wolf and have taken the fight to the courts.

“The impression we’ve gotten is that Fish and Wildlife have got tired of trying to save controversial species like wolves,” said Dr Ron Sutherland, an ecologist and red wolf expert at the Wildlands Network. “They don’t have the budget or the backing of Congress. It’s easier to let the wolves decline to the point where they can just pull the plug and we’re very nearly at that point. This wasn’t a thing started by Trump but Trump could certainly finish it off.”

Madison disputes the notion that he and his colleagues are allowing the red wolf to slide to extinction. “We have in no way, shape or form given up and we fight on a daily basis to do everything we can to retain this population,” he said. “None of us are here to oversee this population blinking out. But it’s gonna be a struggle.”

Tens of thousands of red wolves once lived in a sweeping expanse from Texas to New York until the arrival of European settlers saw them branded a pest, with a bounty placed upon them leading to mass slaughter. It appeared the species would go the way of passenger pigeons and eastern cougars – blasted haphazardly by guns until there was nothing left to shoot – before a novel rescue plan was hatched in the 1980s.

About 400 wolves were rounded up by the FWS in Louisiana and Texas, with 14 determined to be pure red wolves. With a rangy, loping stride, the red – or tawny wolf, which is actually tawny to rusty colored, is typically smaller and more circumspect than its western grey cousin.

They’ve got long skinny legs, in winter they have these beautiful fluffy coats. And they howl

“They’ve got long skinny legs, in winter they have these beautiful fluffy coats. And they howl,” said Sutherland, who has taken his son out to hear the vocalizations. “It’s a beautiful, haunting sound and it sort of sends chills up your spine. They are just pretty amazing animals.”

It was decided to place this cadre of surviving red wolves on land found in the jutting jaw of eastern North Carolina, centered on the Alligator River national wildlife refuge.

Despite being declared extinct in the wild in 1980, the red wolf was given a second life as what’s known as a non-essential experimental population. Protected by the Endangered Species Act, the red wolves initially did well, with an accompanying captive breeding program allowing 42 wolves in total to be released by 1992.

Straining at the confines of their habitat, the growing population was subsequently granted more space to roam, ostensibly safe from human harm. A total of five North Carolina counties, spanning 1.7m acres, are now counted as red wolf country. This area includes federal, state and private land – a development that has enraged some landowners.

Red wolves are routinely killed in car collisions or disease but the leading cause of deaths is now gunfire. From a peak of 151 animals in 2005, the population has slumped to a fifth of this number.

Gunshot deaths “went through the roof” after North Carolina switched to a Republican governor in 2012 and allowed the nighttime killing of coyotes, Sutherland said. Even with night vision goggles, it can be hard to differentiate a coyote and red wolf when taking aim.

While it’s illegal to kill a red wolf unless it is attacking a person or property, no one has yet been successfully prosecuted for any of the scores of deaths.

“We were concerned as landowners that something has been put on our property we didn’t ask for, we didn’t want,” said Wilson Daughtry, a farmer and contractor who owns land within the red wolf zone. “They said: ‘Oh, don’t worry about that. They’re experimental, they’ll never be a problem.’ Bullshit. No, I won’t miss them.

“For me, it is more about infringement on private property rights. I’m really irritated about that. Coming out here and stuffing those wolves down our throats, you’re not gonna get any support like that.”

Coming out here and stuffing those wolves down our throats, you’re not gonna get any support like that

Daughtry was lounging on a chair on an unusually warm February afternoon, pausing from his toil to install a pump at a remote property beside Alligator Lake, which is within the red wolves’ five counties. He wore a paint-flecked shirt, camouflaged cap and kneepads.

Landowners like Daughtry blame the red wolf’s presence for a constellation of present or potential ills, such as falling property prices, the inability to harvest crops if denning wolfs are in the way and disruptions to the deer hunting season due to the quarry being spooked by a threat that bears teeth rather than arms. Some even question if the red wolf qualifies as its own species, rather than a mix between grey wolves and coyotes.

“You ask 10 people in this county what the problem is and you’ll get 10 different answers,” Daughtry said. His wife has seen cats being ravaged by wolves, while Daughtry himself said he was menaced by a wolf while he was planting corn early in the morning around five years ago.

“That wolf became aggressive to my dog and I came to realize I was gonna have to kill that wolf somehow,” he said. Unfortunately for Daughtry he only had a potato rake and a wrench at hand so he hauled his dog up on to his tractor and waited half an hour for the wolf to eventually retreat. “They’re not scared of me,” he said. “Those things aren’t scared of humans.”

According to the FWS, there have been no recorded attacks by red wolves on humans since the North Carolina experiment started in 1987. During this period, there have been seven documented predations by wolves on livestock, mostly goats and chickens.

“It’s amazing that people are just so worked up about them,” said Sutherland, pointing out that deer populations actually peaked during the wolf’s zenith in the mid-2000s, highlighting the red wolves’ role as a key part of a healthy ecosystem. “You have all these bears spread out in North Carolina and they have a different mythology behind them, the sort of teddy bear mystique, whereas wolves are deeply ingrained as this thing you need to get rid of.”

The crucible for the red wolf’s looming demise is largely made up of vast fields of soy, corn and cotton. The flat farmland is occasionally punctuated by grain silos, chicken coops and wood-sided houses, many of them tumbledown and wreathed in vines. A few cows chew on tufts of ruddy-coloured grass.

If we lose them, we lose an opportunity to show we are better. As humans, we can do better

In this setting it’s not hard to imagine the red wolf as an icon, a storied survivor of human expansion..

Instead, the last few red wolves on Earth will one day probably be found in one of the 42 captive breeding facilities dotted around the US.

“You don’t really look at people and say: ‘Wow you look majestic as you stroll down the street.’ But look at them,” said Sherry Samuels, eyeing four wolves pad up and down their landscaped enclosure, eyes flitting in our direction.

Samuels is animal department director at the Museum of Life & Science in Raleigh, North Carolina, a venue that funnels through around 500,000 visitors a year to see its red wolves, bears and other attractions. This and other facilities try to keep the wolves’ gene pool from drying up.

“It’s just an impressive thing to watch them, how they care for each other and how they each have their role,” Samuels said, watching the wolf family in awe. “If we lose them, we lose an opportunity to show we are better. As humans, we can do better.”

This article was first published by The Guardian on 07 Mar 2019.

A world without wolves, isn’t

Good luck is all I can say. They’re gonna need it!