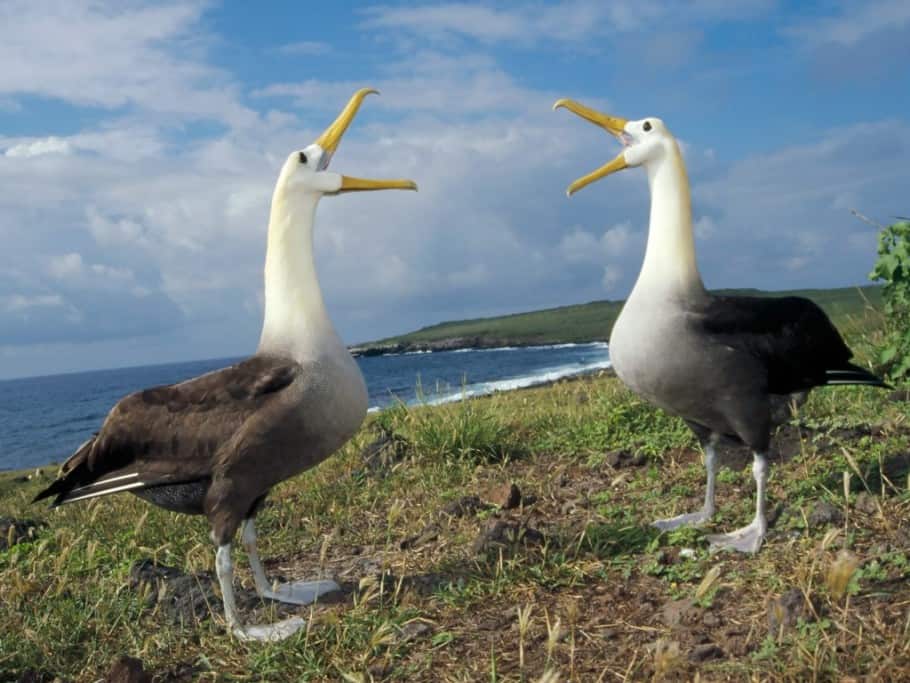 American Bird Conservancy (ABC), the leading U.S. bird conservation organization, and Ecuadorian Partner Equilibrio Azul have developed a new technology that will dramatically reduce seabird bycatch in the Ecuadorian hake fleet. The hake fishery and associated bycatch is one of the most significant threats to the Critically Endangered Waved Albatross.

The new technology, called the Medina System, represents a major breakthrough in seabird bycatch mitigation in small-vessel bottom-set longline fisheries. Bycatch occurs when the fishing lines are being set behind the fishing boats or being pulled in and albatrosses and other seabirds grab the bait and become impaled on the barbed hooks, either in their bills, bodies, or wings. Dragged under the surface, the birds are unable to free themselves and drown. Others are still alive as the line is hauled, but often injured or maimed when they are set free. With demand for ocean fish at an all-time high, hundreds of thousands of albatrosses and other seabirds are killed in this way each year.

“This new technology is inexpensive, effective, and acceptable to the local, small-scale fishermen. It reduces interactions with seabirds during line setting by allowing the bait to sink rapidly, but doesn’t add so much weight that the fishermen have trouble hauling the line back on board,” said Dr. Jessica Hardesty Norris, ABC Seabird Program Director.

ABC partners Jodie and Roberto Medina of Equilibrio Azul have worked with the Ecuadorian Ministry of the Environment, international fisheries conservation expert Nigel Brothers in association with Humane Society International (Australia) and local Ecuadorian fishermen to develop the technology. Since 2008, the team has been joining fishermen as observers on their boats to document the number of Waved Albatrosses dying in this fishery. This data is the first of its kind in the country. In 2010 and 2011, they ran experiments and conducted a series of workshops with fishermen to develop best practices to reduce albatross mortality in the fishery. This work consists of four strategies: 1) improving line setting methods to reduce the time the bait is near the surface; 2) improving the haul method by using a plastic pipe over the gunnel to protect the line and improve leverage; 3) improving offal discharge management to reduce the attraction of seabirds; and 4) educating and providing materials on safe release techniques.

Based on those experiments and observations, the team learned that approximately 50% of the seabirds were being caught during the line setting, and 50% during the haul. Further, the poor practice of throwing bait off the side of the boat increased the number of birds attracted to the lines. The team also observed that some birds were unnecessarily killed due to lack of knowledge on how to safely handle the birds and remove the hooks.

Other seabirds that will likely experience reduced bycatch mortality from the new technology and outreach efforts could include Blue-footed Boobies, Shy Albatrosses, Buller’s Albatrosses, and the endangered Pink-footed Shearwaters and Parkinson’s Petrels.

Hake are bottom-dwelling fish that occur at the edge of the continental shelf waters. The fishery is dominated by small vessels in relatively concentrated fishing areas, where up to ten vessels may be in sight of each other, each setting weighted lines of roughly 400 hooks. The Ecuadorian fishermen usually fish through daylight hours, making 3-5 fishing sets per trip. Both the set and haul are attractive to albatrosses and other seabirds, which sometimes attack baited hooks as they enter the water, and sometimes attack the hake themselves as they are hauled in, or take used bait as it is discarded. The process of hauling hake gear is complicated by the fact that the swim bladders of bottom-dwelling fish swell as they are lifted through the water column, which in turn lifts the weighted gear and causes it to float on the surface at great distances from the boat. Incidences of bird bycatch are troubling to fishermen, because they are either losing bait—or their catch—to the birds.

Working with our partners, Australian seabird bycatch expert Nigel Brothers, and the fishermen, the team developed the “Medina” setting system, tailored specifically for the Ecuadorian hake fishery. Instead of tossing the hooks into the sea one-by-one, the Medina system allows hooks to slide off of small metal bars, using the speed of the boat to pull the hooks. This new system reduces the set time by 80% – from about 20 minutes to less than four – and allows the captains to maintain the speed of the boat and therefore tension on the line, which further reduces the float time of the baited hooks. The system is embraced by local fishermen because it is inexpensive, saves bait, is easy to use, and is manufactured locally. Involving the fishermen directly in the development of the setting system proved a significant impetus in getting them to use it. Currently, the Medina system is being used in at-sea trials, and efforts are now underway with Ecuador’s Ministry of the Environment and the National Fisheries Institute to conclude the formal evaluation.

“Each of ABC’s best practices recommendations for bycatch reduction is the result of adapting or adopting suggestions developed alongside or by the fishermen. Notably, the whole effort would not have been possible without the gracious support of the Packard Foundation,” Hardesty Norris said.