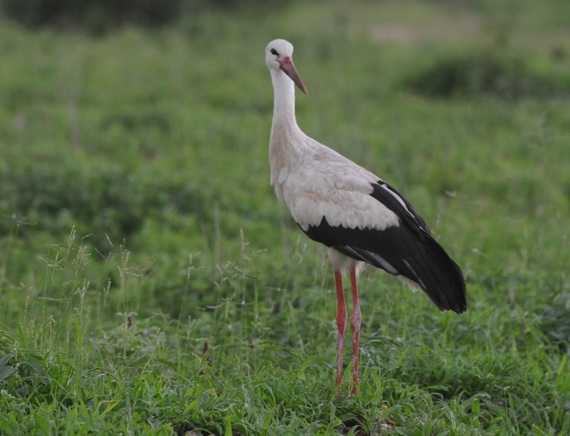 Aristotle was a brilliant philosopher and observer of nature. He pioneered the study of zoology, but he was utterly clueless about bird migration. The seasonal appearance and disappearance of the birds in his native Greece perplexed him. Similar appearing species must be “transmuted” into each other across seasons, he reasoned, to explain the disappearance of Redstarts each winter when European Robins suddenly arrived. Summer’s swallows and storks, which were not replaced by similar species, were thought to hibernate in mud or tree cavities.

In the early 1800s, a White Stork arrived in Germany with a long spear impaled through its neck. The spear was from Central Africa. Rather than flying to the moon, as some thought, the White Stork must have been in Africa for the winter. A worldly view of migratory birds was coming to the fore.

Around the same time, John James Audubon tied some silver string around individual legs of Eastern Wood-Pewees (flycatchers) in order to see if the same birds returned to his Mill Grove, Pennsylvania home the following spring. They did, and with that Audubon launched the study of bird banding that has been central to understanding migratory birds ever since. Migratory birds are faithful to place.

We are now amid a bona fide renaissance in understanding the nature of bird migrations. New tracking technologies, particularly smaller and smaller satellite transmitters – and more recently, Geolocators (which combine light-level loggers with a GPS unit in one tiny package) – have been applied to migrating birds and revealed with great detail their complex geographic movements.

My decade-long experience with Arctic Alaska summers afforded me great exposure to the world of migratory birdsas migrants from all continents and oceans came to breed in the immense coastal plain wetlands and tundra.

We are learning of the unbelievable distances birds travel in migration. Arctic Terns travel between the Arctic and Antarctic in a sinuous path such that they cover some 27,000 miles in a year. We have learned that Bar-tailed Godwits fly in one continuous flight from Alaska to Australia or New Zealand across the Pacific.

Through satellite tracking, it is now possible to see how a Whimbrel flies around a tropical storm on its southward migration from Arctic Canada en route to the Caribbean.

Small birds are also revealed to fly tremendous distances. The Northern Wheatear, a small songbird weighing less than an ounce, flies some 9,000 miles from its Alaska mountain breeding grounds to East Africa.

Yet these long distance movements that migratory birds undertake often puts them in harm’s way. Note that the speared stork in Germany, Audubon’s pewee in Pennsylvania, and the tropical storm-dodging Whimbrel arriving on the island of Guadeloupe in the Caribbean were all shot and killed for their trouble.

These are sad examples of a larger story – that of our migratory birds in decline. Hunting is only one of the issues. Loss of habitat, climate change, and pesticides and other poisons are all challenges to migratory birds.

We are now acquiring critical information on the geographic areas that need our conservation attention. New technologies are allowing us to connect specific populations of concern with their breeding grounds and their wintering areas, as well as their critical “staging areas” in between.

The migration maps are getting explicit: The “where” of conservation action for bird migration is in front of us; the “how” is much more challenging.

The long migrations of migratory birds cross a myriad of cultural and political boundaries. The northern world has much more capacity and resources for conservation than countries in lower latitudes and the tropics. The challenge is to build truly collaborative and mutually interested relationships that transcend such cultural and political boundaries.

With my WCS colleague Joel Berger and others, I have worked with our National Park Service (NPS) to conceptualize and help initiate a new Migration Program. Those efforts helped me and my colleague Kevin Ellison (now with World Wildlife Fund) initiate a look at Great Plains birds that migrate across North American grasslands into Mexico and Canada.

The collaboration with NPS is as important symbolically as it is on its merits because they historically created the idea of protected areas for wildlife conservation that the rest of the world has followed, including non-governmental organizations like ours. The NPS is now on a path to understand how best to conserve migratory birds outside their jurisdictional boundaries.

We have come a long ways from Aristotle in knowing, but we are trying to move from clueless to effective on conserving the fascinating phenomenon of bird migrants filling the northern skies and forests around us each spring.