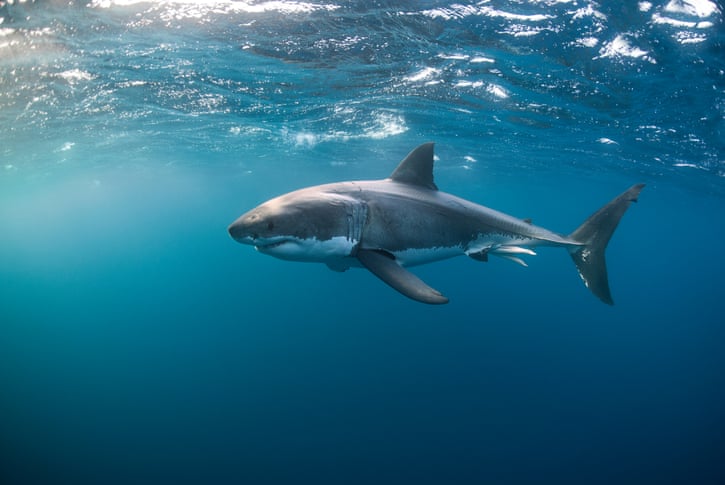 It has been described as the “holy grail” of marine biology, an act that is crucial to the survival of apex predators but has never been documented in detail: the mating of great white sharks.

Despite decades of research into the habits of the white pointer, how and where the marine creatures mate has largely remained a mystery. Until now.

The testimony of a fisherman working in the frigid waters of the Otago Peninsula on the east coast of New Zealand’s South Island has shed light on great white sex in astonishing detail.

Dick Ledgerwood’s account is only the second of its kind in the world. It took 23 years, a cup of tea and the help of marine biologist Steve Crawford for it to surface.

“Witnessing white pointer copulation is informally referred to among scholars as the ‘holy grail’ of white shark ecology,” Crawford, a marine biologist from the University of Guelph in Canada, told the Guardian.

Crawford first got wind of Ledgerwood’s tale from wharfies at Port Chalmers while he was in New Zealand studying shark behaviour in 2016. He tracked Ledgerwood down, interviewed him at his home in Dunedin, and went out on the water with him.

Ledgerwood’s story, published for the first time by the Guardian, is the fullest account recorded of the mysterious white pointer mating rituals.

‘Revolving round and round, very, very slowly’

Ledgerwood is now 86, but in 1997, he was fishing each day on the Otago harbour.

He started, aged 15, and headed out to sea for 43 years, mostly hunting crayfish and sole.

He would spend days at sea, fishing “until the freezer was full up”, before heading back to Port Chalmers where the catch would be processed. In his decades on the water, he estimates he saw 12 or 14 white pointers up close.

Most of the sightings were at Taiaroa Head, where the sharks would feed on offal discarded from a fish-processing factory nearby.

“On a really calm day, they were just cruising around – and they made you hang on when you were walking around the boat,” Ledgerwood said.

“Sometimes they’d circle around come and have a look at you, and then just go away.”

It was an early November day in 1997 when Ledgerwood took the Shirley B out on the harbour, setting off from Dunedin and heading east towards Port Chalmers to fuel the boat up.

At Sawyers Bay, 11km up the harbour, Ledgerwood’s mate, Roy, called out.

“‘Oh, Dick. There’s something white in the water back there’,” Ledgerwood recalled.

The duo turned the wooden boat towards the frothing commotion in unusually shallow water near a sandbank. 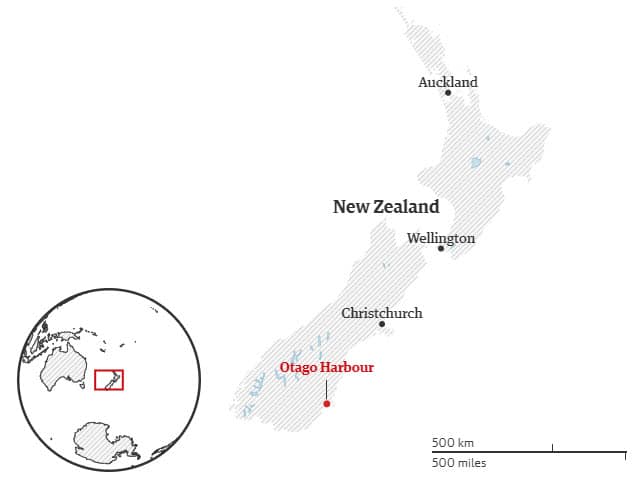 Ledgerwood: “It was two sharks wedged close together, and they were just revolving round and round, very, very slowly”. The pair of fisherman, both having spent decades at sea, “had never seen anything like it”.

They stopped the boat and stared at two, four-metre sharks “locked together” in just four metres of water.

Despite a 30-metre boat approaching, the sharks were “completely preoccupied”, Ledgerwood says, and the Shirley B drifted to within 10 metres of them.

“They just carried on with what they were doing,” Ledgerwood says.

“They were … locked together, and just revolving in slow circles,” Ledgerwood says, who estimates a full rotation of the sharks took about ten seconds, a movement he described as a “slow revolution”.

Their taut grey bodies were pushed closely together, belly to belly, Ledgerwood remembers, “revolving” the entire time: “They were clenched on”.

“We just drifted up, and they didn’t worry. I mean you wouldn’t, would you?” laughs Ledgerwood. “Well, I wouldn’t.”

A great white shark swims in waters off the Neptune Islands. Photograph: Alamy Stock Photo
Ledgerwood said none of the Dunedin old-timers had ever heard of, or witnessed such an event, and many could make no sense of what the ageing fisherman had seen.

“I honestly think some people thought we were seeing things, but we definitely weren’t, because we turned back to go and watch, to see what it was.”

The New Zealand Department of Conservation’s shark expert Clinton Duffy, calls Ledgerwood’s testimony “interesting and valuable”. However, his team has yet to verify it and says they would need images or video to do that.

“I have seen hundreds of great whites and I have certainly never seen anything like mating behaviour between them,” Duffy says.

“It’s hard to witness [copulation] for any species of shark. Globally, most of the observations are from aquaria. Great whites are large, highly mobile, and rare, and it really diminishes the chance you’ll be able to observe that in the wild.”

Duffy says it is likely great whites choose quiet, out-of-the-way places to mate, away from aggregation sites like seal colonies, which female sharks tend to avoid because there are too many males.

“It’s really, really hard to observe,” Duffy says, adding that basking and whale shark mating has also never been seen in the wild, among many other marine animals.

“It’s a bit fraught [pointer mating], and it’s dangerous for both sexes. Other sharks can attack the mating couple, or other males can try to mate with the same female,” Duffy says. “The marine environment is still pretty opaque to us.”

During copulation, male sharks use claspers to internally fertilise the female, Crawford says.

“Clamping down with their razor-sharp teeth in courtship nips on the female’s side. Evolution has kindly provided females with much thicker skin, very likely for this kind of protection, and then navigate through the dance to actually complete the act.”

And it is this “dance” that Ledgerwood witnessed in the waters off Sawyers Bay.

“There is only one other incidental, distance observation potentially describing this mating phenomenon in all of the scientific literature,” says Crawford.

“Going to completion with the kind of ultra-focused copulation spinning that Dick saw – that would be on the very rare side of things.”

The first person to report having witnessed great white sex was a Department of Conservation seal observer, also in New Zealand, who saw the phenomenon in Nugget Point, Southland, in 1991. He wrote a brief account of it for the department: “I have unwittingly been fortunate to witness a mating [between two white sharks].

I had thought at the beginning they were fighting as one animal appeared to be attempting to grasp the other with its great mouth, making great gouges in its side. However, they had eventually become motionless, one under the other, turning over from time to time belly to belly. This obvious copulation lasted some forty minutes before the animals finally parted and glided off in opposite directions.”

He did not agree to be interviewed by Crawford and his sighting has not been verified by the Department of Conservation.

Crawford says Ledgerwood’s account is “vital” to scientists’ understanding of the elusive white pointer, which remain hunted and feared in spite of their protected status.

From an ecological perspective, scientists cannot pretend to have a reasonable understanding of any species’ biology if they have never observed mating, Crawford says.

“Previous hypotheses have been put forward suggesting that we never see white pointers mating because they go off on some mid-ocean, deep-water migrations that would be difficult if not impossible to follow and observe,” says Crawford.

“If it turns out that white pointers actually prefer relatively shallow substrates to copulate on, this would have an enormous effect on our ability to protect these preferred mating habitats, especially during the mating season, from human interference.”

Duffy says while the numbers of Australian and New Zealand white pointers remain stable at around 750 animals, some continue to die in the nets of fishing boats, or tangled in shark lines that protect beaches. Globally, their numbers are dwindling, and they are classified as a “vulnerable” species.

For Ledgerwood, the experience is one he will never forget.

“They were still, y’know, active when we left,” he says.

This article was first published by The Guardian on 4 September 2020. Lead Image: There are thought to be around 750 great white sharks in Australia and New Zealand. Very little is known about how they mate. Photograph: Alastair Pollock Photography/Getty Images.