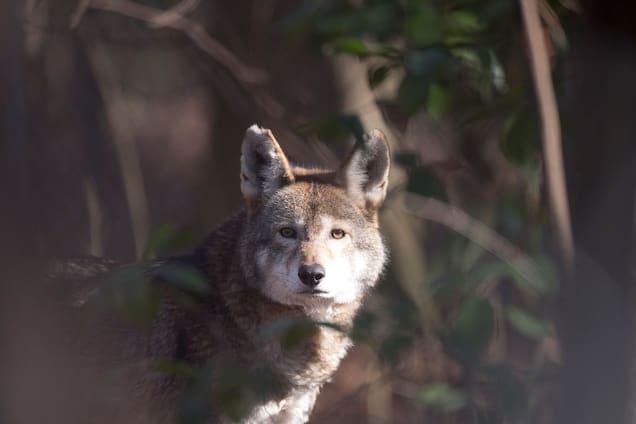 The red wolf, which once roamed all the way from Texas to New York, has dwindled to a wild population of around 35, found only in one peninsula in eastern North Carolina. On Wednesday, the U.S. Fish and Wildlife Service proposed allowing landowners to legally kill those wolves once they leave the confines of a small protected area known as Alligator River National Wildlife Refuge.

The proposal was panned by wildlife experts. The agency has “all but pulled the plug on the species,” says Michael Chamberlain, a biologist at the University of Georgia who has studied the animals for more than a decade.

Hundreds of years of trapping and hunting red wolves in the Eastern U.S. winnowed them down until they were declared extinct in the wild in 1980. Seven years later, a few animals were released as an experimental resettlement program in the Alligator River refuge, near where the Wright brothers tested their first airplanes.

It was slow-going, and local hunters and landowners would occasionally shoot a wolf. Many locals don’t favor their reintroduction, and from a distance they closely resemble coyotes, which are commonly hunted. Meanwhile coyotes would breed with red wolves, creating hybrids that watered down the gene pool.

By the early part of this century there were perhaps 150 red wolves in the wild, more than half of what the wildlife service calculated would be necessary for a sustainable population. Many have cited the success of red wolf reintroduction as inspiration for creating programs for gray wolves in Wyoming and Arizona. The increase in the population was credited to efforts such as coyote sterilization and legal deterrents—killing a red wolf can lead to a $100,000 fine and up to a year in prison, though it’s rarely enforced.

“The restoration of the red wolf is the first success story for restoration of wolves in North America,” says Chamberlain, who has studied them for more than a decade. “And it’s a crying shame, on many fronts, that it’s come to where we are today.”

Sometime around 2006, wolf numbers that had been on the rise numbers began to decline. The mortality rate quadrupled from the decade before, and locals started to complain the animals were hurting deer populations on private land. After a series of lawsuits, the Fish and Wildlife Service stopped sterilizing coyotes and introducing red wolf pups into wild dens outside of the national refuge. They also began issuing limited “take” permits to landowners who wanted to shoot coyotes or wolves on their land.

Such permits were allowed because technically, red wolves weren’t classified the same as a typical endangered species, since they were reintroduced and viewed as an “experimental” population. Fish and Wildlife says that almost 500 applications were made for permits, but just two were granted and only one ended in a dead wolf, a lactating female.

The wild population of wolves, which numbers 35 at most, roams a sparsely populated area the size of Delaware, though some individuals roam much farther. If the proposed changes go ahead, the range would effectively shrink to about the size of Chicago. (There are another 200 wolves in captivity.)

Only about a dozen of the animals live in Alligator River refuge, and the service plans to intensively manage this population to retain their genetic diversity and wild behaviors. The two dozen or so wolves outside this area would lose their legal protections and could be legally shot. The agency says it hopes to introduce the wolves elsewhere, but hasn’t specified where.

“We are going back to what we had in 1986—the lands that we have full control of. Because right now we have no access to any private land,” says Leopoldo Miranda, the assistant regional director for ecological services for the Fish and Wildlife Service. “We are regrouping and trying to gain control over the population within the lands that we actually control.”

The move has prompted fierce backlash. “If you can’t succeed in North Carolina, what makes them think they are going to succeed elsewhere?” says Joseph Hinton, a researcher at the University of Georgia who has worked alongside Chamberlain. “You think this animal is going to do any better in east Texas, Mississippi, Georgia, Alabama?”

Hinton says Fish and Wildlife buckled under political pressure, which sets a bad precedent. Miranda counters that you can’t do management without the cooperation of the locals. Both agree that the region has experienced a recent shift toward private property rights and mistrust of the federal government that had nothing to do with wolves.

Dan Ashe, president and CEO of the Association of Zoos and Aquariums—and former head of the U.S. Fish and Wildlife Service—expressed displeasure with the move, saying in a statement that the service “is stepping back from the wild population of red wolf.” But Ashe says his organization is “prepared to step up and continue to maintain a healthy, genetically viable population in human care.”

A public comment period for the proposed rule started yesterday, and runs until the end of July. If the rule goes through, it would take effect in November.

Of course, one concern for any population in such dire straits is genetic health. Red wolves are already highly inbred and their genetic diversity is on par with a population raised from just five animals (though the actual founding population was 14 animals). But shallow gene pools don’t necessarily spell doom for a species. Some have evolved mechanisms to recover from very low populations.

For example, Mexican wolves—a subspecies of gray wolves that once lived in Mexico and the American Southwest—bounced back after declining to a population of only seven individuals, without causing an outbreak of genetic disease.

Similarly, red wolves don’t seem to suffer from genetic diseases and theoretically could seed other populations. The difference is Mexican wolves don’t have hybridization problems. Red wolves readily breed with the coyotes that have poured into their former range. In fact, some have even argued that red wolves are nothing but a coyote/gray wolf hybrid, a hotly debated argument.

“This uncertainty about the genetic ancestry—is it a hybrid, is it not, how old is this species—has led to policy challenges and given groups who don’t want to protect the species more ammunition,” says Lisette Waits, a geneticist at the University of Idaho who has studied the red wolf genome.

Whether because of politics or hunters or hybridization, the dream of a stable wild population hasn’t been realized, and their future looks grim. While the gray wolves that are thriving in Wyoming owe some of their success to the red wolf, it’s small comfort to those who have dedicated themselves to their recovery.

“The notion that they are just going to [sustainably] keep a population of wolves on the refuge in perpetuity is ludicrous,” says Chamberlain.

This article was first published by National Geographic. Lead Image Source: PHOTOGRAPH BY ROBBIE GEORGE – Only abut 35 red wolves remain in the wild.