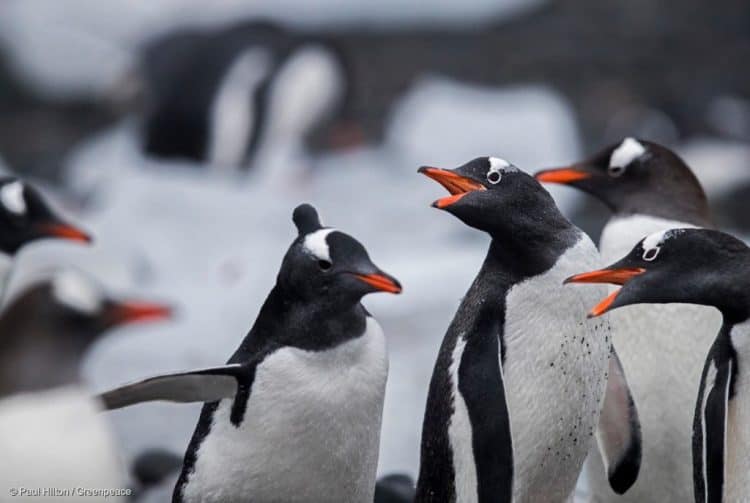 In Antarctica, it’s usually the whales, seals and penguins that take the spotlight, but a new report focuses on an animal further down the food chain: the Antarctic krill (Euphausia superba).

In a report issued last week, Greenpeace International outlines the vital role that this minute crustacean plays in Antarctica’s marine ecology and documents incursions of krill-fishing vessels into coastal waters around the Antarctic Peninsula.

The report claims that increased demand for krill oil coupled with easier access to the Southern Ocean due to warmer temperatures could result in disruption of vulnerable ecosystems.

The group is calling for krill-fishing companies to cease fishing in proposed marine protected areas (MPAs) in the Weddell Sea and other Antarctic waters.

To observe the krill and fishing industry firsthand, Greenpeace sent its icebreaker ship, the Arctic Sunrise, on an expedition to the Antarctic Peninsula and the Weddell Sea in January of this year. The crew, Casson told Mongabay, “saw krill vessels in the immediate vicinity of whales and penguins so that you can see that they are directly competing for the same food.”

Krill are the largest catch in the Antarctic, with up to 5.6 million metric tons allowed to be harvested each year. The current catch limit, divided among sub-regions of the sea, is meant to represent less than 1 percent of Antarctica’s estimated krill population.

“There probably isn’t a fishery in the world [with] a catch limit in place that is such a small proportion of what we think the population of krill to be,” said Keith Reid, an Australia-based science manager for the Commission for the Conservation of Antarctic Marine Living Resources (CCAMLR). The group, composed of representatives from 24 nations plus the European Union, all with commercial interests in the region, is in charge of monitoring krill fishing activity and closing sub-regions to fishing once a target limit has been reached. The system enables CCAMLR to manage the fisheries in a way that is sustainable for the Southern Ocean’s ecosystems, Reid said. He acknowledged that it is up to the individual nations to enforce compliance by their commercial fleets.

The issue isn’t with the amount of krill being caught, but with where they are being caught, according to Cassandra Brooks, an Antarctic policy adviser and assistant professor at the University of Colorado Boulder’s Environmental Studies Program, who is not associated with Greenpeace or CCAMLR.

The report includes a detailed map of krill trawler routes around the tip of the Antarctic Peninsula over the past five years, based on data from the vessels’ automatic identification system signals. According to Brooks, the map shows that the ships are coming very close to shore, including areas home to penguin colonies, which could endanger the penguins and other predator populations.

“This is the highest resolution [Antarctic] krill fishing data I’ve seen,” said Brooks, “[and] this data is actually hard to come by because it is proprietary and not widely shared.”

Greenpeace claims that these trawlers were fishing within the boundaries of proposed MPAs, an allowed activity that the group says the trawlers should end in order to preserve the habitat and food chain in these sensitive areas. CCAMLR does not actively monitor authorized fishing vessels’ routes and relies on ships to self-report when they enter a designated area to fish.

Greenpeace also mapped interactions between trawlers and the large refrigerated cargo vessels (also known as “reefers”) that take on catch and supply fuel to allow the trawlers to remain longer at sea. The report warns that rough water conditions during a fuel transfer could result in an oil spill that would damage the Antarctic’s near-pristine ecosystem. Some of the ships, said Casson, “have appalling safety records [with] very lowstandards in terms of pollution from oil and sewage.” In addition, Greenpeace has evidence that some transfers occurred in or near designated protected areas. The anchoring required to carry out the transfer can damage these sensitive seabeds and the animals that live there.

Overall, Brooks said the report did a good job presenting krill-fishing environmental and safety concerns, although she stressed that the issues have previously been raised by other advocacy groups and scientists, some within CCAMLR.

Scientists aboard Greenpeace’s expedition ship collected samples and video of the seafloor that revealed a complex invertebrate community, according to Casson. Various experts are scrutinizing the video footage to identify the species it captured and determine the uniqueness and vulnerability of the ecosystems. The group will present the results at CCAMLR’s scientific meeting this summer and may use them to bolster support for the proposed MPAs.

Designating coastal waters as MPAs is becoming an accepted fishing management tool in many countries. Evidence has shown that by eliminating or substantially reducing fishing, these areas can become safe havens for sea animals and biodiversity.

In 2016, CCAMLR’s members approved the designation of over 1.5 million square kilometers (nearly 600,000 square miles) of Antarctica’s Ross Sea as an MPA that came into force in December 2017. To reach unanimous consent required several years of negotiations. A proposal in 2017 to create a second MPA off the east coast of Antarctica did not garner enough support to move forward. Additional MPAs in the Weddell Sea and along the Western Antarctic Peninsula have been proposed by the EU and the Chilean and Argentine governments, respectively, but according to Reid, it has not yet been determined if either one will be discussed at this year’s October meeting.

Casson said that Greenpeace is particularly focused on protecting the Weddell Sea. Historically, sea-ice coverage has made the Weddell Sea impenetrable to industrial fishing ships. Greenpeace warns that the convergence of sea-ice melt from rising ocean temperatures and increased demand for omega-3 fatty acids derived from krill oil will encourage industrial fishing enterprises to expand into this newly accessible region. The report cites a 2017 market research prediction that global demand for krill oil will double by 2021, largely for dietary supplements, followed by food for farmed fish and pets, and pharmaceuticals.

Reid countered that getting into the Weddell Sea is still difficult. (Greenpeace’s own mission was forced to scale back its planned submarine dives in this region, according to Casson.) Furthermore, in Reid’s past decade working for CCAMLR, he said he has seen numerous forecasts of rapid krill-fishing increases that failed to materialize. “I remain alert but not terribly concerned,” he said, adding that he is certain that CCAMLR’s monitoring and trigger mechanisms are sufficient to rein in an uncontrolled krill-fishing expansion.

Greenpeace’s broader goal is to establish a network of large sanctuaries in the Southern Ocean. In the meantime, the group’s awareness campaign aims to encourage the Antarctic krill industry to voluntarily halt expansion into newly accessible waters. Casson referred to a similar concession made at the opposite pole in 2016, when the Arctic cod-fishing industry agreed to avoid fishing in thethawed waters of the Northern Barents Sea until a scientific evaluation can be conducted.

“There’s a precedent there of the industry actually working alongside environmental groups to not expand further into these areas that are sensitive,” Casson said.

This article by Kim Smuga-Otto was first published by Mongabay.com on 24 Mar 2018.